hello,
could it be possibe that in the next update, there would be a DEDICATED TAB for TIDAL MASTERS in tidal? such that when one clicks on it, all the MASTERS PLAYLISTS and ALBUMS will appear. under the WHATS NEW TAB, only the latest arrivals of masters albums appear. thanks.

There is this functionality, for both Tidal albums and playlists.

I think he wants to be able to browse/search every Masters album/playlist in the TIDAL catalog.

thanks for replying. there is a masters tab under the WHATS NEW category. but only the latest additions appear. the old masters albums and playlists are not included. a MASTERS CATEGORY, as i would have imagined, would include ALL THE MASTERS ALBUMS AND PLAYLISTS. also, for each genre listed under the GENRES, only the NEW ALBUMS, PLAYLISTS AND TRACKS have subcaterogies, but NO MASTERS SUBCATEGORY. 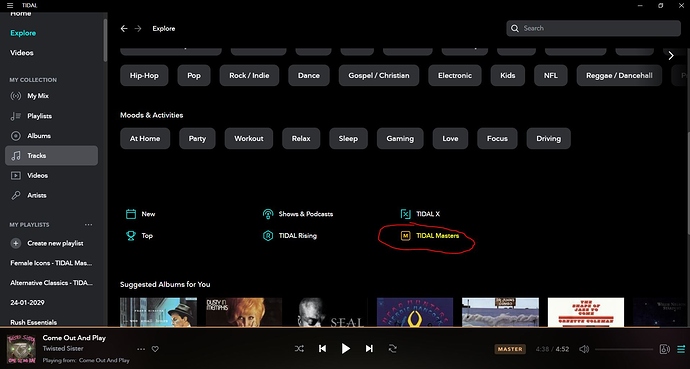 thanks. its just a suggestion, which could make browsing for masters easier in roon.