When I am playing music through Quboz that has smaller sampling rate than Tidal version, Roon plays the same music from Tidal even though the primary version is set to Quboz version.
Here is a screenshot that I was playing a Quboz file but it shows up as MQA version. 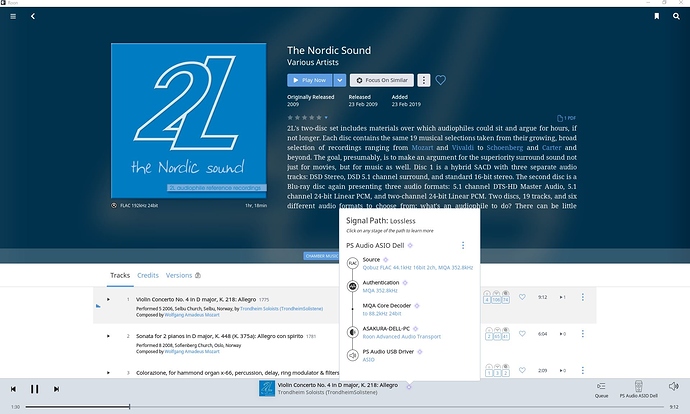 You are playing the Qobuz version. Some Qobuz tracks are in MQA.

All albums supplied by the 2L label to Qobuz are apparently in MQA-CD format, according to a spokesperson at 2L:

That’s interesting. Thanks for the information! Since it shows up as FLAC 24/192 as description, I was thinking it should show up as 24/192.

FLAC 192 / 24 is clearly incorrect metadata from Qobuz @support need to look into this.

However, the signal path shows you what’s really going on.

My guess is this is for Roon to raise with, or add to those already raised with Qobuz with the same issue.

The 24 bit 192kHz is being reported from Qobuz to Roon as a valid meta tagging. Roon doesn’t do scanning for streaming until it is being playback which is reflected on the signal path.

We are currently working with Qobuz to resolve an issue where the incorrect format is being displayed for some albums. I can’t provide any specific timeframes, but this is something we are looking to resolve in the future. Thanks for the report, we appreciate the feedback!

Sounds good! Thanks for the update for this issue!!