Ciao to all!
My Roon Core is currently installed on TS-451+ NAS.
I have a 2GB SSD drive (Sandisk Extrem Pro) that I plan to connect to the USB port of the NAS.
The idea is as follows:

The questions are as follows:
(1) do I get an improvement in the performance of Roon Core?
(2) If it is worth it, what is the sequence of operations? I was thinking of (i) moving the database to the SSD with the command you see in pic1 (ii) copying the music files to the SSD (iii) changing in Setting/storage/folder the Roon target folder (pic2). Is this correct?
Thanks for the support
Paolo 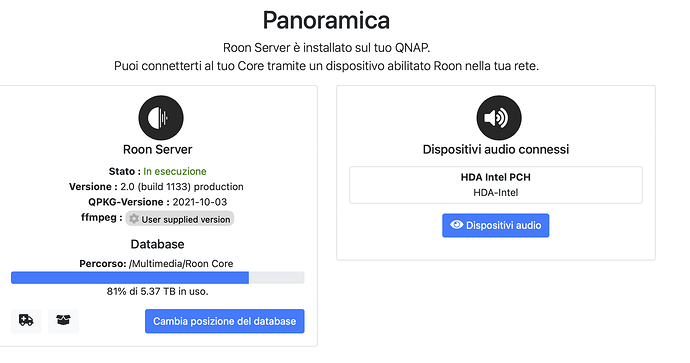 That NAS uses an Intel Celeron 2.41GHz dual-core processor. That is not even close to the minimum specification for a Roon Core. You need at least an i3.

Thank you! I know the configuration is not optimal but I can still listen to music, even through Roon ARC.
Since I can’t afford a new NAS now I wanted to know if migrating everything to an SSD attached to the NAS improves, even if slightly, the situation.

You can give it a try. The most perfermance inprovement comes with placing the Roon database on an SSD. Placing the music files on an SSD will not improve in the performance very much.

If you will use USB, then the speed will be limited by it (to a much lower value than that of an internal NAS disk).

It depends on the USB type: USB2 or USB3. Furthermore an SSD is internally much faster and therefore search an database much faster then a spinning disk.

Yes I have thought about this aspect… Roon Database would be in a device that has a write/read speed of 1000 MB/s and this could in any case improve performance despite the USB connection. I hope there is someone in the community who has done this test. Thanks!

Thank you Alfred. The NAS has two USB 3.2 ports.