… they are looking out for all audiophiles …

What! They’re not appealing to the pervasive apprehension that audiophiles are missing out on something?

MQA’s future (if it indeed has one?) is in streaming, and not in downloads, IMO.
You should always be able to buy the 24/192 etc downloads, but not necessarily stream them.
I can see a future where streaming platforms possibly move towards MQA for streaming, and the 24-bit files are available for purchase/download.
But I think we would be a few years from that.

I can see a future where streaming platforms possibly move towards MQA for streaming, and the 24-bit files are available for purchase/download.

MQA’s Director of Content Services is flat-out telling you that if they have their way, you are wrong.

Enjoy your music and stop being so grumpy!

Best advice in the whole forum.

All these fervent arguments regarding sonic events happening well beyond the range of human hearing have a distinctly ‘scholastic’ flavour to them.

My experience with MQA has been uneven at best; sometimes it sounds better than comparable Hi-res files, sometimes it doesn’t.

The only thing I’ve noticed that consistently improves my listening experience is 24-bit mastering and, generally, files issued at that rate. But I could be mistaken.

I can see a future where streaming platforms possibly move towards MQA for streaming, and the 24-bit files are available for purchase/download.

Don’t forget Qobuz is streaming unadulterated lossless FLAC up to 24/192k. Amazon has also announced their own Hi-Res streaming which doesn’t use MQA.

The only streaming provider is still using MQA is none other than Tidal. Since 2016 Tidal has never announced the amount of subscribers it has when compared to Apple and Spotify. This is NOT a good sign! It is just sitting on a cash cow that will soon run out unless Tidal can pull in more subscribers. Other streaming providers like Deezer has announced MQA support in the past but it didn’t materialised in the end. The others just adopt a ‘wait and see’ kind of thing. Announcement is one thing, implement the required streaming is a big gamble.

In a whole, Apple and Spotify will continue to dominate the world with their streaming for the masses. The music labels love them, they are the great source of $$$😄

A post was split to a new topic: Billboard article on Hi-Res music

Amazon has also announced their own Hi-Res streaming which doesn’t use MQA.

No they haven’t. It’s a “report” in the press, not an announcement by Amazon.

And if MQA becomes dominant in streaming, you can bet only MQA will be available also for hi res download when the MQA file exists. Possibly only MQA for CD download rates, too. The labels dictate what is allowed to stream, and if they can dictate MQA only, they will. So far MQA isn’t really a success, so they can’t.

Bob - and even more disappointingly, Peter Craven, who should know better, had two simple options.They could have:

They’ve had enough time. Time for us to vote against MQA with our wallets. It is nothing more than a lossy compression scheme - but dressed up as “Hi-Res” for the AudioFools.

Not sure what it is that I wouldn’t like. As far as I can see, just the MQA marketing machine at work again. Until I see peer-reviewed papers either proving inaudibility or exact waveform reconstruction, my view of this is the same as my view of any other unproven marketing claim. And I used to be a Marketing Manager

I want to believe that the digital process can be improved, but the blog is nothing more than innuendo and eye-swirling jargon.

Smoke and mirrors is how stuart has been trying to shill mqa to audiophiles. I just see the blog as a last-ditch effort to what amounts to a dead digital format.

Dead? I looked around AXPONA. Qobuz was everywhere. Many rooms had placards proclaiming that they were streaming Qobuz. They also had a table in the Marketplace, and David Solomon was performing flash DJ sessions in a handful of rooms to demonstrate and talk about Qobuz.

Tidal’s “appearance” amounted to a banner on the mezzanine. Only a couple of rooms showed mqa placards, and most likely just to show that their product had the capability. It wasn’t even mentioned by anyone I spoke with. Unlike past years, its presence was slim at best, and there was no more buzz about it.

While I understand the importance of bandwidth savings, the MQA team cannot produce results from a formal listening test to back their claims of a better listening experience.

That’s the thing. To this day, neither mqa nor stuart have offered a back-to-back comparison test of the exact same master, run through mqa processing. The smoke and mirrors, and his implied refusal to give such a comparison, gives us a wrong impression.

To be honest I don’t think you are getting a different master with MQA as often as you think you are. If you like the sound of MQA that great, but the M in MQA is just another marketing tool.

Labels aren’t hiring engineers to remaster albums just for MQA when the audiophile market is maybe .1%. MQA is not going to bring about better masters.

Precisely! Think of how many tracks are on Tidal right now. Do you think the labels would put a cent towards having these albums remastered (and, umm, “authenticated,” the “a” in mqa) yet again just for one streaming service on an unproven audio format that few care about? I highly doubt it. I would guess mqa is simply a process that could be run through an encoder, applied with a few mouse clicks in a digital workstation–all it seems to be is a lossy encoder that adds some mild DSP to cure what stuart feels is “blurring” in the digital domain.

I notice many of them have backed off. JA at Stereophile (just one example) was ramming it down his readers’ throats, and pretty much condescending to those commenting on his articles posted online. I even publicly called him out for gaslighting about mqa. I doubt it did any good, but not too long after, the propaganda stopped. I wondered what the motivation was to push something like mqa that had no clear benefit. And as I said, even at the last audio show I attended, it was maybe a blip on the radar at best, mentioned for compatibility’s sake mainly.

Thanks for the heads-up, looks like a fascinating series of articles.

That’s the thing. To this day, neither mqa nor stuart have offered a back-to-back comparison test of the exact same master, run through mqa processing. The smoke and mirrors, and his implied refusal to give such a comparison, gives us a wrong impression.

These have been available from almost day one.

The AES has to be careful not to become a mere backslapping and sales support organization. I wonder if they understand, or care, that Bob S is using them for apparent (not that everybody is fooled by this) legitimacy?

This is a prime example of what I was talking about. Redefining well defined terms. High resolution is well understood as a digital term. It is simple, not simplistic. Adding additional criteria serves only to obfuscate. The purpose here is not to communicate, but to mesmerise.

Here is their description in the glossary:

AES, Pro Audio world and those using it for marketing can all differ a little in their view of ‘high resolution’… per my examples of each.

So I’m not so sure about 'well understood as a digital term. It is simple"…

So I’m not so sure about 'well understood as a digital term. It is simple" …

No, it is that simple. You can tweak it here and there, but the principle remains the same: > 16/44 and defined digitally, not on some other basis. RIAA, CEA, and others all do it the same way. Indeed, everyone did it the same way until Bob S and audiophile trade publications decided to make their own version up.

Bob’s purpose is to obscure the definition with what it has never meant: lossy encoding, “perceptual” psychoacustics, and the like. His goal is to $sell$ you his closed, DRM codec.

You can follow him down the rabbit hole of non-digital, perceptual “phsyacustics” if you want but neither consumers nor the rest of the industry will be following you there.

I was very deliberately only talking about AES, Pro Audio and the marketing use of ‘high resolution’…

Here is their description in the glossary:

AES, Pro Audio world and those using it for marketing can all differ a little in their view of ‘high resolution’… per my examples of each.

So I’m not so sure about 'well understood as a digital term. It is simple" …

High resolution audio or ‘Hi-Res Audio’ logo means the audio signals have a frequency response beyond the CD range. It should be at least 30kHz and above. It doesn’t matter the bit depth, but at least 16 bit. SACD/DSD is in fact a 1 bit system samples at very high frequency and is certified by Japan Audio society (JAS) as Hi-Res Audio.
In fact 16 bit sampled at 88.2/96k is still considered Hi-Res Audio (minimum standard). MQA is around 17 bit 88.2/96kHz after it gets unfold, so it actually meet the minimum standard of Hi-Res Audio.

24 bit sampled at 44.1/48kHz is NOT Hi-Res Audio since the frequency response is similar to CD. You get additional dynamic range but not additional information in the upper range. So don’t get confused

24 bit sampled at 44.1/48kHz is NOT Hi-Res Audio since the frequency response is similar to CD. You get additional dynamic range but not additional information in the upper range. So don’t get confused

It seems everybody is confused… 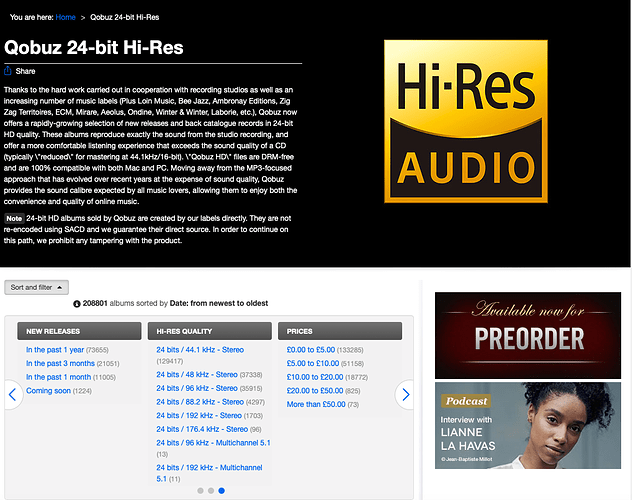