On the album Street Beat by Tom Scott (sax), Tony Scott is credited writing and performing all tracks. This is incorrect. I see that Tony Scott (presumably a clarinet player from born much earlier in the 20th century) has slipped into the credits on this album on allmusic as well: 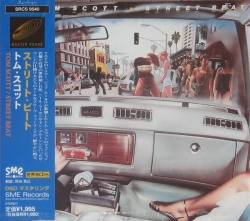 @jeremiah – can you report this to AllMusic?

I just reported a batch of metadata issues to Rovi, including this one. Thanks for the report @soundserge!