I have run across several of my Qobuz albums that all of the sudden have certain tracks marked as unavailable. I can stream these tracks on the Quoboz app with no problem. 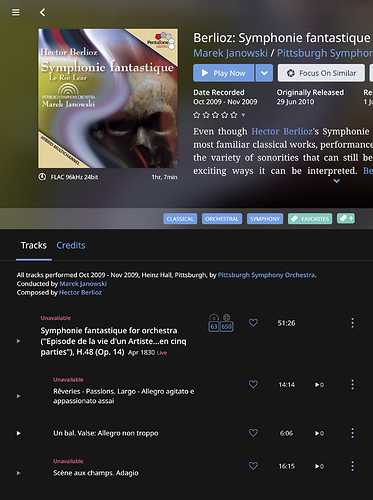 Just an update. I went in to the Quobz store to buy this album and the same tracks are showing as unavailable. So I went in to the Qobuz app again and I am able to stream these tracks (and not just a 30 second sample.). Weird.

This might be better in support, would you like it moved there?
I see the same thing, I’m based in the UK.

Sure. Go ahead and move. Thanks.

There are several threads on this topic affecting all roon Qobuz subscribers. The most up to date status is probably in the one below. The concern has been that this may be a licencing issue about which little could be done. But after a confused dialogue with Qobuz, the labels, distributors and licence holders, and a lot of finger pointing, that appears not to be the case (good news if true). As yet, though, there is no technical resolution.

I’ve just noticed a whole bunch of favorited albums in Qobuz, which did play complete a few days ago, are now incomplete with numerous “sample” tracks. On Roon, the indication of those sample tracks is not noted at all, only an error message in playback, while skipping to the first complete track. Annoying to say the least! A lot of classical albums on Pentatone. I can list more, but here’s an example: http://open.qobuz.com/album/0827949035364. Qobuz is rather difficult to effectively conta…