I just started playing Patty Smyth’s Greatest Hits Featuring Scandal which is a Tidal album in my library. As the first track started playing I noticed that the second track was marked unavailable. I checked all the remaining tracks and found two others were also marked unavailable. When the first track finished it skipped the second and continued playing the third track. Based on that behavior I realized I may have been having this issue for some time for this album or for other Tidal albums in my library and just not noticed it.

Here is the info on the three tracks marked unavailable: 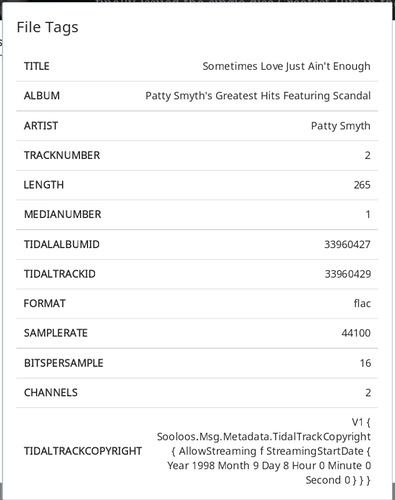 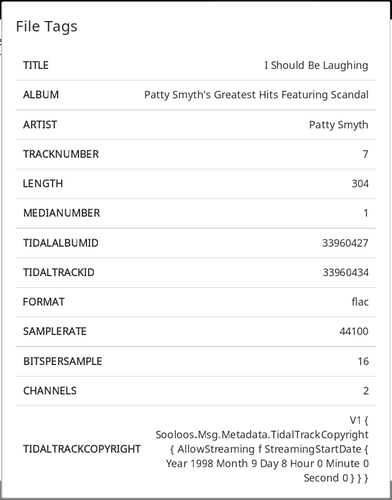 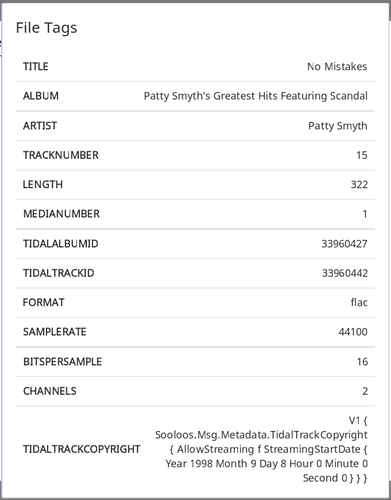 I’m seeing the same behavior with these tracks, both in Roon and the TIDAL app. When I try to play them in the TIDAL app I get the following message:

The Record Label does not permit streaming of this track

It looks like this is just a case of streaming rights for these specific tracks unfortunately.

Thanks for looking into this I should have checked out the album on Tidal but I never use it.

I looked more closely at the TIDAL TRACKCOPYRIGHT and noticed all three have an “f” after AllowStreaming even though they have what appears to be a valid StreamingStartDate. Tracks I can play have a “t”, I should have seen the “f” and realized that for whatever reason they cannot be streamed.

Seems odd that someone would refuse to accept payment for a track play even if it’s very small. Something would seem to be better than nothing and you can make it up after a fashion with volume. I guess the big names in music today can get a lot more from not streaming new releases but it’s very hard to see an upside to blocking streaming for songs recorded 26 years ago. And then there is the fact you can stream all three on YouTube and when I just tried them all only one ran an ad before playing and it was not the duet with Don Henley.

The music business has serious issues