I have been having an issue where I’m unable to identify certain new albums, even after the album becomes available on Tidal. For example, I recently added the album “9 Airs” by Leif to my collection, and it shows up as unidentified album, and the artist “Leif” shows up as an artist with nothing else in their discography if I go to the artist page.

However, if I search for “Leif”, the top result that appears does have the artists discography, including the “9 Airs” album, but it doesn’t show that I have a copy in my library. I have tried to identify the album, but it does not show up in the search options, even when I just search for the album.

I have tried to merge the artists by adding the Tidal version of the album (which links to the correct artist page) to my library and then editing the album but it doesn’t seem to work. I feel like I shouldn’t even need to try this approach - I should just be able to manually identify the album, since clearly Roon knows about the Tidal version already.

At this point, I have a backlog of a bunch of albums/artists that I cannot connect to their correct album/artist pages because Roon doesn’t let me identify the album that clearly exists when I access it through the Roon search.

Has anyone else had issues like this? Is there something obvious I’m missing that will let me properly identify these albums/artists?

Here are some pictures of what I’m seeing:

spoiler so it doesn’t take up a ton of space:

I should just be able to manually identify the album, since clearly Roon knows about the Tidal version already.

There is. Go to the unidentified album, And Either

A. choose the 3 dot menu, Choose Edit.
or
B. Click on the work Unidentified on the album page

Bothe will bring you to the Album Editor page, Choose Identify Album. It will give you a list of Roon immediate matches. If one shows up, select it. If none is right, Choose “None of these look right”, which brings you to a search screen that lets you input search terms and then you can select what is the closest match.

After you have selected the album, you will to the version selector page. 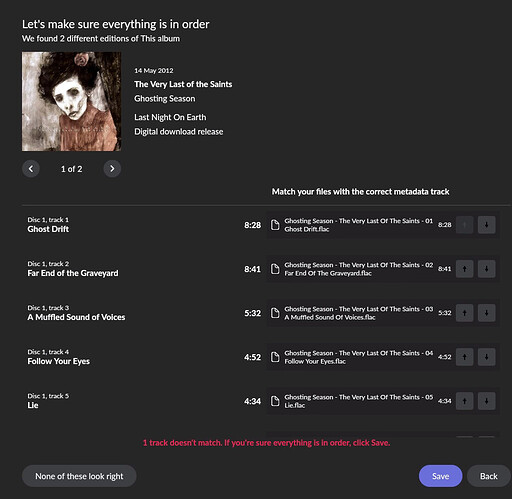 Under the album image there can be a left/right selector that allows you to scroll through the different released versions of the album. Once you get to one which is the closest match, you can verify the track information and move to correct them if necessary.

Hey @Rugby, thanks for the reply, but I’ve already tried this and have been unable to make it work for this album (and certain other ones). If you look in the images in my post I have a screenshot of the search results for this album, but none of those options are correct. I’ve tried removing the album/artist and just searching by just one of the fields, but the correct album still doesn’t show up.

I’ve used it to successfully identify other albums in the past, but I have a bunch of cases now where it doesn’t give any helpful results, even though I can find the Tidal version of the same album just fine. My intuition says that if Roon knows about the Tidal version I should be able to match this album up with whatever info that version has, but this identification tool doesn’t let me pick the correct album.

If you look in the images in my post I have a screenshot of the search results for this album, but none of those options are correct.

Hi Nolem, I’m sorry, I read too fast and did not see the pics at the end, so responded to a basic how to, rather, than to your specific issue.

I have tried Leif and yes, did not see it as an option under the identify search results, either. Did you get the album off Bandcamp? I might get it and give it a go, as I am big electronic/ambient guy. Was just listening to Stars of the Lid, when I read your post and starting listening to the Leif album.

I agree, that the data should show up since it is known to Roon, and something is not quite right; but, I am just a fellow user like you, so you you will have to wait for support to engage for deeper investigation. @jamie

The album also just came out, this particular case, might just be an example of it takes a bit of time before the identification data becomes available to Roon. Do you have an example of an album released awhile ago that has this same issue.

And yes, this was from Bandcamp

The album also just came out, this particular case, might just be an example of it takes a bit of time before the identification data becomes available to Roon. Do you have an example of an album released awhile ago that has this same issue.

Most of my issues are from recent releases, but here’s an example from an older one. I know my tags/names are a little messed up, but I would still hope to be able to find the correct album using the search tool. 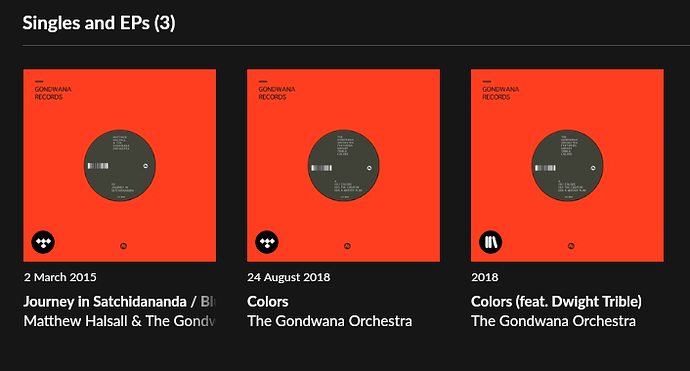 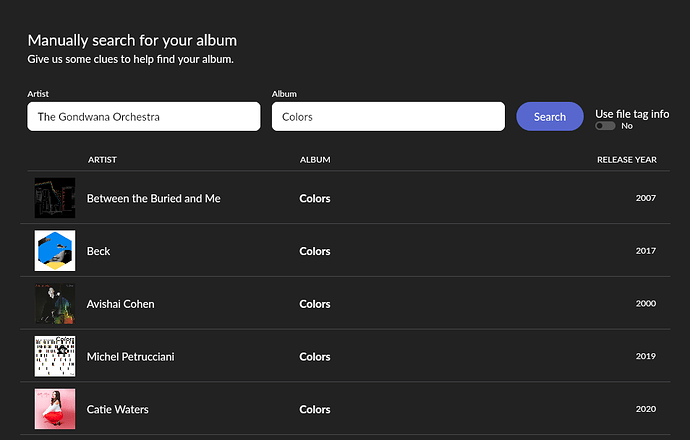 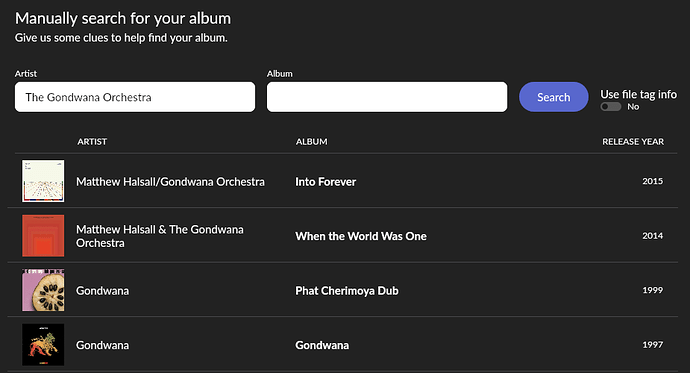 Also, interestingly, my version of the EP has 2 of the same artist. I’m not really sure what’s different between them, but I suspect one of them links to the weird version similar to the empty ‘Leif’ one above, and the other is for the one that the Tidal version links to. This may have been something I manually edited in the past to attempt to get Roon to identify the album - it’s been a while since I touched this one. 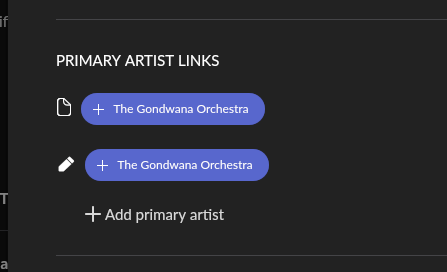 I know this was a while ago, but just wanted to show how this is still an issue for me. With a recent album, I am unable to identify it even though I can view the Tidal version right next to it. When I add the Tidal version to my library, they group properly, but it still remains unidentified, and I’m still unable to group it. After removing the Tidal version from my library they stop being grouped. Here’s a video: 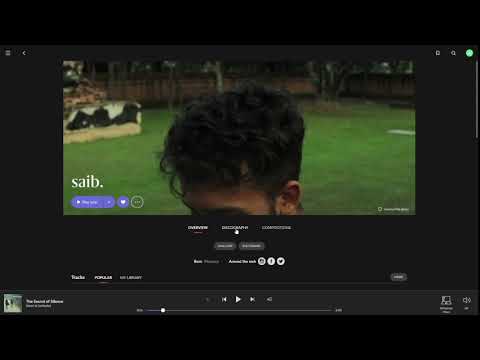 It’s quite frustrating because they’re literally grouped up, yet somehow I’m unable to identify the album. If there was just some way that I could paste in a tidal link or something to identify an album I could probably fix all of the issues in my library, because this manual search box does not function properly.

The issue that you’re running into is occurring when our metadata providers don’t have these albums in their database. In some cases, such as the Leif 9 Airs album, these titles are added to their information shortly after release. That album can be matched now in Roon. Unfortunately, the saib. album you’re trying to identify falls within the scenario I described, it isn’t in our metadata providers’ information.

Grouping your local album with the version from a streaming service provides a way to set primary versions and tidy up your library displlay. It won’t, as you discovered, work to identify an album. Breaking the group when the streaming version is removed from your library is normal behavior.

We’re currently working on improvements to album identification that should remedy what you’re running into. We apologize for the frustration this has caused you. We want to get this resolved but adding additional metadata sources takes some time in order to ensure that the integration is working as intended and doesn’t result in unwanted regressions elsewhere.

Gotcha, that makes sense. I appreciate the reply and I’m glad to know it’s being worked on!