At approximately 9.00 am this morning (Aust) Roon stopped playing Qobuz and I lost all Qobuz information from my system. Did the normal things but ended up logging out of Qobuz, restarting Roon, signed in again, restarted again and then resynced.
All the information from Qobuz repopulated into Roon, however I now get the following message that “the track is unavailable” for any song added since 8 September. Only those, even if I played them yesterday, last night, or this morning already. They are now “Not available”
Please note this is not a networking issue, as you can see from the screenshot that I can play Qobuz files just fine, as long as they were on my system on or before 7 September. Running latest version on Core and all remotes which were all updated yesterday.
Tidal and Local files all play ok so am assuming that this must be a Qobuz/Roon hiccup after the update yesterday. 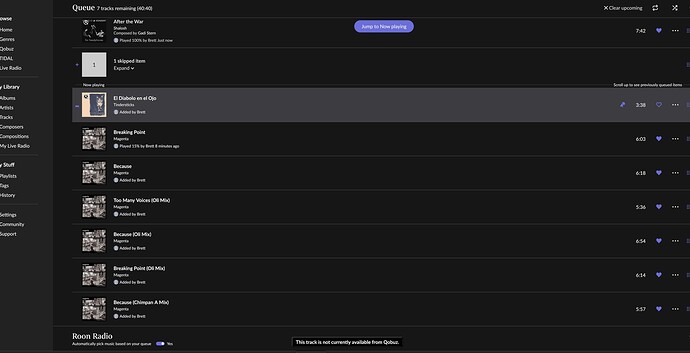 Third part has happened to me before on 3 or 4 separate occasions. Tended to be traced to an infrastructure issue on either side limiting sync for certain customers.

I had just updated Roon ROCK Core on Intel NUC if that helps?

I experienced this on Wednesday afternoon.
Reboot of core fixed it.

There seems to be some Issues with the Qobuz Service at the moment.

Assume the disappearance of albums is just related to a failed sync to servers that aren’t responding.

Expect they will all reappear (without restore) when Qobuz has sorted out at their end.

Time to enjoy the local library