A few days ago I purchased a NUC to install Rock. Before that i used to run Roon server from a Windows computer and I played my complete library containing flac, m4a, mp3, dsd files.
Now I can only play flac files from my NUC.
I throughout the problem was the codec ffmpeg. I copied the files several times from different Linux an Windows computers to the codec directory, but the problem still continued. The Roon core still gives the massage that the codecs are missing.
I searched this forum but I can’t find the solutiion for this problem. Who can help me.

Which file exactly did you copy from which distribution point to which directory on the ROCK?
Sounds like it isn’t installed correctly hence the need for detail.

I used the source that is advised by Roon on their page about Codecs. I used 7Zip to unpack and copied the ffmpeg file to the Codecs directory on my NUC

Which file did you copy. If it isn’t working then @support will need the exact information.

From ffmpeg-git-64bit-static the ffmpeg file 70,5 mb 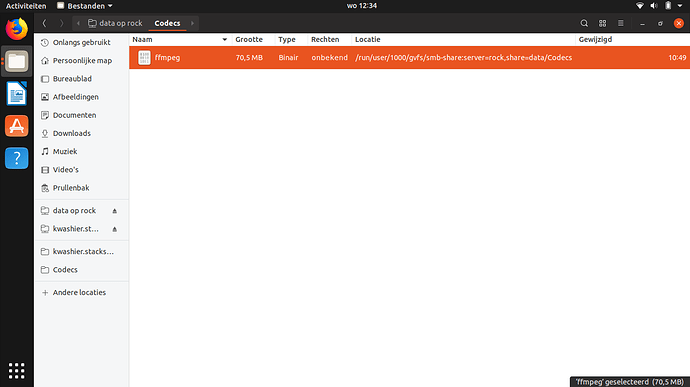 Did you reboot after installing it?

I see you are using linux… make sure the file is 777 – some linux smb installations muck with this.

Yes i did several times

if you go to the web ui, what does it say? any error about missing codecs?

Yes, every time it says: missing codec. What’s puzzling me is the fact that I can play flac and dsd files…

ffmpeg codecs are only used for mp3/aac

this means the file is missing or the perms are not executable.

does the webui say anything else?

I don’t know what happend. … but it’s working!
Thanks for all your answers and help!

There are a few situations where ROCK will attempt to chmod the ffmpeg binary on its own if it is wrong. I bet one of those conditions triggered.

I’ve seen Linux smb mounts get the files over to ROCK w/o the execute bit set, even though it says its 777 on your Linux side.