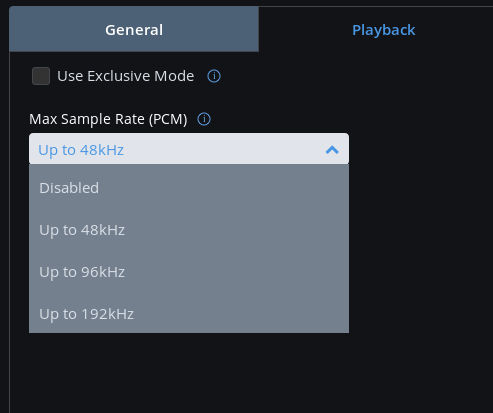 Please add an option for “Up to 44.1kHz”
There are certain playback situations where a user desires to force everything to 44.1kHz

There are certain playback situations where a user desires to force everything to 44.1kHz

When would that be desirable??

@Ronnie When playing back through certain DACs or other audio transports that are sample rate constrained - either because they only support 44.1 or the audio transport is sample rate locked into 44.1 (ie: in a pro audio environment)

Hi @ncpl. In an audio production situation, where a DAW is fixed to 44.1 for mixing or mastering, the audio interface device (transport) may also be set to 44.1. There are still many reasons to mix and master at 44.1. Using Roon to playback content from a local library is awesome, but it doesn’t work when the content is at different sample rates because audio won’t be heard when Roon attempts to playback at native sample rate which differs from the audio interface and DAW set to 44.1. In this case the DAC itself is not the limiting factor; the DAC can go as high as 96; the issue is the default sample rate of the audio project in the DAW and the primary audio interface (transport). There are other scenarios, like in a live playback situation over a Dante network that may have a fixed sample rate of 44.1 (any node on the network might be forced to 44.1 for any conceivable reason) and one might want to use Roon to playback content of a different sample rate over this network. By having an additional option of “Up to 44.1” (which would force downsampling of higher sample rate content) this would permit broader usage of Roon. Roon already has the ability to cap (ie: downsample) to 48 or 96, I am submitting a feature request to just add 44.1. Does that make sense? I recognize the above is in contrast to the audiophile purist approach of avoiding SRC whenever possible and always playing at native sample rates.

When we add more comprehensive DSP/sample rate conversion support, you’ll be able to define X->X mappings for each sample rate if desired, including remapping the whole world to 44.1 if desired.

Building more comprehensive DSP functionality is in our roadmap, but we don’t have a release date attached to that work yet.