I believe this is a logic flaw of a minor sort. Consider this picture: 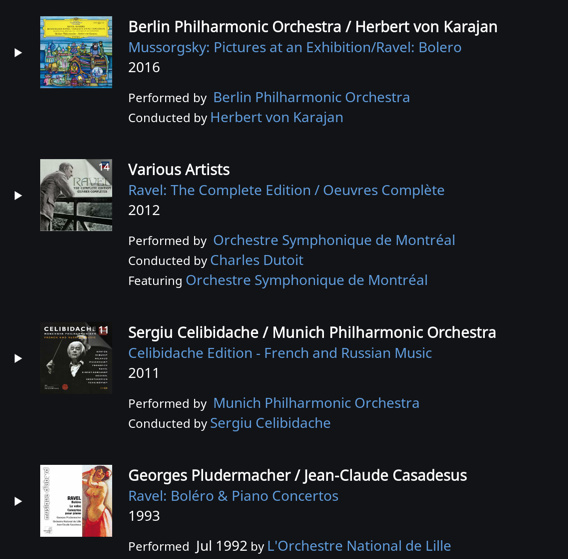 With one exception, all performances are titled with Album Artists (which are munged, I think, by Roon logic, i.e., 'Artist1 / Artist2…". This seems proper.

One album however, has Various Artists as the Album Artist, but with Ensemble and Composer available at the track level, i.e., “Orchestre Symphonique de Montreal / Charles Dutoit”.

I suggest a simple change to use track artists where album artists are unspecified. After all, “various” artists can’t be right for a particular performance.

John, where’s that screenshot come from? I don’t recognise the layout from any of the browsers in the desktop clients. Is it a tablet UI? Thanks.

The Performances page in Roon on a MBP…partial page

Ah, got you - it’s a view I very rarely use. What’s happening (I think) is that the Album Artist is being displayed, and because the performance is coming from a compilation album (which will have Various Artists as the Album Artist), you get this result. I’m seeing the same thing here, where “A Song Before Sunrise” has three performances in my library, two of which are on compilation box-sets: 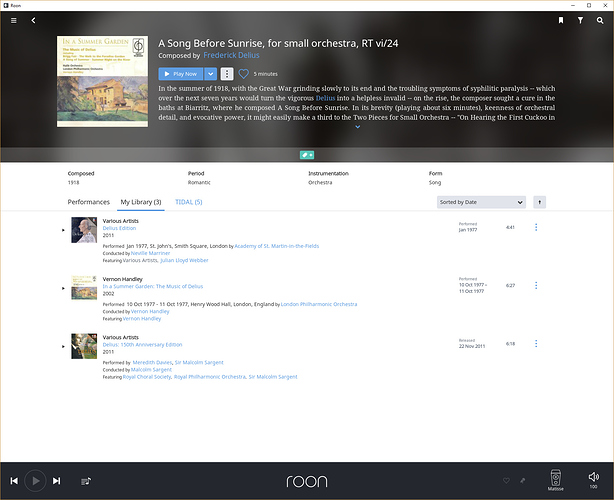 Yeah, I think you’re correct. I was just suggesting Roon do something Like:

“various” artists can’t be right for a particular performance.

I would even go so far as to use this logic all the time.

I would like to see this as well. I use that performances screen all the time. Probably the one I use most.

And, if you use performances a lot, I’ll bet you’d like a way of flagging your “most” favorite performance, or maybe rank ordering them.

But hearts are given only at the Composition level, and “Picks” are only given at the Track level. What to do, what to do?

Yep, that’s exactly what I would like so I could fine tune radio behavior.

But hearts are given only at the Composition level, and “Picks” are only given at the Track level. What to do, what to do?

The whole issue of manipulating performances is well understood by the team, and is on the map. It’s just not an easy fix. Defining “performance” isn’t as easy as it looks.

I’m only a recent convert. Did Roon make some “catastrophic” missteps in their design or model at the beginning? I’m not suggesting anything negative; just like to understand their history.

No Roon didn’t making any “catastrophic missteps”. Many structural aspects of Roon have been readjusted since release as a result of the experience the team has gained over the past few years.

This is just one such readjustment that hasn’t happened yet. Many have, including some critical to all users.

Just wondering. They emphasize getting it right and they’re deliberate, and I applaud that, but sometimes that can throttle progress.

Fair enough, but I for one am happy they haven’t done anything dumb in the name of progress!