Yeah, that’s an inescapable engineering reality–there can only be one master clock during playback, and most devices don’t provide a way to make slight adjustments to their clock frequency, so during multi-zone RAAT playback, we choose one of the endpoints to be the master and the others must make adjustments to conform to it to it.

Could we (users) choose? Ie could we designate a preferred zone to be the master zone when grouped (for me my main hifi - Devialet - in the lounge) and make others follow? Or even set a priority order depending on whats being grouped, so say someone with three mega systems can set their priority so the better kit is always in control in their various groups.

I think this is the first time the idea has been floated in public–few people even know to ask the question.

Every time I have had that thought (more than a few times…), it has been accompanied by a struggle to figure out a way to present that setting that will be comprehensible to more than a small handful of people, and then a realization that the incremental benefit for those people is still fairly small.

I think I could be convinced that it was worth the complexity cost, but I haven’t found an argument that pushes it over the line yet.

Every time I have had that thought (more than a few times…), it has been accompanied by a struggle to figure out a way to present that setting that will be comprehensible to more than a small handful of people, and then a realization that the incremental benefit for those people is still fairly small.

Oh, I don’t know, I think you’ve got a pretty technical crowd here, and I’m sure the setting would be understood a lot more than a ‘buffer to the power of two’

How about ‘make master clock when grouped’ or something. Or ‘group clock priority (1,2,3)’

But yeah, I get that it’s a lot of effort and possibly little benefit. Still, if it were available one day I’d use it - I’d much rather keep the lounge hifi running its best when grouped, and have the raspberry pi’s and kitchen speakers ‘messed with’. Don’t let it hold you back incorporating other DSP like room correction though

I guess you’d also be a bit stuck if the master disappeared, although I guess that’s the same now with your auto-designated device.

As always it’s great to know you guys think about all this stuff… I would never even have been aware, but now I am…

Perhaps rather than create a new UI control, just make the first zone clicked when grouping zones the master zone.

As long as that behaviour is explicitly stated in the user guide, then that seems like a reasonable approach to me…

The problem with using the first zone as the master is that we already have rules about the first zone being the one that preserves its queue/nowplaying information when the group is created. So it creates the potential for situations where the queue you want is not the clock you want. I like this more as a setting than an easter egg.

I just thought of a place to put this setting–we need to add settings for fine synchronization adjustments for RAAT devices anyways since there are many systems that are unable to accurately report their output delays to us (either sloppy USB DAC implementations, or situations where DSP follows S/PDIF).

They could fit on the same settings screen together fairly naturally (perhaps, a reorderable list of devices that had an input box on each line for the adjustment number…). I think it could be made comprehensible.

I’m tentatively putting this on my list to do this alongside the sync adjustment settings.

Just have all the available zones in an ordered list - higher = better clock. Just the same as people already cope with for network settings.

Maintain a list (at Roon, not local) of clock quality and base on that. So a “Linn Klimax DS” would be higher than a “Linn Majik DS” etc. It’s pretty unlikely that people would have competing systems (By manufacturer) in the same house so you should avoid the Linn better than Meridian debate.

Interesting discussion. Let me say upfront that I’m no engineer just an audiophile, but this clock discussion (read any material on “why my DAC is better”) has been coming on strong for the last several years. Having said that:

Rather than let the end user select what they believe to be the best clock, is it possible for Roon to “test” which clock in the system is the best and then make that one the Master? It would also be illuminating if Roon could then display which clock it is using. It has the added benefit knowing that Roon ALWAYS has the best Master Clock selected. It might even reduce audiophile angst.

The results could upset some folks who think they have bought the best, but testing (via Roon) doesn’t verify it. Might make it tough for Roon the company when hardware manufactures complain too.

Sounds like an interesting idea. I guess from my POV even if Roon tested and found the clock in the raspberry pi to be better than the Devialet, I’d still want the Devialet as master.

It’s not so much about ‘what’s best’, but leaving the preferred hifi system working as intended with its own clock intact.

I guess it partly depends on format compatibility too. As it stands (if I remember correctly) even if the Devialet could be set as master clock in a group, it’s sample rates/bitrates would be lowered to match the weakest device as they all get the same stream.

I can imagine it’s tough to measure clock accuracy properties without additional gear.

We have the stats. This is not true for the majority of our user-base–there are customers with high-end gear who follow the pattern you describe, but lots more people who have a mix of airplay, computers, Roon Ready, etc from a bunch of different vendors. For many people who have lots of stuff at different levels spread around the house, Roon is the software that enables them to tie that together (in other words, we attract this sort of user).

Rather than let the end user select what they believe to be the best clock, is it possible for Roon to “test” which clock in the system is the best and then make that one the Master?

The purpose of selecting the best isn’t actually to get the highest quality clock to control the system–it’s to prevent drift correction artifacts from impacting the most quality-critical zone in the house.

But, I want to discuss the idea of “best clock” a little bit too…

There are really three properties you could test–jitter, frequency, and the derivative of frequency.

We can’t, and don’t need to measure jitter from Roon, so forget about that.

Frequency and its derivative, we could measure, but only relative to the low-quality system clock in your computer. So the quality of the measurements can’t really be trusted.

The theoretical best clock on earth has no jitter, is bang-on the frequency it’s supposed to be, and never varies from that frequency.

There are some that approach those ideals pretty closely, but nothing is perfect. A lot of R+D effort goes towards reducing jitter, so those numbers tend to be very good in high-end gear. Getting the clock frequency and its derivative stable is more work (and not as critical to sound quality outside of these multi-zone cases) so it gets less attention. In particular, clocks are vulnerable to changing their frequency based on the ambient temperature (except in a very few devices that use oven controlled oscillators).

If we were going to do something automatic, it would probably look like this: lock onto the clock of each zone, and synthesize a new clock in software that moves forward at the average rate of the device clocks. Then, send audio out at that rate. This spreads out corrections more fairly amongst the devices.

A problem with that idea is: if you have a very bad zone–something who’s clock is out by 200ppm, say. Right now, it suffers alone. . In a world where we are averaging, it would distribute its badness to the nicer gear.

I can imagine it’s tough to measure clock accuracy properties without additional gear.

[quote=“hifi_swlon, post:34, topic:8542”]
It’s not so much about ‘what’s best’, but leaving the preferred hifi system working as intended with its own clock intact.
[/quote]Totally agree, and no amount of automated logic will even know that … so it best to have it user selectable.

I’ll just say 'it’s complicated" and leave it at that. I trust Roon will make the best decision, as you always seem to do!

We decided to go for a simple but functional approach here: 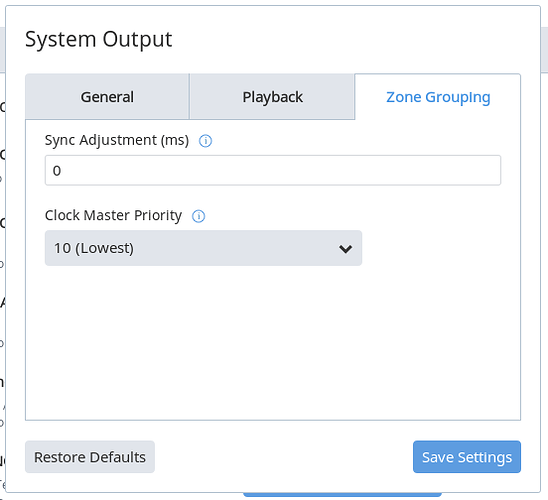 Well, each group is based on a zone. Additional zones are added to an existing zone to create a group. That group is tied to the original zone from which it was created. The logical thing seems to me to make the device associated with that zone be the master.

This doesn’t require any changes to the UI and is completely deterministic to anyone who cares. In fact, it is probably what people do anyway so it just happens correctly.