Using RoPieee as a wireless display

Was just wondering if it’s possible to use the display functionality within RoPieee wirelessly? I have another Raspberry Pie that actually plugs into my HiFi setup and streams music however it would be cool to have the little display on the other side of the room where I sit that just always shows what is playing and maybe even can control the music. I know chromecasts can be assigned as displays and will automatically just display when a certain endpoint is active however I’m not sure this is the case with RoPieee if it’s not the actual endpoint that is streaming ?

The RoPieee display can be attached to any Roon Control Zone, so this is a normal use case: small RoPieee streaming to DAC, with another running a display somewhere much more visible.

Brilliant! thanks for clarifying

What would be a fitting Pi to use solely as a Ropieee display / controller?

It seems a Pi 4 is wasted and hot.

On the supported hardware list, the original Pi Zero (I have one in a drawer) is not listed, however I don’t know if the current list of supported hardware is related to audio streaming support - which is not what I am intending to do, I just want to control a Roon zone with a display.

Thnx for any insights.

I’ll reply to my own post - it would seem a Pi Zero 2W is perhaps the most fitting Pi variant if audio streaming is not the intent, and is listed as compatible for Ropieee NG and, I thus assume would ofcourse also work with the official Pi 7" Display.

Yes. I have been using a pizero2w with the NG version. I have not tested with a display but it should be fine. Use the pi3 image.

I use a Pi3 for my 4 displays, and they work very well. I am committed to wired connectivity, so the larger form factor is actually easier. Does the Zero 2 have the correct display cable port?

It is true that the displays generate more heat, so that is a consideration. Open backed cases are better in this regard.

thanks for asking that question, which I never asked myself. I found the answer here: Pi Zero 2 W 7" Display Compatibility.

No, that is not possible as the DSI connector is missing. Use an HDMI display instead, or connect a display using the GPIO header (e.g. via SPI).

Soooo, that’s a bummer. I have a Pi 4, bought back when it was 60 EU - now they go for 140 EU - running Ropieee NG to a USB-connected Schiit Modius XLR DAC. The Pi/DAC and the XLR cables going to the amps (monoblock Hypex NC400) are not really in a place where I would want to try and interact with a display - hence my interest in reading in this thread about the concept that you can run Ropieee just to use it with a display some place other than where the music comes from.

I think maybe a Pi 3 then would be an option… the idea was to use Wifi and only have to run a power cable, don’t know how good Pi 3 Wifi is (not great I read, but… maybe good enough for displa data.)

@spockfish May I ask if a Pi 400 might also work with Ropieee? It’s easier to get those than a Pi 4 B, and as far as I can tell, they use the same CPU and other supporting hardware, they just have a different form-factor.

Should be. It is prepared, necessary stuff is in place, but I have not be able to test it for real.
If you get one I’m sure we’ll get it to work.

thanks for your willingness to have a look at it, it would have been an interesting experiment, but after studying the pictures of the PCB, and finally looking at the IO specifications of the Pi 400, it like the Zero 2 W also does not have a DSI connector.

For those interested, the Pi 400 is identical to the Pi 4B but has a 1.8GHz clock on the CPU compared to the 1.5GHz of the Pi 4b, and it is missing the camera connector (CSI), the display connector (DSI), a USB2 port (used internally to connect the keyboard), and LEDs on the Ethernet jack.

The Pi 400 would probably make a fine Roon Endpoint with Ropieee, but as my use case is - as the OP was also interested in, which is why I posted here - to use Ropieee with an official Pi 7" touch display to control a Roon zone, the Pi 400 is not suitable.

I managed to find a Pi 4b 2GB [plenty for Ropieee] on eBay for a half decent price, and that will then be my Ropieee display front-end for my stereo. 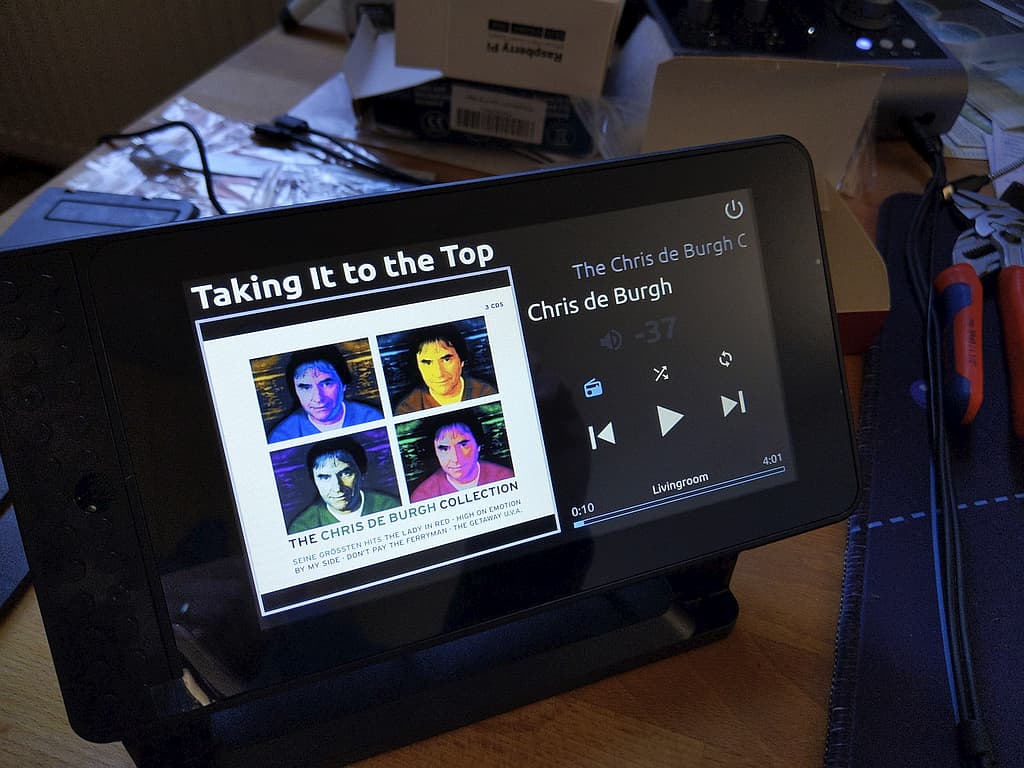 This is a Smarticase SmartiPi Touch 2 case with the official Pi 7" touch display, running Ropieee on a Pi 4b.

Ropieee is a charm to setup for the display. I see that by default it’s even inverted, but that was trivial to set to back to default orientation via the excellent display control panel. It couldn’t be easier.

There’s certainly no excuse for me not making a donation, Ropieee is just too cool and now powers my stereo and the Roon remote display.

@spockfish : I have one silly question though: seeing a tracklist or picking albums is not possible, I discovered. I’m sure I didn’t pay enough attention to pick up on that – the remote display is still very much of interest to me and anyone in the room who wants to know “what’s playing right now?” and “can you turn the volume up/down?”.

Still, I’m a bit dejected as I didn’t manage to get away from having to deal with a smart phone to listen to music in the living room.

I’m thinking a bit of how the Squeeze Boxen used to work… it looks very similar in this display case! Um… is this something you might eventually add? Just asking. =]

I have a question, for anyone also using Ropieee Display: 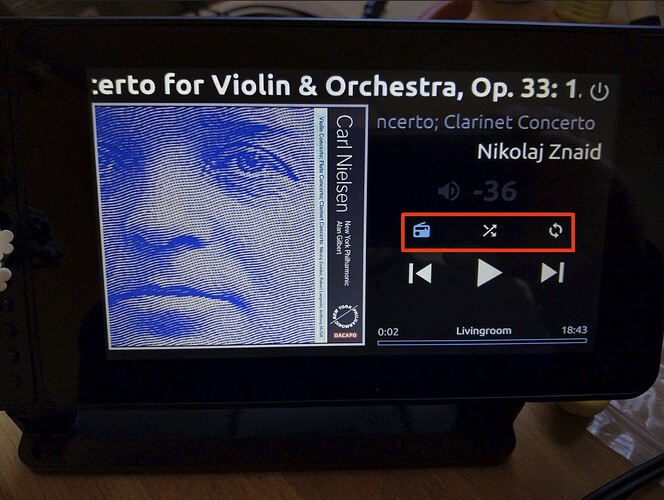 What does the leftmost option symbol (highlighted in red) set? The other two are random play of songs and the right most repeat the playing song… but the left one didn’t seem to make a difference having it selected or unselected.

PS. @spockfish The whole family is happy to have a permanent display of what’s playing, independant of smart phones or PCs or laptops, right there where the music is (in the living room), in a position (on the book shelf) that is indepedant from where the other Ropieee Roon bridge is located and connected to DAC and amps.

That the display has extra functionality allowing volume adjustment and pausing and skipping songs is icing on the cake.

The left icon us Roon radio.

Meaning, if it’s switched on, then when ending the current playlist, the zone will possibly start playing Roon radio stations?