“Composed by” information is mostly wrong.

Thanks James for bringing this up.

I find this can happen quite a lot for Lieder, but often it is not the CD that is wrong but the composition itself. Most of the time I have the composer in my tags so I was puzzled why with so many CD’s roon was giving me two composer credits. I have the same CD as you so I get this: 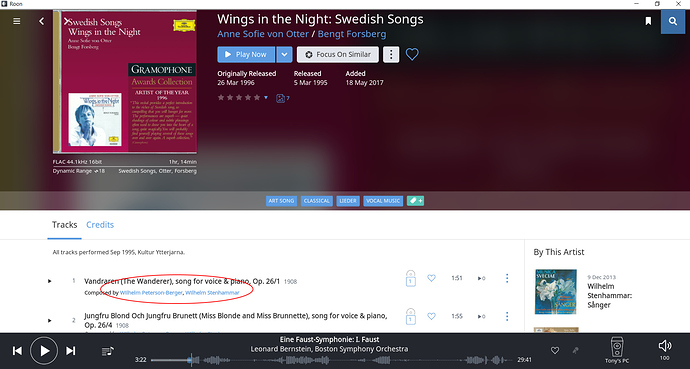 At first, I just assumed that the 2nd composer was the lyricist and roon was giving me more information than I had in my tags. Unfortunately this is not always the case. It’s unpredictable and sometime the composer is just wrong in the composition screen and that is the only place to fix it. So with the first track on that album the only place to fix the problem is in the composition screen: 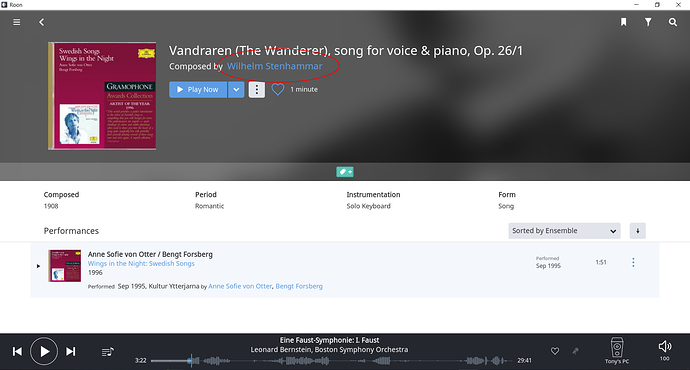 I cannot imagine any systemic fix for this unless the metadata suppliers have an initiative at their end. Lieder is particularly vulnerable. I have a lot of Lieder but there is much more I don’t have and I don’t have a Tidal account so I don’t know how widespread this problem is. Personally I have given up trying to fix it systemically within roon and just make edits with favorite discs or where the errors are obvious or are annoying me.

I actually find the problem much worse with pop music. The problem is not quite the same but has a bigger impact on my listening. Many songs have long lists of composer credits. It’s all down to the economics of the music business and to ensure all band members and contributors at least get paid royalties. But I find that small differences in spelling (Dave instead of David or Phil instead of Philip), or one or more missing composer credits will mean that that roon will not make a composer ID. Rather like classical compositions I like to collect pop/jazz standards and mixes together as well and use them as the basis of more eclectic playlists. One day I would hope that “radio” could take advantage of this and make more interesting and varied radio queues of little played and more unusual covers. But getting a composition ID in every case can be a challenge and I would prefer if roon could make more composition ID’s with more incomplete tags.

It took me a while to find “composition screen,” but I think I have. But it gives the correct composer (see below for track 1), and I still cannot correct the error (Wilhelm Stenhammar for “Composed by” in the album view (see below, second piece). 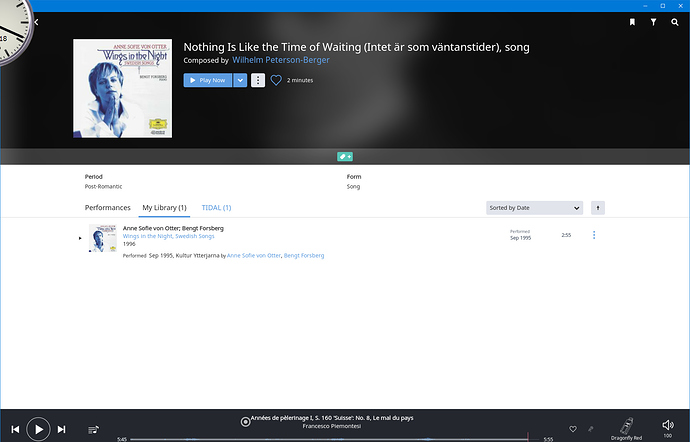 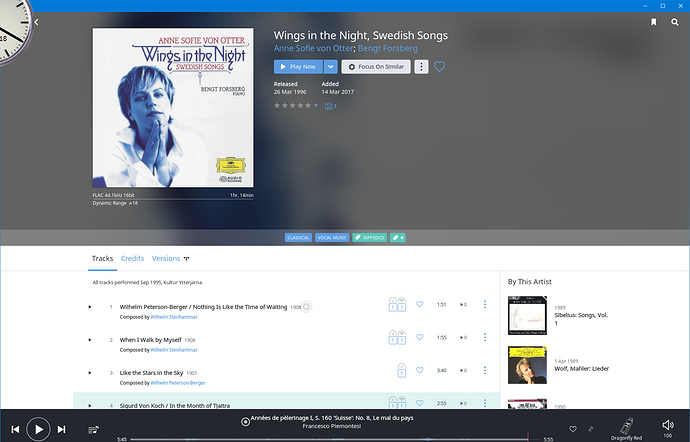 I don’t speak Swedish, so I couldn’t see it. But my wife speaks Swedish and she saw it straight away. The metadata roon is using is completely wrong. All the song titles (and their composers) are jumbled up. Just like a shuffled deck of cards. This is the correct running order of the album: 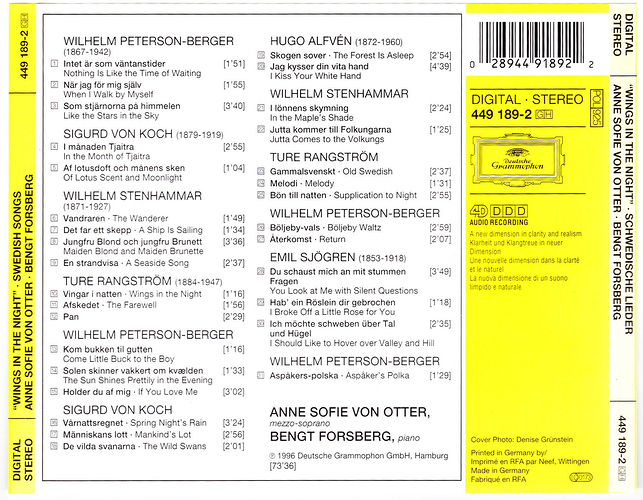 But there is no match at all with what roon is using: 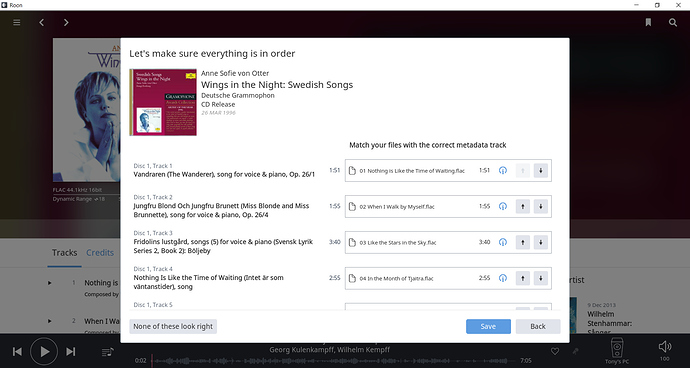 So what you are seeing is not just wrong composers but wrong song titles as well. The reason I see two composers is that I have the correct composers in my local library and roon is merging that with the wrong titles and the wrong composers. Looks like something that needs to be fixed in metadata. Maybe @joel can help. For the time being I have unidentified that album as I have the correct titles/composers hand edited in my local library. Unfortunately, my experience is that this sort of juxtaposition of song titles happens a lot in albums which are long complex non-English lists. Typically leider, opera, cantata albums. Difficult to spot if you are not a native language speaker.

I must say, that when I look closely I often find one or two juxtaposed songs/composers where there are long non-English lists. Typically those are Leider, Opera, Canatata albums. Most of the time I don’t look closely. I hadn’t seen this mess in 18 months for example.

@tripleCrotchet We know. Please give the support team in the US a chance to wake up. Thanks.

For me, in the Album screen, the English track titles match the back of the CD (exactly like yours, as far as I can tell), but the “Composed by” information for many tracks is messed up badly.

I just wanted to let you know that we believe we have found the issue here and are submitting a correction to TiVo. We will be sure to keep you updated on this.

I very recently found an identification for the album (see the first entry below). As I said, for me the English track titles match the back of the CD cover; not so, the composers. 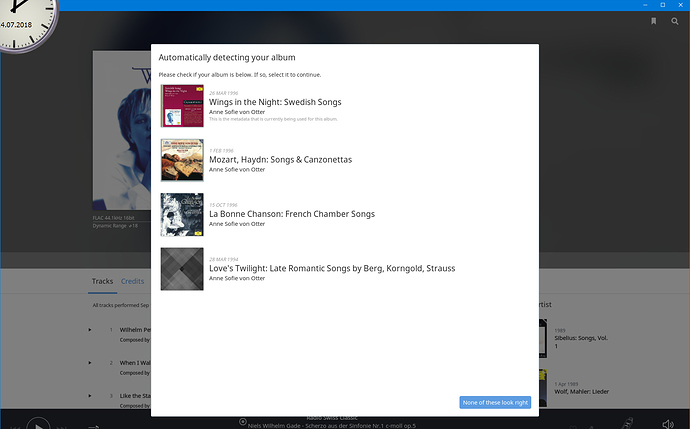 Stranger and stranger. Hopefully roon will be able to fix this. I can only get the correct track titles if I “prefer file”. Otherwise using the same identification as you it is a complete jumble. I double checked with my wife and also some youtube alternative performances in case all my track titles / numbers are messed up as well. But they look ok.

Our metadata provider has let us know that they have corrected this today. Please give this about a week to be reflected within Roon. Once you see the change on your end please mark this post as the solution.

In case anyone is continuing to have trouble with this. I had to move the album from my library, “clean up library” and then copy back the album and re-identify. Works now.