I’m a bit curious about the release plan ahead?
For me, there have been a lot of releases with low or no impact at all on my Roon setup. Of course i understand that one with issues are eager to get them solved, but the question remains a philosophical one; Do Roon need to lighten the support load by withdrawing support for devices, software versions and network configurations?
I am not even slightly interested in forced weekly patching with no apparent improvement to my purchased product. (I have Windows for that! Just kidding! They are less disruptive than Roon at this time)

Out of curiosity, does anyone know what the “Implementation of a new DNS lookup and caching mechanism” refers to in the rather scanty detail in the release notes? My charitable guess is that the DNS client package has been updated.

My less charitable guess is that Rock is now using external internet based DNS servers rather than whatever DNS resolution services you have put together for your home network.

If I get a moment, I’ll check my Pihole appliance and see if Rock is still using it for DNS lookups.

Out of curiosity, does anyone know what the “Implementation of a new DNS lookup and caching mechanism” refers to in the rather scanty detail in the release notes?

I don’t know what this change has involved.

Not a single instance of missing metadata so far since I implemented the new build yesterday evening.

If your configured dns server is too slow to respond, or names aren’t getting resolved to ip addresses, it falls back onto built in dns servers (like 1.1.1.1). That’s my guess anyways.

I just hope that they at least support canary addresses that you could use to signal Roon NOT to fallback on the built in one.

I just hope that they at least support canary addresses that you could use to signal Roon NOT to fallback on the built in one.

For the ignorant such as myself, would you explain?

Can anyone confirm that this track splitting bug was a recent regression, in other words a bug introduced by a fairly recent update? It’s happened to me a few times but only in the past couple of weeks.

For the ignorant such as myself, would you explain?

Sure thing. What I mean is that Roon could first use the DNS server it was assigned (e.g. via DHCP) to look up a special domain name (e.g. use-application-dns.net). If response comes back positive with an actual ip address, then Roon would be allowed to fallback to its internal DNS server. If the response comes back negative, then Roon must be obliged to respect the DNS server it was assigned.

This is a similar mechanism used by e.g. Mozilla Firefox to disable its built in DNS Over HTTPS support. Useful for example in corporate environments where system administrators insist on having all network go over their preferred (via DHCP or statically assigned) DNS server.

Glad that the DNS changes have cured some fellow users’ woes of various types. Just had a look at my Pihole logs and my Roon server has not made an internal DNS lookup recently.

Will have to reinstate my internal DNS redirection so that everything goes through Pihole and pesky devices like Roon and my Unifi kit cannot do their own hardcoded DNS requests to external DNS services.

I still don’t have the play from here in playlists.

Also there is a ridiculously large gap in volume between device volume and DSP now. My DSP volume is very quiet, even at 0db, wheras the device volume is quite loud, even at 0 volume.
This is a RoPieee feeding an Aiyima D03 via USB.

Similarly, I have another RoPieee feeding a Topping D90se, when I select device volume it says volume is fixed. The quiet DSP volume isn’t an issue on this as I have more than enough power to make it loud regardless.

All is well with Build 918 for my use case. That is Roon Nucleus, Dell XPS 15 (Windows 10), RPi4 running RoPieeeXL beta, Oppo 203, iPhone 11 Pro Max, iPad Mini 4, iPad 8th Generation, streaming from Tidal and Qobuz, no local files. I have also tested Roon core running on Dell with no issues.

In 4 years there has never been an update error. Today I can’t update the ROCK and neither client (Win32 and Win 64 bit) 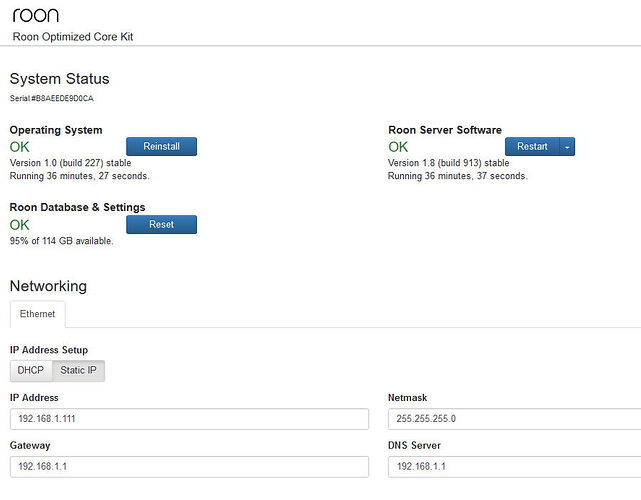 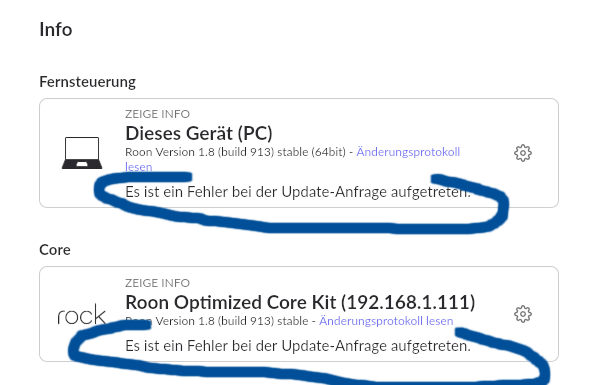 Updated iPad and iPhone but the as soon as I search for an artists the app crashes on both iOS devices, I’ve restarted my Roon core. Anyone else had this issue with iOS app crashing on the latest build.

same for me
i can’t update as rudiger, same message 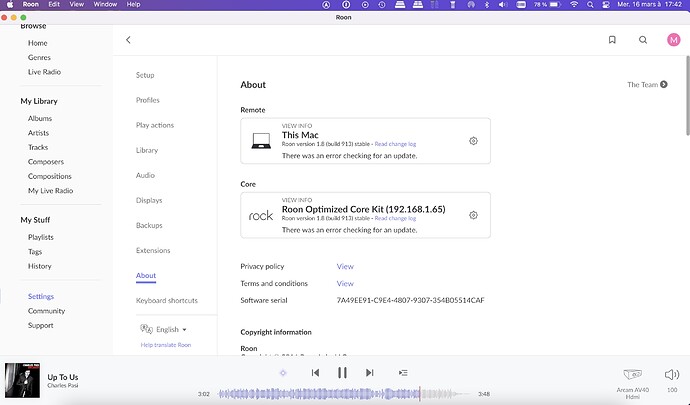 Solved, turns out Roon core did not auto update so I just re-downloaded Roon, reinstalled and now is all fine.

Solved, without having done anything the update was done automatically

I think this may the cause for your difficulty. Try again!

try again… we are in the process of moving to cloudflare for downloads and there may be a hiccup in service as the caches/proxies all line up.

Solved now, without having done anything.
All devices (Rock, Win32, Win64, Iphone,Android Phone & Tablet at build 918)

Okay, 918 is running…
However, I can’t say how much I dislike your ‘integration driven development’ with weekly updates.
Each week now, the hazzle again what will work and what other bugs have been newly introduced by this develop-fire-and-forget piece of software. I would be fine, if the stability would increase continuosly with each release, but this is surely not the case, as we can all see on the feedbacks here.
Based upon the complexity of the Roon software, it is just impossible to release a new version each week, because proper testing and verifying all of its current and added features would take much longer than a couple of days. So, quality will suck on such a short relase frame.
But hey, who cares, if the paying customers (AKA involuntarily end-testers) are running in an issue, we can fix it next week…
I’m a software architect working for more than 30 years in the automotive software development on products with highest safety integrity level, e.g. brakes, steering or airbags. So, i think i know what effort is required to deliver a thoroughly tested software, if quality, stability and reliability is an issue. Even a monthly roll-out is challenging, especially if several new features are added with each release.

If this newly introduced weekly update craziness is the new standard from now on, I’m pretty sure, that I will not follow this bumpy road with you.

This comes down to testing more than anything. TDD would solve most of these issues, the problem is usually caused by either no tests, or tests written after development is complete. When adding tests after writing the code, people have a tendency to write their tests around what the code currently does, not what it should do.