When I select a specific genre to play and chose either play or shuffle, Roon plays mostly the selected genre but will also play tracks from other genres. It’s like when selecting “Folk” it plays 3 Folk songs then plays a Pop or Rock song and back to Folk again.

I even tried selecting all tracks and then using the focus feature to play only a specific genre but the behavior is the same. The only workaround is to use Foobar2000 to group all tracks from a specific genre into a playlist and play that list in Roon.

Is this a bug or is it the Radio feature, if so, how do I turn the radio feature off?

FAQ: What's Radio and how does it work?

What is Roon Radio? Designed from the ground up with machine learning technology, Roon Radio can play a mix of your favorites along with music from beyond your library, using the vast catalog of music from TIDAL and Qobuz. Roon Radio makes ...

Remember that every Zone that you may have set up will have its own queue - so if you don’t want to use Roon Radio, you will need to turn it off for each Zone.

OK, I’ve cleared the entire queue, made sure the radio is turned off, selected one genre, and hit play now. This works ok. But, if I repeated the above, but after selecting a genre, I hit shuffle instead of play, it will play mostly the selected genre, but will still play other genres. Is this normal? How do I shuffle all songs from s specific genre?

I even tried selecting all tracks and then using the focus feature to play only a specific genre but the behavior is the same. The only workaround is to use Foobar2000 to group all tracks from a specific genre into a playlist and play that list in Roon.

These are the sort of sub-genres you may get 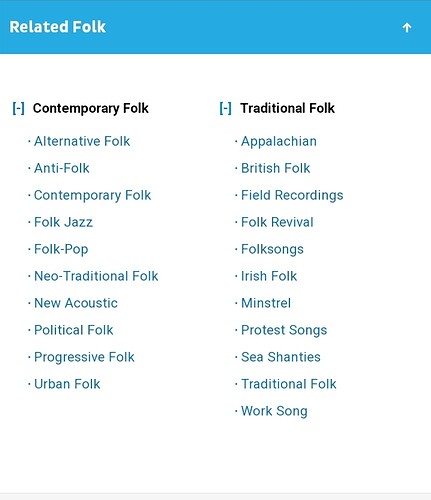 OK, even after selecting a specific genre, and pressing play now, after a while, it will start playing other genres. For example, I selected to play only ROCK, and it played some tracks that both their track nd album genres are defined as Blues (I double checked by clicking on track info then tags).

My tags were edited using Foobar2000, which sets genere for both track and album (there is only one genre tag setting). This never happens when I play the same library using BlueOS or Foobar2000. Only Roon get genres mixed for an unknown reason. At first, for about 30 minutes, it did play only the selected genre, but then it started random playback despite the fact there are many more tracks from the selected genre which were never played.

What else could cause such erratic behavior? I will now repeat the test but this time using my Denon AVR as an endpoint instead of the BlueOS devices (C658 or Node). Perhaps it’s another Bluesound bug?

Unless you changed Roon’s import settings, Roon doesn’t care about the genre settings in your files.

I double checked by clicking on track info then tags

This is somewhat pointless as I already pointed out that Roon only knows about album genres. Please open the album that the track belongs to in Roon and look up the accumulated genre tags there. If one of them classifies as Rock or a sub-genre there of, then it is rightfully part of the playlist.

Note: If I open a genre in Roon and use the small triangle to choose to add the content to the queue, it’s easy to see for me, that no other content than the albums already be shown in the genre are added to the queue. I have to admit though that I don’t use streaming services – they may complicate/change results for people who use them (content outside of your library doesn’t necessarily follow your genre rules/use default genres instead) – hence the hint to check on the album an offending song originates from.

OK, you maybe on to something. The mixup only occurs in non Roon generated genres. For example, I have a genre called “World” but Roon retaged some of the tracks as international instead.

These genres are the original genres that came with the files. The FLAC files were downloaded online from Deezer servers using a 3rd party app available on github (Deemix). The app doesn’t modify the metadata, it retains what was there on the server.

Foobar2000 simply reads whatever is written in the genre tag. It can be any word. I’m currently trying to rescan the library in Roon after changing genre settings to file instead of Roon online.