Is it possible to see how much pressure your ROCK is on.
I have successfully installed ROCK on an older ThinkCentre M92P, I5 dual 2.9 mhz and 8 GB ram and older HDD.

Considering upgrading to an SSD later, but interested in seeing how much the machine is working as it is at the moment.

ROCK is a closed appliance. It has no option for running self-diagnostics, nor providing the monitoring of hardware while running. This has been requested for awhile and you can find threads in the Feature Suggestions that include, memory utilization, CPU Temp monitoring, SMART hard drive monitoring, Memory and Hard Drive diagnostics, to name a few.

It is one of the reasons, I still prefer to use Windows to run RoonServer.

I’m impressed by how good a relatively old computer runs with this ROCK installation.

The user interface is snappy, and no audio dropouts.

I’m not playing to many endpoints, or do heavy DSP.

The only bug I’m experiencing is that sometimes the last 2-3 seconds of a song cuts off and the next track starts.
Playing from Tidal to Sonos device.

I’m going to test more later, with other devices.

That symptom usually indicates a network rather than a server issue.

You can get hints on performance figures by observing “Processing speed” in Signal path-view. Thats about the only way to see if it’s struggling in any way. (unless the experience in whole is flawed of course)

The solution is to reboot the ROCK, then the problem disappear.
Found this “solution" in a another post about a ROCK user had the exact same behavior.

And I can play music for hours with no cuts, and then when the bug reappears every track cuts at the same place, strange…

There are no dropouts mid track, every time it is the last couple of seconds that cuts off, if it was the network shouldn’t the cuts be more random?

When I had some DSP enabled on one zone, the processing speed hit around 55, as I understand as long as I don’t hit 1 or under its “fine”.

But when my Core was on my Laptop or MacBook I have never been under 90.

I ran regular on an old nuc running ROCK at 1.3x processing speed Upsampling everything to dsd512.

So it sounds like you have plenty of horsepower to spare right now.
Enjoy your music.

Can I suggest you try turning cross fade and volume leveling off on one endpoint and try that (that is if you have them turned on)
I had this issue with a previous lower powered Nuc and after turning it off everything was perfect.

No matter what I do, the only cure for the problem is a reboot of the ROCK, and after a reboot everything is peachy again for a while.

Running without any auto volume level or DSP, don’t remove the problem.

Sorry Jesper it worked for me, so worth a go.
It was pushing my server over the edge as it could not cope with that point where it merged the two songs for Crossfade purposes, and with DSP added almost 50% of the songs skipped.
It was almost perfect after that 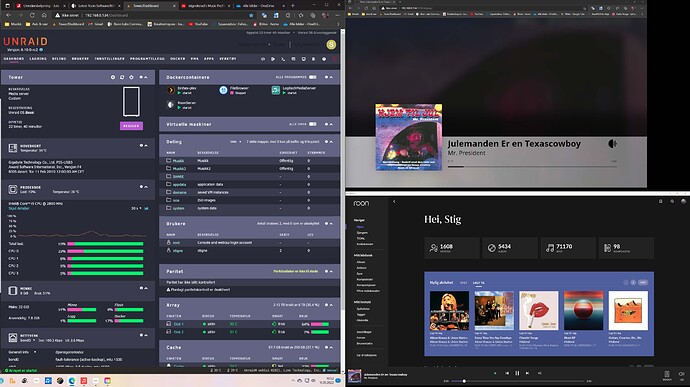 I gave up on my ROCK(MOCK), and installed the Windows 7 Pro it was born with again.

A another advantage of this setup is Githubs Airconnect can run simultaneously, and give me Airplay on my old Sonos devices.

Time will tell if the old boy is up to the challenge.