Hi fellow Roonmates.
Sometimes I like to view deluxe sets/box sets as separate discs. Mainly when the artwork for the separate discs merits this. To do this I name the album titles differently (Disc 1 Disc 2 etc). This usially convinces most players to treat them as separate albums. Roon seems to override this. Example shown here is the Bee Gees Odessa, how it’s viewed in JRiver and in Roon. I’ve had a tinker to try to split them but to no avail.
Advice appreciated. 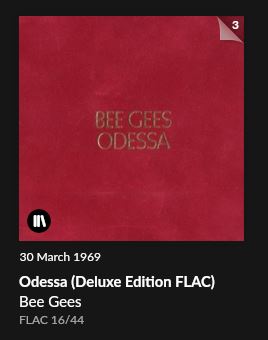 I recently bought the 10 cd Neil Young archives and ran into the same problem. So, I employed all 3 tricks:

Now I get a drop down box in Roon to select the album number, but the artwork is the same for all albums, despite the embedded artwork being different. Still not ideal, but I hope this helps somewhat. 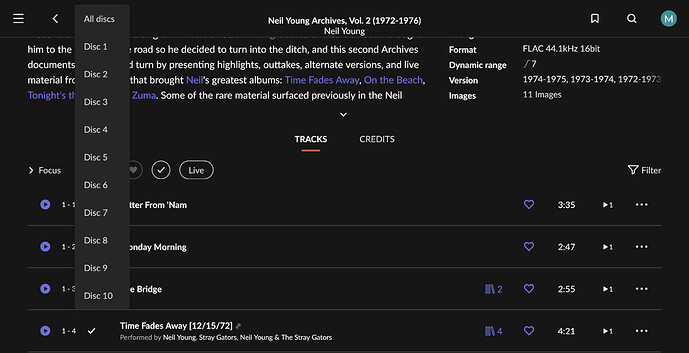 Thanks for the comments Mike.
I already had the drop down box etc. And each album was in its own folder. Your comments did get me thinking though. By using Disc 1 etc in the album title, and disc number, I was inviting Roon to treat the albums as a set. And I managed to sort it:

The easiest way is to make a folder for the Box , the a sub folder for each disc.

If you leave the sub folders “bare” CD01, CD02 Roon will group them and ID the box.

If you name the sub folder “CD01 - Some long name” etc , Roon will treat each sub folder as a separate album . The auto ID will fail as the split CD is not a release.

You can also set the ROONALBUMTAG = Box Name , Roon will create a Tag containing the Box

Thanks for the input Mike O. There’s clearly a few ways to skin this cat. Only the Sketches album remained unidentified. Which is OK. Still trying to work out why that one has ‘The Bee Gees’ also attached to it.