When using an iPod Touch or iPad as a Roon Endpoint, with an Apple Lightning to USB 3 Camera Adapter to enable output of audio data over USB to a Chord Qutest DAC (with or without a Topping D10 in-between as a USB to Toslink converter), I’ve found that the iPod/iPad volume buttons can change the volume coming from the integrated amplifier that the Qutest is providing its RCA outputs to. The iPod or iPad are always set to Fixed Volume in the Roon Device Setup and DSP is turned off, so I don’t understand this behaviour.

I think that the ability to change the volume using the volume buttons implies that either Roon or IOS is processing the PCM data output, but I would prefer that the iPod/iPad not process the data sent to the DAC over USB, i.e., I cannot be sure that that PCM data is not being processed even if I have the iPod/iPad set to maximum volume.

I am aware that IOS has a Guided Access feature that can be used to lock out the Volume Buttons, but use of this feature does not imply to me that Roon or IOS software will no longer be processing the PCM data to control volume.

Have I got it wrong here? Is there something I’m missing?

I don’t get that behavior. (And I agree you don’t want that.)
I have a Lightning in-line DAC/amp for some Audeze headphones, they work like that, but when I connect the Chord Hugo 2 with a USB adapter like you do, I don’t get that behavior.
If you play high res, does the Roon signal path show sample rate conversion to 48k? That would show that the signal goes through the iOS.

So it shouldn’t do that but I can’t tell you how to fix it.

Thank you for the feedback and suggestion.

The signal path doesn’t show any sample rate conversion to 48k, with the iPod volume not set to maximum or less. I recall that IOS downsamples to 48K for use with the internal DAC, which is not being used since the output is USB. Does this also mean that signal is not going through IOS at all, and that the behaviour is from Roon? 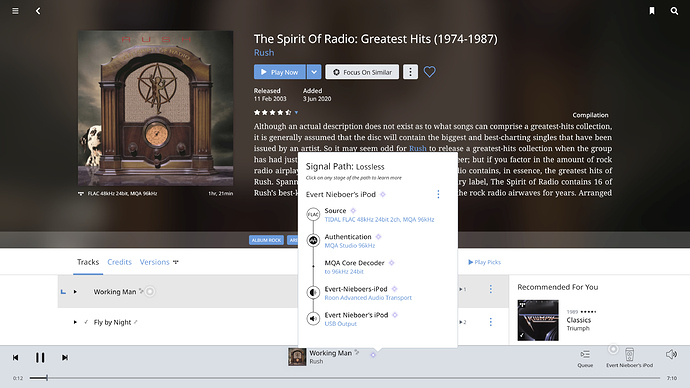 That’s working as it should. It won’t show the DAC as it doesnt on iOs for some reason.

Good, but that leaves open the question, why do the iPad volume control buttons work?
People have requested that for a long time, maybe they implemented it and I didn’t notice.
Anybody know?
(I would check but I no longer do that, would have to rummage for a cable…)

Well, I thought I had tested the iPod/iPad Volume buttons with USB output directly into the Chord Qutest (bypassing the Topping D10 as a USB to Toslink converter), but it seems I hadn’t !

After just trying that configuration just now I get the same results as with your Hugo 2; volume buttons are inactive. Sorry about the confusion, but I guess I lost track of all the configurations I’ve tested, since this problem goes back maybe 1 1/2 years for me, when I first noticed the problem when using a Topping D30 as a DAC.

So for some reason Roon allows the use of volume buttons on IOS devices, for some USB DACs (Chord Qutest and Hugo 2), but not others (Topping D10 and D30). Perhaps that form of volume control is a useful feature when using a portable DAC that does not have volume controls, but I would definitely prefer the ability to disable this feature since scaling the PCM digital data as a way of volume control is not preferable with my set-up.