I use 3 ropieee pi´s this HAT´s from hifiberry.
Since the update to the newest ropieee version one of my berries put the volume back to zero by itself after every try to put the volume to any level…
This is a pie with the DAC2 HD HAT from hifiberry. The settings are the same on all my pie´s.

Has anyone an idea why this happens?

Thanks for a hint!
Andreas 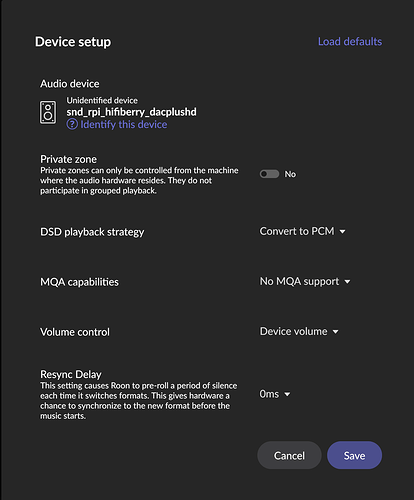 Yes, unfortunately this is an issue with that DAC in combination with the latest stable Linux kernel.
As long as Hifiberry does not fix this there’s nothing I can do. I’m monitoring this, but so far no progress whatsoever.

FWIW I also had this issue.

I loaded Hi Fi Berry’s software onto a spare SD card - and used that for a couple of weeks.

Thanks!
So I will go for hifi berrys software until this has been fixed!

This issue is just happening on the hifiberry DAC2 HD

No. There is a driver involved, which is part of the Linux kernel. And they need to maintain it.

I don’t know. They will probably run into this when they release their own distro with the updated kernel.

For now it doesn’t make sense (at least for me) to contact them: they’ve shown on multiple occasions that they don’t care about support for other OS’ses then their own.

…yes, thats my experience too - they seem not to take care of other OS´ses.

Which HAT would you recommend - in terms of supporting ropieee?
I would need one more HAT (with amp! direct speaker output)

I just installed the latest hifiberry os - resulting in the same issue.
So I wrote to the hifiberry support… I hope they will update their software soon… no musik in my kitchen! Cooking without music is not acceptable

I will report here if I got an answer from hifiberry.

I got answer from hifiberry…
well. The answer was, that they dont support hifiberryOS via the support plattform, just through their community.
So I went over to their communitiy…
There i found a thread already describing this issue - and the answer from the hifiberry team: If you think this is a bug you can open a tread at…

I’ll keep a close look, but in the meantime I suggest you pick another HAT.

At some point I’ll update to the latest Hi Fi Berry OS as you did (I have a spare SD card) - and if I can reproduce it I’ll raise on github as he’s suggested. I have an account so it’s not too hard…