VST plugin compliance in part or in full, at least v2.4

I have seen this feature discussed before, but as it presently is not seen in the feature request list, I want to suggest that VST compliance will cause a flooding of new features. It is almost like putting water in the pool; much more fun to swim then.

There are many super high quality VST plugins that I use in Reaper and elsewhere, and what a great day it would be if Roon was to offer VST compliance.

An alternative to VST plugin compliance is to do audiorouting on the outside of the Roon context so as to integrate a VST feature (or other DSP). However, this is not the good way. It is often mediocre from a High Fidelity perspective. In addition, it most often means disabling the fantastic zone feature of Roon. That’s a bummer, but if the VST plugin is sufficiently important, that is what I do.

I’ve solved this by outputting sound from Roon to JRiver in order to run my VST’s; (Waves NX, Sonarworks Ref3, DMG Audio EQuick).
This allows me to use the brilliant interface of Roon, as well as the DSP’s needed.
It’s not ideal, but seems to work well.
I’ve yet to A/B vs JRiver only.

So - another wishful voice for VST implementation.

Relevant info, but not too uplifting.
In any case, my workaround works quite well for now.

That’s a decent solution, but the more nodes (roon, JR,…) present in the routing of the audio stream, the more likely it is that the quality goes down.

The major additional con of this solution is that you miss out on the zone features or Roon. If I understand your setup correctly.

I can’t see why quality would go down, please elaborate on this?

I’m running this setup at quite the low latency without any dropouts - and now also with the ASIO driver; which allows me to use the Lynx native ASIO driver. Although I can’t hear any difference from WASAPI, it feels good

I’ve A/B’ed and without claiming to have done this scientifically correct, I can’t hear a difference at all

The only zone I need this setup for is for headphone listening in which I want to use Sonarworks for headphone calibration and Waves NX to simulate speaker positioning, along with a couple of other things…

But I still agree, I’d like to avoid doing this.

As long as you avoid jitter or more severly; breakdown of the stream, as you CAN experience with e.g. the Asio4All driver, everything is ok and the audible difference perhaps non-existing. I agree.

BTW, if there is a need to inject one VST plugin only, then you can use e.g. this minhost instead of Jriver. I have used it alot. (In a non-free version that can perhaps still be found somewhere). Here is a link I found now:

Well, turns out that this solution unfortunately is a bit flakey. I’m getting stutters from 88.2 / 176 khz FLAC and I can’t seem to solve them with buffer adjustments. When analyzing the audio chain in JRiver it seems like it’s trying to channel map from the source 2-ch to 16-ch. I’ve tried to adjust settings in Jriver and Roon but it doesn’t seem to work.

I’ve also had a couple of BSOD’s sourced from JRiverWDMDriver.sys. I can’t seem to replicate these errors thus having to sort them in the infrequent yet terribly annoying group…

All in all I’m back to square one. That is using JRiver as my primary playback software. Although I’m happy that Roon has provided a DSP function, crossfeed is not even remotely close to sufficient for my personal needs. I do not resort to a set of VST’s because I want to. I do it because it has proved to yield the best headphone experience for me, and others using similar setups (Sonarworks, Waves NX etc).

In terms of metadata and now also artwork, Roon is the king of the hill. The seamless integration of Tidal also works very well. But first and foremost I listen to music. I’ll keep close track to what @brian et al is doing, but for now - I’m out.

Told you there would be trouble

If you would still prefer to use Roon, then there is the option to send from Roon to a virtual soundcard via e.g. wasapi. Set the soundcard as default for playback in Windows controlPanel/playback. Then you can use the mentioned minihost or whatever vst host, then using e.g. asio4all driver to collect windows default as input, add your vst plugin, and send to whatever output. This is an easy setup that will be stable and rock solid and will solve your needs.

I sell virtual soundcards on soundpimp.com and you can find others as well. (Soundpimp is “headphones on speakers”). Send me an email if you want more info.

VST plugin feature would be absolutely super to have in Roon to get rid of all this trivial and non-optimal setups. The huge snag in the suggested setup is the disabling of the Roon zone system, which means you can actually use Tidal directly unless you need the meta feeds that Tidal/Roon provides for your local music.

Here is Minihost with asio4all and a hrtf plugin. Easy! 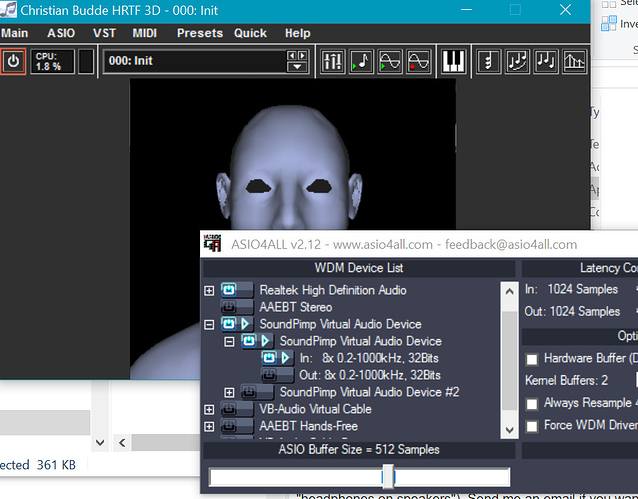 I was kind of surprised that Roon decided to implement it’s own DSP engine. @brian had mentioned at one time that VST and AU support might work in roonbridge on windows and macOS. Sounded like a great solution that would keep the ugliness of VST/AU configuration screens out of Roon.

Agree, but that uglyness is varying and I suggest a minor annoyance only, in particular since this is how the context of VST plugins works. We are used to it. It should not stop VST implementation if that is or (hope not) was in pipeline. It is also possible for Roon to offer the standard VST gui only, or a customised Roon variant. Not important.

Agree, but that uglyness is varying and I suggest a minor annoyance only, in particular since this is how the context of VST plugins works. We are used to it. It should not stop VST implementation if that is or (hope not) was in pipeline. It is also possible for Roon to offer the standard VST gui only, or a customised Roon variant. Not important.

It went against their user interface design standards and simply wasn’t going to happen in Roon itself. Putting it in Roonbridge would isolate it someplace where it wouldn’t matter as much.

Use e.g. Reaper as VST host. If the plugins are of good quality, you will experience no problems.

I must be Norwegian blunt and state that I find this to be pedantry conquering real-life user needs. Those unaware of VST option would never use it, not be annoyed by it, while those accustomed to the GRAND benefits of VST plugin system are completely - yes - accustomed to what VST offers, including all those fancy GUIs. IOW, disagree!

Can the API interface in Roon be used in a way to accomplish something equal ?

Just tried this old program with some new Fabfilter VST’s and Minihost would not recognize them. So back to using JR (ugh) for this solution.

Implementation or usage of VST within RoonBridge seems like a great solution for Roon. But that final decision is up to Roon.

se e.g. Reaper as VST host. If the plugins are of good quality, you will experience no problems.

Reaper is a GREAT suggestion for using VST’s and Roon.

I have a Client/Server setup for Roon. Win10 for Core and Server 2016 for RoonBridge to Mutec to DAC

I had been trying out JR 23/64bit with a (FabFilter) VST and this setup worked as others have described.

After reading @Carl_Henrik_Janson talking about Reaper, I thought I would give the program a try. This program offers ASIO functionality with the ability to use VST’s.

If you never worked with a program like Reaper (Digital Audio Application with recording, editing, processing, mixing and mastering toolsets) it can be a little daunting, but their documentation and videos help out greatly. NOTE: During install In Optional Functionality make sure you install ReaRoute for your ASIO support!!!

Reaper works in my setup (works great!!!) running on the computer where RoonBridge resides and uses less resources compared to JR.

Update on Reaper - So far is it working well with the VST I am using playing PCM only - No DSD.

The only issue is Reaper will only work with a dedicated Sample rate being sent to it (configure Roon to send this sample rate), where with JR song sample rate can change. This sample rate is in the Reaper Project setup. Then when looking in Roon (Device Setup), the rate in the Project is the ONLY supported sample rate displayed in Roon.

So far it is as stable as JR was - some issue which just require closing the current Project and re-open it - but these same issues occurred with JR. Reaper uses less CPU resources too…