Wave is all I want to play

Hello.
I am new to roon.
Was a JPlay and JRiver user for 7 years.
I want to play only wave and dsd from my roon core.
How do I only play these ??
Priority for playback needs to be set as under :
DSD
WAVE
AIFF
rest…
Kindly advise.
I want to set this 1 time and not have to do it again and again.
PERMANENT.
Thanks.
MBJ

Just add the Watch folders with just these file types either combined or separate folder.

Example 1 watch folder would be DSD, then a 2nd folder WAV, then the 3rd AIFF or you just put all of these together and Roon will sort them out.

And then you can create Smart Playlist like @Cheung_Hon_Wah has mentioned above.

I don’t understand the question. If you only have WAV and DSD files than that’s all you can play. Roon will just pick up what’s in your folders. Am I missing something?

Sir, I have 12tb of music in different formats. Earlier I used to use EAC and rip in FLAC. Later I shifted to dB Power Amp and started to rip in Wave. So I have the same song in different versions
Now, I can delete all the flac I have, but am scared of loosing music. So I want to set a process in Roon, only play music in this order…
1st Preference DSD
2nd Preference WAVE
3rd Preference

So if I choose a song, it exists in several formats, Roon should choose and play in the order of my preference…

This KB article sets out how Roon treats different versions of an album. Roon will default to the highest quality version as Primary, but you can change that in the Versions tab. Roon will play the Primary version unless some other version is selected to Play.

So if I choose a song, it exists in several formats, Roon should choose and play in the order of my preference…

No, you ought to maintain your library by deleting unwanted copies…

Or rather, Point your watched folders on to what you want to play, not the copies.

What dictates a Primary Version of a song?

Is it the bit rate? Is it the order that it was added to Roon? Or is it the type of file that it is?

Just curious how this is determined.

If you look you will see Roon picks the highest frequency or MQA.

This is how Van Morrison’s Moondance is handles for me. 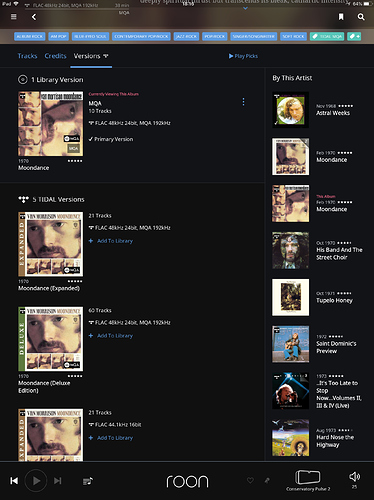 You can chose your primary version

What this shows me is that Roon picked your 1 and only local copy first and then show multiple Tidal copies next. I believe (not for sure but) that you local copy will always automatically be the Primary unless you change it to Tidal.

Now the Tidal copies are laid out in the order of highest res first.

Below is my local copy lineup. 2 Local and 1 Tidal. The FLAC is the Primary and then the DSD is second.
Again the Tidal listing will always show up last and in the order of Res with the highest being first.

For me the local FLAC version was added to my library first and was automatically tagged as Primary at that time. For me all of the files that were added first became the Primary.

Is this how you establish Primary for any library - adding these listing first?

Now if when adding the WAV files and if their are any files that were different songs or albums from the DSDs, then these WAV files would become the Primary.

Just wondering if there was some kind of logic to this that could be applied if wanted. 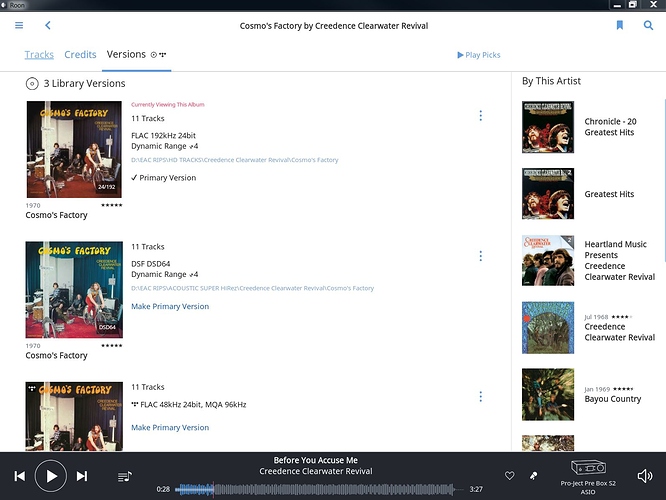 My screenshot was only a quick example, you can choose your primary version and all others are still available to you.

No, Primary is not defined by which is added first.
Roon picks the highest resolution version, and if there is a tie, it picks local over Tidal.
MQA is ranked by its source resolution, so a 24/96 MQA file is Primary over a 16/44 file.
Note that this is true even if the MQA is Tidal and the CD rip is local.

But also note that this is for Tidal albums that you have explicitly added to you library.
In the Versions list, the albums you have in your library are listed first (both local and Tidal) on a white background, one of those is Primary. Then the others in Tidal, those you have not added to the library, are listed on a black background.

And if you add a higher resolution album later, it becomes primary.