We want your ideas for Playlists!

A great start would be to pull and display the description of Tidal playlists!

I use setlists to prepare for concerts. So when I buy a ticket months before the concert I build a playlist after consulting setlist.fm to see what the artist have been playing live recently.
E.g. Bruce is comming to town. Then I go to: http://www.setlist.fm/stats/bruce-springsteen-2bd6dcce.html?year=2016
and build a playlist with his top tracks for 2016. It usually takes a long time to find all the tracks from different CDs in my collection or on Tidal but if Roon could somehow make a smatlist from the setlist.fm dataset I would be a very happy camper:)

If it isn’t already, make the playlist itself searchable. I often want to know whether a given track is already on my playlist. Also, allow sorting by Date Added.

I’m getting used to Roon’s ‘volatile’ queue so I’ve started to make temporary playlists of music, podcasts, etc. that I want to listen to.

A “Play From Here” command would be nice to have in the playlist. Saves a few selection keystrokes when starting from the middle of a list. That is, if an automatic track “Played To Here” marker couldn’t be placed by Roon that shows where a album/playlist stopped playing.

The title/background/pattern for the Album Tracks or Queue or Playlist or History screens should be different enough from each other that the user who returns to a Roon screen from doing something else won’t mistake one for the other.

It would also be nice if the history showed which remote played which song. Makes it easier to select tracks from history from a particular machine whose operator/DJ had exceptionally good taste.

Also, when the user is playing tracks from a playlist but ventures off into browsing Roon’s rich metadata, there should be some kind of Playlist Title indicated on the transport and/or the top of the screen. The Playlist should be identified in the queue. It’s easy to wander away from the path you were on and this gives us some breadcrumbs to find our way back.

It might be that some of these features are already available in Roon. If so comrades, please advise.

And yes, I realize that this thread subject is for playlist ideas. But I’m in brainstorm mode.

Playlist to inform user if a duplicate entry is being made

Related to playlists I WAS using iTunes for while and I’m used to a more compressed playlist style. Here are my requests:

Wow, awesome feedback! I’m going to use you guys for ideas more often!

Clearly smart playlists are a big request from you guys. Right now you can get a lot of the same functionality using focus and bookmarks. For example, you could create a focus for “Jazz” + “25 Most Played” and create a bookmark called “Most Played Jazz”. This functionality isn’t really communicated very well and having smart playlists would help make this more of a real feature.

I’ll keep updating this thread with our progress on playlists as we go.

@brian2 is there a way to focus on music “never played”?

I think that it would be great for Roon’s users to be able to share Tidal playlists.

I think that it would be great for Roon’s users to be able to share Tidal playlists.

Just to clarify, you mean all Roon users, right? Like a community thing. Because Tidal playlists are global playlists, which per definition are shared among every user on your Roon server.

Just to clarify, you mean all Roon users, right? Like a community thing.

Yes - thanks. Assuming I understand your question, I think it would be great to be able to share playlists - if entirely composed of Tidal tracks - with members of the Roon community. I know that can open up a can of worms to implement. But even if I could just save a playlist of Tidal tracks as a file on my PC (Mac or whatever), and then share that file with Roon/Tidal users here - or even other forums - that would be awesome IMO.

AND I think it would contribute to more Tidal users buying Roon, and more Roon users subscribing to Tidal. And we ALL benefit.

@brian2 is there a way to focus on music “never played”?

Good call. In a few short months, “played in the last year” will no longer be sufficient

I’ll get this done.

I’ve already PM’d @palbratelund to suggest that TIDAL could provide weekly geo-specific chart playlists. For instance, the UK Top 40 Singles Chart (which would be a destination playlist for me). Or is this something that Roon could even attempt?

Bear in mind that a lot of these lists and their constellations actually are intellectual property owned by publications or aggregating bodies. To use them, someone has to pay

But I do suggest a Roon Top100. So that everyone using Roon can see a Top100 list of what other people are listening to!

But I do suggest a Roon Top100. So that everyone using Roon can see a Top100 list of what other people are listening to!

If that could be divided into genres it would be great fun. Sort of like a LastFM group (when they had groups). I could see it being one of those good ideas that you have to say no to in order to focus though.

If that could be divided into genres it would be great fun.

I think genres are a must for me for it to be properly useful rather than just used once or twice out of interest… Often I find anything that has a ‘top’ type feature without being genre specific is pretty pointless since it will inevitably include a lot of music of the genres that I don’t like or listen to. Discovering things out of my ‘comfort zone’ really has to be an active search IMO, simply having lists full of it generally makes me tune out… 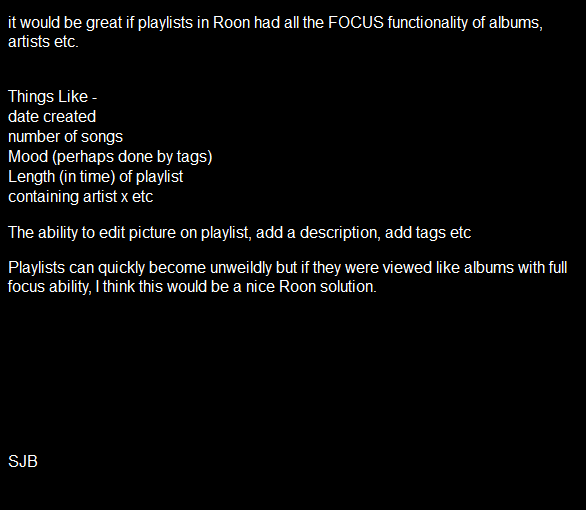