We want your ideas for Playlists!

Playlists are a notorious weak spot for us. None of us at Roon Labs are big playlist users so we’re looking to you guys for ideas on how to nail this. So I’d like to know how you use, think about, and create playlists.

Do you want additional customization (images, descriptions, ect) of playlists? How do you want to browse your playlists? Do you want different ways to add music to playlists (smart playlists, filters)?

Here’s a mockup of a work-in-progress playlists design. Disclaimer: all of this is subject to change and may not ever be released 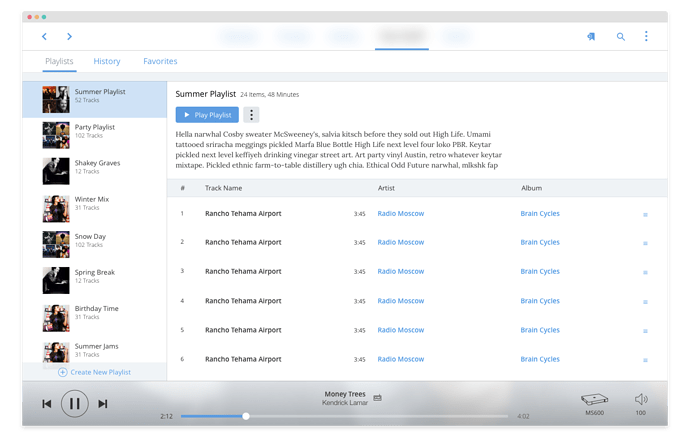 playlists.png1540×1000 272 KB
6 Likes
You and Roon: Monogamy or Polygamy?
ROON PLAYLISTS - functionalities must evolve!
Creating "smart" Focus
When can I sort playlists?
Some issues with Roon App and Roon on MacOS
Tidal integration - Adding (to Roon) and liking a song
"Singles" Approach to Interface Development
Odd playlist to queue behaviour
Artwork for playlists
How to choose a song in queue and play queue from here?
Hi I'm Michael, new Product Manager. Let's Chat!
Random Pull From Large Focus
Apple, Spotify, Tidal: What news from the front?
Roon playlist features are poor!
Solve the library/non-library conundrum and all the complexities it creates for tagging, focus, playlists etc
Roon 1.8 arrives on February 9th
Does Roon care about non-streamers anymore?
hifi_swlon (Steve) February 29, 2016, 6:06pm #4

As a starter - my first reaction is I’d like to see some sort of track/album artwork icons in the list.

I’m not much of a playlist user as I tend to listen to albums rather than tracks. There are, however, times when a playlist can be handy e.g. when having people over for a social occasion…but then my inclination is to turn to Roon’s Radio capability to generate a perpetuals smart playlist…and it’s there that I’d like to see some ability to influence what Radio does or does not play. I’ve made suggestions in this regard previously: https://community.roonlabs.com/t/radio-thumbs-up-down-question/226/7?u=evand

Big fan of smart playlists, like J River currently offers. Would like as much flexibility as possible – to use any field I have metadata on.

Since I listen to mostly classical music, I would like to be able to sort my playlist by either album or composition.

Saving tracks out of history to a playlist is doable now in Roon. At least in the Mac OSX app I run.

Thx, hadn’t explored that yet, good to know as I sometimes have friends over each armed with a tablet to add to a playlist. Some pretty good stuff usually comes out of that.

I don’t use Tidal. But, If I did, I think that it would be great for Roon’s users to be able to share Tidal playlists.

Necro Edit: I do have Tidal now and Qobuz. I, imho, still think it would be great to share playlists between users of those 2 programs.

It would be great if Smart Playlists worked hand in hand with Focus. Currently you can filter by Focus and then have to save a Bookmark. An option to save a playlist based on Focus results.

one feature of iTunes’ smart playlists i always loved was the ability to include playcount. i could create a playlist of “all my jazz:vocal” with a playcount of < 3 (for instance). it updates in real time of course, so eventually i’d have to reset the number. i found this to be a great way to find music i already owned, but rarely played.

Don’t use playlists much, but I have found one practical annoyance with the way they are done in JRiver or iTunes. The track is identified through a physical path on a storage device. So if I want to use JRiver to manage playlists, and then copy it to an SD card for use in my car, or a portable device, I have to edit all the paths to the other storage structure. Huge pain in the behind, part of the reason I don’t use it much.

(Maybe iTunes solves this for iOS devices, don’t know, but neither my car or my portable is iOS.)

They can do that!

Big fan of that translucency and the overall more native-feeling UI.

In the spotify app I definitely find playlist folders are great for keeping them organised.

For instance, I create a folder for the year and within that I have subfolders for each month in which I place my favourite tracks of that month.

I started this in 2012 and everything is nicely organised this way.

I know Tidal doesn’t support the folder feature which makes the playlist tab very messy once they start racking up.

I know Tidal doesn’t support the folder feature which makes the playlist tab very messy once they start racking up.

iTunes does, though, so folders would be very welcome in Roon. Messy is an accurate description.

I’ll add this suggestion, too:
Please make it possible to easily select a bunch of files and then drag and drop them onto the plus sign to create a playlist, or drop them on an existing one.

iTunes and Spotify both work like Finder in this regard (while Tidal doesn’t), and it greatly speeds up playlist creation and editing.

Can this not be done already

It would be great if Smart Playlists worked hand in hand with Focus. Currently you can filter by Focus and then have to save a Bookmark. An option to save a playlist based on Focus results.

I often use playlists as a means to surface and discover music, for example tracks that I haven’t heard for a couple of years. I’d like to see descriptions for the playlist, better imagery to represent the contents (A mosaic of some of the album covers), smart playlists for the use case above.

If I’m playing a playlist, it would be good to identify it in the queue, so I can see where it begins and ends, and where I’ve inserted other items in to the queue.

Finally,it would be great if Roon could intelligently use the metadata to suggest similar tracks to those in the playlist being created, recognising themes etc.

First of all, playlists are a great feature and IMHO should remain one of the items on the main menu. Playlists are collections of tracks put together by the user (i.e. which don’t appear together on an album or compilation etc). This is why I had asked in another thread if Roon could remember the “show global playlists” option, as I keep having to turn this off to stop Roon from showing all my albums as playlists.

I use playlists in what I think is the conventional manner - to group together tracks which have something in common. I may or may not play the whole playlist through.

Personally, I currently use playlists for 2 things;

How I create them? I just click the “add to a playlist” button, and then select the playlist that I want to add the track to.

In another thread I had already requested the option to be able to assign images to playlists - this would be a great feature to further personalise them, and for quick finding. As @thompo mentioned above, the option to use a “mosaic” of the albums covers in that playlist for the overall image is a good idea too.

Smart playlists would maybe be a good idea - you could have one for the top 100 played tracks, for example. But I assume that these things can be achieved through the focus feature.

Another current issue; on the playlists screen, there is a drop-down box in the top right - but it only has one option (at least on my machine), called “My Playlists”. Don’t see the point of it being there if you cannot select other options.

Regarding the mockup - to be able to add descriptions to your personal playlists would be GREAT. Please keep that idea. Also nice to have a link to “favourites” rather than having to use the focus feature for this. Not sure about grouping “history” and “favourites” with the playlist screen as you have done here however. Also, I don’t see it on your mockup - but the user should be able to browse playlists by “artwork” (as is currently the case, though without the option to personalise the artwork), not just via the small icons in the menu on the left above.

But in practice, my listening habits are such that I never use playlists. Probably because I do albums.

I tend to buy/accumulate music in bunches, so it’s useful to me to be able to put all the albums I buy in the Spring into a group and then play it to death, eliminating stuff I don’t like. After I’ve internalized the music over weeks/months of play, I have a nice curated set, to which I can occasionally refer. I have old playlists by season going back 6-7 years in Logitech Media Server, so I can groove on the music that was happening when my daughter got married, or when I was bundling music for my portable used on a 3 week trip in Ireland. Playing back the sets brings me back to that time and adds another dimension to the music which is fun for me.

That said, I mostly listen to albums, so it’s not a big deal for the majority of my time spent listening.

Another vote for smart playlists!