After spending an extraordinary 3 hours at a The Cure 2016 tour concert I have created playlists from the concert and 4 encores set lists. Is there anyway or could there be to customize the playlists artwork like radio stations in the internet radio module. I got some good shots.

+1 … I curate (pun intended) a lot of playlists and would love a custom art work option.

What else would be nice: grouping tracks from the same album under a single cover art image, as shown in this iTunes playlist example: 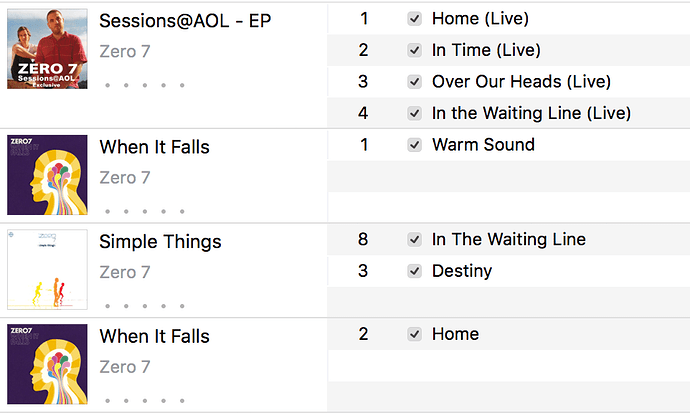 Just found this thread and will repost there.

We want your ideas for Playlists! Roon Software

Playlists are a notorious weak spot for us. None of us at Roon Labs are big playlist users so we’re looking to you guys for ideas on how to nail this. So I’d like to know how you use, think about, and create playlists. Do you want additional customization (images, descriptions, ect) of playlists? How do you want to browse your playlists? Do you want different ways to add music to playlists (smart playlists, filters)? Here’s a mockup of a work-in-progress playlists design. Disclaimer: all of th…

I’d really like to be able to add my own choice of image/ thumb nail to my playlists.

This is something that some of the big streaming platforms allow for and would be a great addition to Roon to personalize the experience.

Sure would… I was hopeful that when Roon completely revamped the UI that playlists would have seen some love.

And Tags could also benefit from custom artwork…