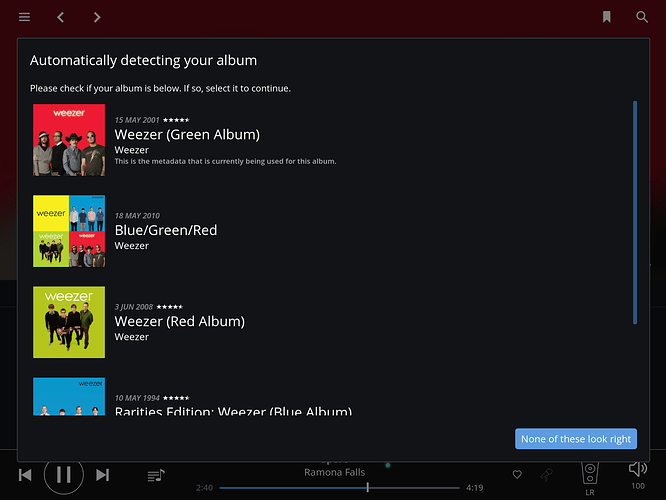 True, but that only fixes it for me. I thought reporting it would help clean up the Roon metatags. Is that not the function of this forum subtopic?

Can I bump this issue somehow? The metadata provider seems to be struggling to offer up the correct choices for Weezer albums. If you pick the correctly titled album (with the wrong cover art) the correct tracks are identified.

If you click Edit to select the appropriate album cover, the discrepancies get worse (Green with White). This is kind of comical given that the correct album cover is referenced directly in the title of the album: 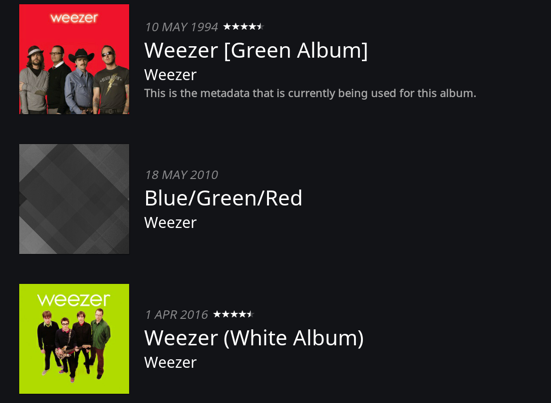 Yep, would be nice to have this sorted. Any ideas @support ?

Missed this thread, but this other thread is the same thing. We’re aware of the issue and are working on a fix. [Unsurprisingly, it’s confusion over the different eponymous albums when the (<colour> album) suffix has been stripped.]

Weezer’s latest album, Teal Album has a review of their first album and is stated to be recorded in ‘93/94. Even originally released in 94. Can’t be right?

This has now been fixed.

Thanks @joel. Metadata for each album does seem to be correct now however album covers are still swapped between green, red and white albums.

Hi @Astr0b0y. I’m sure that the covers will update the next time images for the album are pulled. If not, please let us know. Thx.