I noticed that Roon “translates” the Norwegian rock band Turbonegro’s name to “Turboneger” in various places.
While “Neger” would be the German translation for “Negro”, it is astonishing that Roon would try to localize band names at all.
Also, although I am a German citizen, all my OS settings use English as the default language, including Roon, so this surprises me even more… 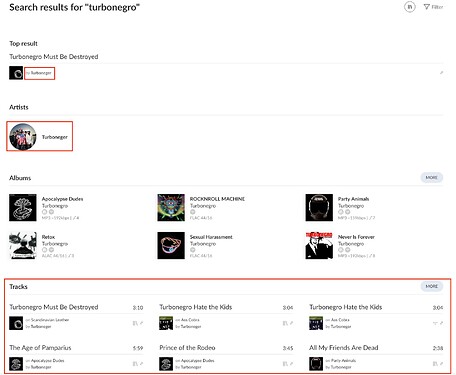 Doesn’t matter. The translation seems to happen inside the Roon application.

The band go by this name in their home country of Norway but use the more famous name for the rest of the world (for obvious reasons).

Roon is actually correct here but I would prefer it used the international name as Roon is a global product.

Note: I am categorically not a Turbonegro fan. The humour is lost on me.

Thanks a lot for clarifying!
I am not that much of a fan either, so I was not aware of the fact that they go by a different name in Norway.
I guess one never stops learning…

Anyway, at least it means that there isn’t some weird localization function going haywire within Roon, which is good news! 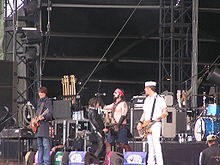 Turbonegro playing at the Southside Festival in 2005

Initially, the band had two running ideas for band names: Nazipenis and Turbonegro. They were advised that a band named Nazipenis would never sell records, so they chose Turbonegro as a more consumer-friendly choice. The band’s name raised some eyebrows and, for that reason, their first releases were sometimes branded “TRBNGR”, perhaps to preclude backlash against what some consider to be a racist name. However, the band’s stated motivations are anti-racist, an attempt to change the attitude of racism and nationalism perceived as prevalent in parts of Scandinavia.

According to lead guitarist Euroboy, the band name also has a peculiar origin. “I think Pål saw it spray-painted on a brick wall in a tube-station in a suburb of Oslo back in the day. It’s actually two Latin words. It means ‘fast’ and ‘black,’ and we thought that was a cool name for a band. Because our music is very fast and very dark. And also, it’s a name for a color. In the car industry, it’s the name for the paint, for the darkest paint. If you want to paint your car black, the most black colour of all is Turbonegro.”

What were they attempting to change with the name ‘Nazipenis’?