What can you expect testing Roon? My first two weeks in a nutshell

Not quit sure where to post this: it’s my experience until now - setting up and “tinkering” my Roon system, giving first time users some thoughts and tips to “streamline” the test period.
I am still within the first month of paid subscription deciding if I’m going for a longer “commitment” with Roon. Most of the tinkering is done on RBpi’s with Ropieee, but I decided to post it in the Roon software discussion section; feel free to move this post if it’s more relevant in another section.

Why did I try Roon?
The first time I encountered Roon was during listening sessions at dealers.
I liked the GUI and the amount of information, so decided to try it at home. The main reasons to do so are listed here.

Roon Core
I would have liked to install the core on my freeBSD NAS. But not being able to do so I decided to “tinker” another route: use an Apple box (we’re running 4 of them: 3 MacBook Air and 1 iMac). I tried the iMac but running the core on a box that is also daily used for other tasks does not work, don’t go there, I’ve tried it…
So I got an external ethernet connector to create a wired connection for a Macbook. I first tried to run the core over Wifi, but even though we have a solid and fast network, that’s also a “no go area” - esp. when using DSP.
The MacBook only runs Roon and is placed in the utilities cupboard together with the ISP box, main router, Sonos Connect and Yamaha Receiver (we really did place the receiver in a cupboard….) 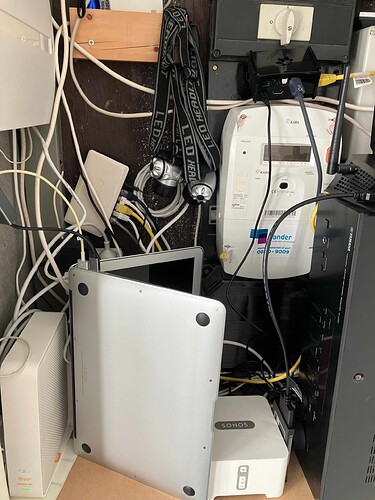 cupboard1920×2560 385 KB
Installing and setting up was straight forward, the NAS was quickly found (with SMB) and the database created. I also connected a SSD (sata to USB) on the main router to create a small storage location (Netgear’s USB-storage) I can use when I want to try other core locations or other streaming solutions like Moode, PiCorePlayer or Volumio.

Hick ups and stutters
As mentioned I soon found out that good advice needs to be followed: wired connections are to be made where ever possible between the system components, esp the Core and NAS. Although my local ethernet is good, 192/24 files playing from the NAS were occasionally (once or twice per day) interrupted with an error message:
“Roon lost control of the audio device” or “An audiofile is loading slowly etc). Because the connections are wired, there has to be an other explanation for this to occur: I’m investigating network traffic and/or a corrupted component somewhere in the hardware. I solved this hick up by placing the 192/24 files on the local ssd of the MacBook running the core. Needless to say that everything is now running OK.

Endpoints and RBpi’s…
All Sonos boxes were easily found by Roon. Also the receiver connected via Airplay. So far so good, but this also meant that the maximum bit rate was determined by Sonos and Airplay, 16max…. Although the Sonos Connect was setup to bypass the DAC and use the one in the Receiver, Roon only uses 16 bit on Sonos.
That’s where the RBpi’s enter the equation. Using HifiBerry hats I could create 2 endpoints: 1 with a Digi+ hat for the Receiver and 1 with a DAC+ for a Connect:Amp (line in).
Installing the Ropieee software I ran into something odd: the second RBpi was internally grouped by Roon making it a clone of the first one and unusable. It got listed in the audio devices in the settings menu but it didn’t show up in the audio devices selection list. Also when using the device setup menu, the given name from the second RBpi always changed automatically to that of the first one.
I found that flashing new images on the SD cards of both RBpi’s and installing them separately from each other before connecting them both on the system solved the issue.
I don’t know what triggered this: maybe Roon sees the endpoint before the setup of Ropieee and stores the hostname before I changed it? It’s something to take care of when installing multiple RBpi’s on a network.
Both endpoints are now working like a charm and deliver more than I ever expected!

Endpoints with benefits (pun intended)
I’m using Roon since December 21st. This weekend the RBpi’s are installed. What are my first thoughts about it all?
-I really like the GUI and the logical layout of menus and choices. It looks killer and works on all devices we own.
-The control over the actual streaming is amazing, I’ve never been able to control that many aspects of it.
-DSP has blown me away; what a possibilities to explore…
-Grouping works great - grouping Sonos was always possible, but hold on to your seat: when I group the two new endpoints (RBpi’s) one is using the line in from a Sonos Connect:Amp - by using the Sonos app I can create a Sonos group from this box and all Sonos boxes stream the music!! Despite not being possible within Roon, it can be done. (Check the audio delay setting on the used Amp, this must be set to minimal…)
-My receiver position can now be reached with 4 signal paths for comparing:
Airplay (16 bit)
Sonos Connect optical connection (16 bit)
RBpi Digi+ digital connection (HiRes)
Receiver app DLNA connection with NAS (HiRes)
-The tinkering required until now is easy and straight forward; lots of info to be found here in the community
-Although I wanted to install the Core on the NAS, I really think that’s a next best solution. I can control the Macbook with screen sharing from anywhere in the network, the GUI is off course way better than freeBSD offers. The computing power on the Macbook is also solely for Roon, the NAS has permanent other tasks to attent and already I’m having that tiny problem of the bandwidth (?) or speed delays with the 192/24 files.

My Roon Core is running on my 2017 MacBook Air which doubles as music player in the living room. I also have a Ziggo Connect Box from my ISP. Although my Core and the rest are connected to my ASUS router. The Ziggo Box and the ASUS are connected through Ethernet. All the other connections are through wifi. My local collection is stored on a 2 tb USB 3.0 hard drive which is connected to the Air. And I have a backup both on a separate hard drive and stored in the VOX cloud service.

I’ve been using Roon for just over 1.5 years now. On annual subscriptions and decided to go lifetime last month, before the recent price increases.

Roon is driving my whole network here. From USB DAC’s (iFi Zen DAC V2 and Audiotrak Prodigy Cube 24/96 Black Edition), to AirPlay devices like my new WiiM Mini streamer and my Harman Kardon Citation One speakers. The HK’s can also be accessed as a stereo pair through Chromecast.

Nice to hear your experiences.

A suitable ebay Intel Nuc running Rock with an internal drive might work nicely in your utilities cupboard!

Nice to see your post here and hopefully you will become a long term Roon user.
Your experience looks a lot like my early experience in 2019 when I set up with all Sonos and music stored on my Synology and lots of losing control of endpoints. Beefing up my home network was a requirement that I sorted out early in that journey.

I got bitten by the Roon bug and went lifetime and been a huge fan ever since,even though the Sonos experience has not always been perfect.

Thxs guys for the answers! Really like the “vibe” on this community.
And in the mean time we’re just listening and tinkering: convolution with measurements from Housecurve kept me busy for this afternoon: 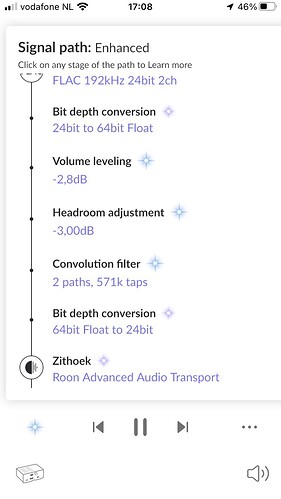