What is ROON downloading? 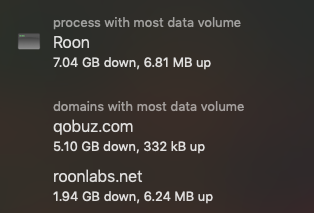 As you can see, Roon has downloaded 1.94GB of Data other than streaming songs from Qobuz, which is 5.10GB. What the heck did it download?

metadata and images most likely the bulk of it

In an hour? With no changes to the library?

I think Roon is rather open in its server logs about what it does / where it connects to. Maybe you could have a look into those log files and get an idea what happened.

In an hour? With no changes to the library?

Part of how Roon performs the way is does is by indexing all the music in your library and downloading detailed metadata for every album, track, performer, and composer, so this isn’t unexpected, particularly with a reasonably large library and/or a new install.

There have been no recent changes to the library and this is not a new library at all.

Where would I look for those?

Depends on what system your Roon Core is running. On macOS for example it would be in ~/Library/Roon/Logs/.

Thank you, but I can’t make heads or tails out of all that. Roon just updated and went through my Library again and re-identified everything. That seemed to be the overwhelming bulk of the entries (metadata) and it said I had “dirty tracks” which I find amusing even though I have no idea what those are.

and it said I had “dirty tracks” which I find amusing even though I have no idea what those are.

Here is some info regarding dirty tracks:

Memory leak? What does 'Dirty' in log files mean?

“dirty” is a technical term, not a problem. A dirty object is one that needs to be re-computed or re-indexed. Just about everything you do in Roon dirties some things and then cleans them again… Outside reference