What is your highest DR?

Just curious what your highest DR rating? Mine is 25 (!) by Hayley Westenra “Benedictus” from the album Pure.

Well thats good. I was beginning to feel inadequate…

Don’t know the highest, but my lowest was 7 for an SACD of harpsichord music. It is a perfect recording of an instrument with low dynamic range.

DR is a useless measurement for classical music, in my experience. This is why I want it to be optional and not forced on users.

I was beginning to feel inadequate

dynamic range is not an absolute… some of my favorite albums are <10 – and it has nothing to do with recordings… they are just low dynamic range. DR as presented tells you little about the volume of the recording itself. Program Loudness does.

Is there any way to sort albums by DR?

Chose Tracks than you can add Dynamic Range by clicking the Down arrow in the Column bar. 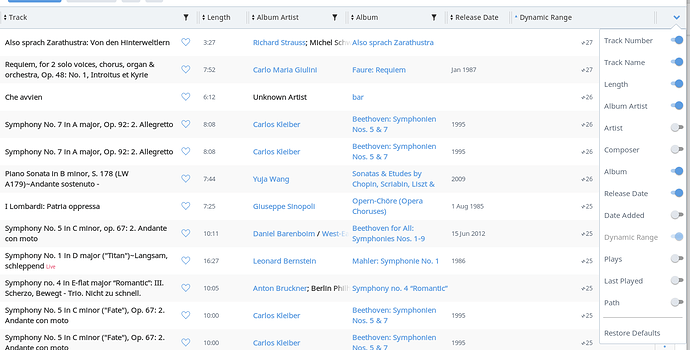 Great, thank you for this tip

Just realised you were asking for Albums…

Funny about the harpsichord. When the piano was invented, it was called pianoforte which means soft-loud, because it could do soft and loud unlike its predecessor keyboard instrument, the harpsichord and its relatives.
And here is the proof!

I have to admit to being a bit baffled by some of my DR values:

I would have thought (obviously erroneously) that the lower the value the more brickwalled the album would be. I thought this would definitely have a low value,

but have expected this to have a high value

I’m really surprised these both give a value of 3.

And this also a 3

Am I just totally misunderstanding what the value tells me?

Same here, JRiver tells me Fleetwood Mac rumours has a DR of 15 (CD) but Roon is saying DR = 8

Is the scale different to other scales like the DR database?

Yes. You’ll want to refer to this for the hows and whys:

Ah yes, the 2 methods are not comparable as per the last line : Though both methods portray roughly the same information, Crest Factor values aren’t directly comparable to values produced using the R128 method.

I just looked at Sade which is complete and ‘Promise’ has a DR of 13. Still I shouldn’t be comparing the 2 values - may be different scales.

So given the two different scales, what is a good DR value in Roon? In the DR database, anything above 14 is considered good.