What is your highest DR?

So given the two different scales, what is a good DR value in Roon? In the DR database, anything above 14 is considered good.

the dr.loudness-wars.info database idea of “good” is nonsense in my opinion. 1 DR Loudness Unit is 1dB – every 10dB is double the loudness. So a range of 10 DR is pretty dramatic if you don’t have any quiet parts, but it’s also not so dramatic if you have a lot of quiet parts. That tells you nothing.

However, a great example in my library is Death Magnetic by Metallica… normally a DR of 4, because it has been compressed to hell, someone found a version not compressed being sold with Guitar Hero for Playstation. Digital extraction of that led to DR of 5. Only 1 diff, but the Guitar Hero version sounds sooooooooo much better. That is what DR is great for.

Thank you Danny for the reply though to be honest I am still confused about the Roon DR. Can you please dumb it down a lot more for an idiot like me?

do you understand what audio compression is? or what it does or what it sounds like? if not, i’ll start there…

Sorry I understand compression and all that. What I didn’t understand in your explanation is how the Roon DR compares to the DR database figures. I know there is no absolute answer but what is generally considered a good DR the way Roon measures it?

Crest Factor Dynamic Range measures the difference between the average loudness and the peak loudness.

R128 DR measures the difference between the 10th percentile and the 95 percentile of loudness.

Basically, Crest Factor is average to peak, R128 is bottom to top.

I’m presuming then that the only place where the R128 values has relevance is in comparing different masterings of tracks / albums?

I still have difficulty here as I thought the DR (R128) value would somehow be an indicator on its own so that I could surmise something with a R128 value of 1 would most likely be a brickwalled mess.

So I fully expected this to be 1 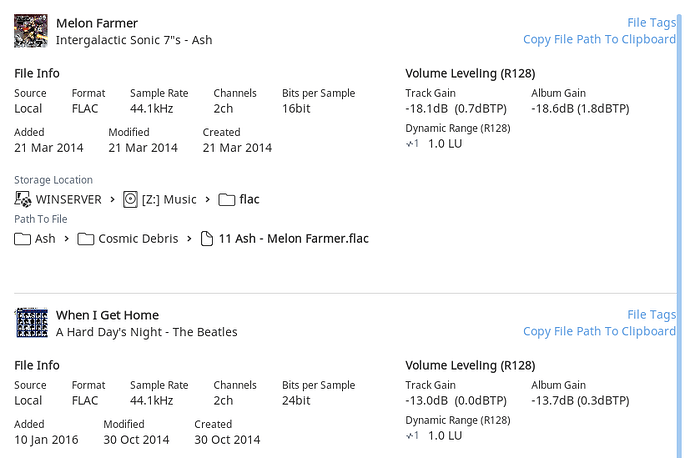 From the graphical representation these 2 files don’t “look” to have the same dynamic range and certainly the Beatles track sounds well mastered while the ASH track is headache inducing.

how could this have more dynamic range than the Beatles track above?

Would the track gain not give an indication of the program loudness.

The Beatles track is quieter then the Ash track yes.

It seems incongruous to these old ears that the Vampire Weekend track has more dynamic range than the Beatles track.

So be it if this measurement isn’t what I thought it was measuring, I’m just questioning in case something has gone wrong during my analysis.

I can’t believe I’m the only one surprised by some of the DR values?

The DR v R128 debate reminds me of the outside temperature meter in our kitchen (bear with me).

My American wife insists that we leave it on Fahrenheit at all times because this is what she’s familiar with from growing up & living in the 'States. Me, I’m a Brit and I grew up with Michael Fish talking about Centigrade on the telly, so naturally I want it on that setting. I can still admit and appreciate that Fahrenheit is more accurate (granular), but frankly I don’t care because I have years of personal experience and mental reference of what a specific Centigrade temperature feels like, what clothes I’ll need on the bike today and so on.

Coming back to music, I also have years of listening to tracks with measured DR ratings in front of me (JRiver & Foobar) so that, like the temperature outside, I immediately get a sense of what to expect in terms of compression. Sure there are some exceptions (eg tracks with lots of silence), but these are vastly in the minority. Similarly, I can reference the DR Loudness database and broadly get the same sense of a particular recording.

I guess what I’m saying is, R128 is clearly the more sensible metric from an accuracy point of view, but DR appears to be far more widely used, and therefore more useful in many ways (not including volume leveling here). I would really like to see Roon adopting both and giving us a choice.

I guess what I’m say is, R128 is clearly the more sensible metric from an accuracy point of view, but DR appears to be far more widely used, and therefore more useful in many ways (not including volume leveling here). I would really like to see Roon adopting both and giving us a choice.

Don’t forget R128 was implemented for quality volume levelling – not for the DR value police.

I think (as per the knowledge base article) that it is most useful for comparison of different editions of the same album/material. For example I have two versions of ABBA’s The Visitors. The 2001 remaster is rated at 8, while the 1982 CD was rated 12 (until I just checked again and it is now rated at 9!) - I think the visual plot is potentially more revealing (even in isolation). The 2001 version is mastered a few dB louder it would seem, and the plot is more obviously ‘maxed out’ forming more of a straight line. The 1982 mastering has more up and down in the music. (To be fair - there is much that is lovely about the 2001 ABBA remasters, even if I do prefer this version of The Visitors.)

With popular music, of course, the music will only have the peaks and troughs that the artists intended there to be. If they play loud, it’s going to be loud - there may be little natural dynamic range in the music, rather like the harpsichord mentioned earlier.

It may well be that having visibility of the numbers like this is a massive distraction - you can get much more out of actually listening than analysing the numbers. That said, Roon is aimed at audiophiles…

Says it all really.

Best I can do

I personally feel that the Crest Factor DR rating is better at determining what would be perceived as compressed (limited) vs. not compressed, maybe not in absolute terms but at least in the sense that usually less than DR6 would sound compressed and usually more than DR9 would not sound compressed.
From what I saw so far and from @Sloop_John_B’s examples, R128 gives me no such indication.

Best in my library…

After 30 hours my library is still being analyzed at about 1000 tracks/hour and my best DR is 26 by Mitsuko Uchida, Piano Sonata No. 2 in D major from the album Schubert Piano Sonatas.

However I did notice that I had one track with no DR value after my library finished being analysed, so I went into the track info and… beat that gain, if you can!