Unless its a Trade Secret could some one explain what sources of Metadata are used, I hear of Rovi, MusiCBrainz etc

Eg the Complete Beethoven Sonatas by Richard Goode has a MusicBrainz entry but Roon fails to ID it , it calls it Complete Op.10 instead, I merged the discs but still no joy

The Roon metadata service aggregates from a number of other services, including the two you mention. But it sometimes (more and more) does merges and corrections, so it’s not a simple matter.

I tend to use file tags in line with Rovi, not Musicbrainz, because of the latter’s regrettable habits with classical. This seems to help Roon.

As for Richard Goode, I just checked mine and it has full metadata. Only the album name is wrong. Just change it!

Use Allmusic (Rovi) website to look up the “correct” canonical work names and album contents. Roon’s interpretation of your tags will not stray much from Allmusic. It results in a higher success rate for IDing and recognition.

I wonder if Roon will use ISRC codes to do the match when they are present in the file (will mainly only apply to downloaded music – maybe on newer CDs ripped with software that knows about it as well).

To re-enact importing Goode’s Complete Sonatas from TIDAL to Roon, I just tried adding the album to my library.

What Roon provided was anything but “complete”. The sonatas were correctly grouped; that much was good. But no Sonatas were “recognized” or IDed in the importing process. Why?

Here are the credits for the album after import: 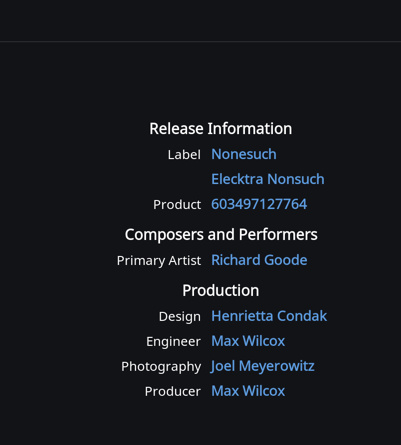 Three problems: no Composer, and no identification of Goode as a pianist. And on the tracks page (not shown), the works are not IDed.

“Oh well,” say the apologists. “There’s probably another ‘version’ of the album somewhere. Just go through the manual ID process.”

After that fails (and it did; no such version), then the Roon Rooters will gently say the album “just needs a little cleanup.” Here, I will manually enter ‘Ludwig van Beethoven’ as a Composer, despite the obvious fact that Ludwig is THE guy. And another tag for Goode as pianist in addition to the generic Primary Artist.

But I’m not done yet! The reason you add the tags, other than for completeness, is to achieve linkages between the works and the “rich metadata” Roon promises. And sure enough, Roon linked every work in the album. Touchdown. Sort of.

I say “sort of” is because a 100% ID success is the exception, not the rule. More likely, one or more works will remain unlinked, and unravelling these mysteries is Roon’s “weakest link” IMO. Possible reasons include:

So, to the OP, I answer: Mike, you are attempting to understand how Roon works in this area. You are better off accepting that it is not understandable without help from Roon, and Roon doesn’t provide that kind of help. They and others wish to keep the “magical” image alive which requires obfuscation. They don’t want you to understand how it works; they want you to accept that it works as well as it can given environmental constraints.

Use Allmusic web site (buy a $12 license to nix ads) for ALL ID answers. And edit tags with a tagger. Good luck!

Alas mystery is one thing but

Actually, I suggest “splitting the baby”: do a reasonable amount of tagging, certainly not exhaustive, before importing into Roon. Then, enjoy the fruits of your labor by having all the metadata that is available in Roon. If your success rate (of successful imports) drops below your threshold, re-evaluate.

I used SongKong before I imported the Goode, most tags looked good , but to no avail

The real issue is when Composition doesn’t match, you then lose track of a complete set of Beethoven Moonlight recordings , you need to know you have lost some , there is no tool to check

I can’t decide if Roon is Fun or Frustration at the moment , it’s not the super auto effortless experience I thought at first …

Yep. I once requested a focus feature that identified all tracks not linked to metadata. With 4K albums, finding the orphaned tracks is not a trivial task.

Did you try to Edit/Identify Album after the import?

And yet you still couldn’t get an ID? Or, did you get an ALBUM ID without any Sonatas being IDed?

I get the same credits as you showed

Sorry lots of frustration, this has been hidden for a year…

I am keeping JRiver alive for DLNA as my soundbar And wi fi speakers need it , it’s not helping . I need to can it but I can’t, every change in JRiver upsets life inRoon

ah, well, the problem is the absence of a composer tag, something you can add in Roon. But, that doesn’t explain why such basic tags are missing or undiscoverable…well, that’s a mystery.

is there an automated software lookup from Allmusic that you know about , looks like SongKong and Yate do it for MusicBrainz

I think I heard that SongKong would be getting aligned to Roon some time , Paul may comment sometime

Am I right in thinking that the Roon metadata is local to Roon once its been looked up or is it actively looking up for each album. Ie does it copy , correct and store the metadata ?

As it currently stands SongKong will help Roon identify more albums, and will give decent metadata for many albums that Roon cannot identify. But work is needed to support fields such as Roons PERSONNEL field and some further testing required to iron out quirks, I had hoped to have this already done, but such is life. If you would like to get some idea of SongKong accuracy/coverage the free SongKong Lite lets you run detailed preview reports over all your complete music library.

I have a SongKong license already, I was just wondering how potential Roon integration was going

I use it regularly to sort out difficult albums

We haven’t done that much specific Roon integration yet, if you have any particular suggestions or notice any incompatablities please let me know.