What to do with skipped tracks where "tag extraction failed"

I know this isn’t of too much import while some people are having serious issues but perhaps some of the beta testers can chime in with what they did with files where tag extraction failed.

Do I rescan in Roon?
Look at the metadata to see if I can divine the reason?
Re-rip the CD?

If it’s a FLAC file first thing I’d do is test the file: flac -t *.flac

If they pass that, load them in a tag editor, remove all tags and retag them.

If it’s a FLAC file first thing I’d do is test the file: flac -t *.flac

If they pass that, load them in a tag editor, remove all tags and retag them.

You’ll have to explain the test above in baby steps please!

Open command terminal, change to the folder that contains the tracks in question and run

flac will test each FLAC file and report it’s status. If they ll return OK then the files are not corrupted.

All that remains then is to load the files in a tagger like mp3tag, remove all tags in case any are corrupted then retag the album.

If you’d prefer to test using a GUI tool download audiotester from http://www.vuplayer.com/other.php

Thanks evand, I’ll try the download once Roon has finished analysing.

Did you have many skipped files?

Can you post a screenshot of your skipped files window? 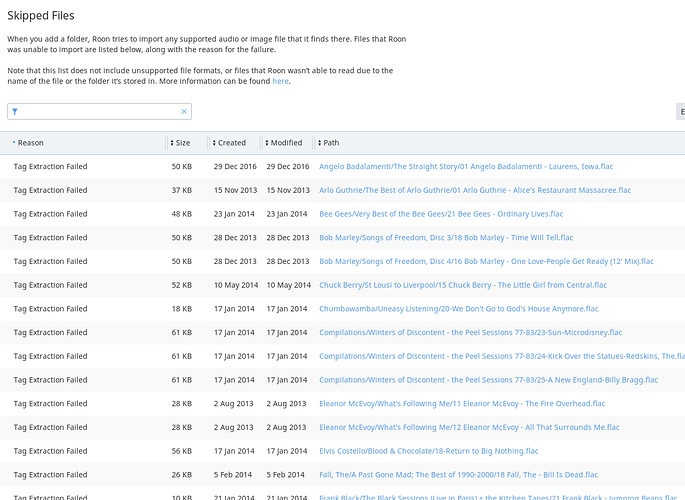 There are more but you get the idea.

There are 69 files in total and another 5 corrupt.

Those files are suspiciously small in size! Is there a chance that there’s another flac file (or other format) sitting next to each of those (with a slightly different file name) that are being imported correctly? In other words, is there another file for track 1 of The Straight Story?

It’s almost as if these stubs were created by some process and 1.2 just ignored them. Either that or 1.3 isn’t doing a very good job of figuring out file size.

That seems to be the issue with some of them.

unfortunately it looks like it’s rerip territory for a lot of them, still it’s great to know what was skipped.

I have about 75 mp3 files that are now corrupt that I don’t believe were marked as such in 1.2. They play in QuickTime (Mac) and through VLC. I have one other ALAC file for which tag extraction failed, looks to be a real file rather than a stubby thing of any sort, assuming file size is being calculated correctly. Any thoughts, @AMP? 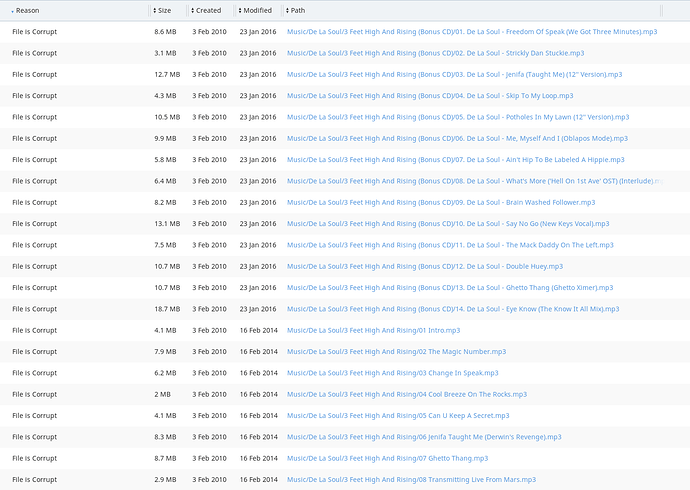 I’m guessing that @support is going to want to look at one of these files to see what’s going on.

Agreed, that’s what I figured, too. Thanks!

just one file reported as corrupted (… so far: 1.3 analysis is still in progress)

might be just a coincidence but file is from an album that for some reason 1.3 splits in three separate ones (wasn’t happening in 1.2)

Could easily be a malformed file header. Happens a lot. I had a couple of flac files like that. I used dbPoweramp to convert from flac to flac and the rewritten flac files worked.

Interestingly, these are copies of files I have in another library that is now also running v. 1.3 and the files aren’t noted as corrupt there. This is the only file format I have access to for these tracks. These files are legal downloads, but they are mp3 and I’m always a little leery of converting a lossy file to a lossy file. Thanks for the suggestion - any other way to figure out if there is an issue with the header (honestly, don’t know what that is) and fix it?

Transcoding lossy files is not the answer. Google for tools that check MP3 integrity.