This is emphatically not a complaint, but I’m curious - anyone know what’s going on here, and, more perversely, who gets rights when these are streamed ?

(unfortunately, taping wasn’t as widespread in the 80’s as it was in the 90’s, so we’ll have to make do with the lesser reincarnation of the New Kids on The Block as an illustration)

Why do you think they are bootlegs? Acc’d to the album pages, they are label releases.
Maybe the labels decided to make legal versions of bootlegs because they saw the bootlegs were selling?
It’s been done before by other bands.

Acc’d to the album pages, they are label releases.

Didn’t know that Nirvana were signed to Leftfield Media, “Records”, Southworld, House of Humbug, FMIC, and Doxy Records, among others. But this is 2020 after all, so anything is possible.

And don’t you agree that Performance (Live 1993) is just about the catchiest title ever ?

Doesn’t mean the band was signed to them; it could mean that the specific “album” was sold for distribution to whoever is listed there.
Look, I don’t really know.
I’m just saying that Qobuz has a label listed. I’m assuming this came in some kind of wholesale buy of material from one of the distributors that Qobuz gets music from. I think sometimes they buy a bunch of titles in a “basket” and it gets loaded into their database. It’s possible the distributor is selling them illegal material, but I doubt it.

It’s possible the distributor is selling them illegal material, but I doubt it.

Given that the alternative is that Grohl would allow for a release of something called “Easy Targets”, complete with tasteful reticle on the cover art, I’d call that “probable” more than “possible”… 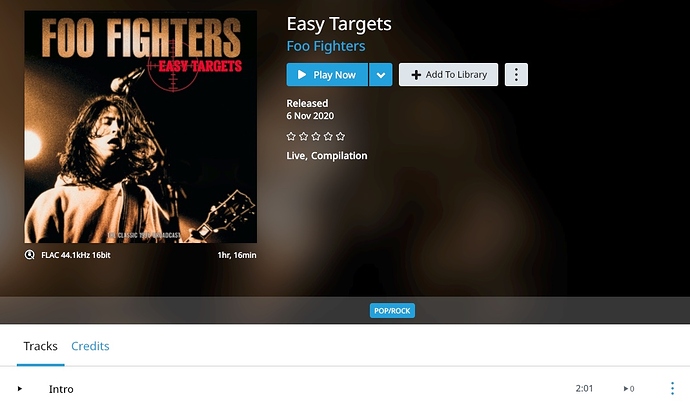 In most cases artists don’t have control over the music they make. Labels/rights owners constantly release versions, compilations, remixes that don’t have any input from the artist and are even actively opposed by the artist. Lawyers rule. The artist has no say if he’s intentionally or unintentionally signed away the rights.
Again, I have no idea about these specific albums.
Why don’t you write Qobuz and ask them?

These are all FM Broadcast recordings. Due to a loophole in US copyright law these can be published without paying the required mechanical rights to copyright holders. So, technically not 100% illegal, but yes, these are bootlegs and the rights holders won’t get a penny from these.

Aggregators who deliver content to Qobuz et al. should not accept these in the first place, but apparently quality control isn’t a priority for some of them.

Yes, I’ve also heard of Prince. This is something different.

Why don’t you write Qobuz and ask them?

Why would you assume I haven’t done that as well, and why would you assume that maybe, just maybe, the people here wouldn’t know more about things like that than people whose primary job it is to tell customers how to troubleshoot choppy playback ?

These are all FM Broadcast recordings. Due to a loophole in US copyright law these can be published without paying the required mechanical rights to copyright holders.

Thanks, makes a lot of sense. Thing is that Qobuz is French, and my subscription is European, so despite American imperialism and the hallowed Italian tradition of publishing rare and unlicensed recordings, it might not be that, in the sense that the infringement is European and thus would likely not be prosecuted in the States.

the hallowed Italian tradition of publishing rare and unlicensed recordings

Yeah, I think this is the equivalent of the bootleg CDs from Italy and Luxembourg that flooded the market in the 90s, and were readily available in stores due to some weird loophole. (I wish I bought more of those back then…)

Why don’t you write Qobuz and ask them?

For the record, their answer was “there are sometimes bootlegs, but they come from official channels” (distributors and labels). Looks like the possibility you suggested but doubted is part of what’s going on

(I’d still be curious to learn more about how that happens, though - @James_I, you know anything about this ?)

For the record, their answer was “there are sometimes bootlegs, but they come from official channels”

WTF does that mean?

An “official” bootleg, an oxymoron.

WTF does that mean?

An "official’ bootleg, an oxymoron.

Hey, don’t shoot the messenger… my read is that they’re saying what @danny2 figured, and yeap, it’s a bit surreal.

Not directed at you. I understood what you were saying.

Because when you’re dealing with the French, it’s always better to speak in a language they understand, here was their answer:

Anyway, there are lots of “official bootlegs” but obviously that is just marketing speak.

I do not see any of those albums available in my US based Qobuz and so it must be a jurisdictional loophole or license/copyright ownership limited to Europe. It does not necessarily mean an artist got ripped off, albeit this is likely to be related to some sort of right that an artist probably should have but for some nasty contract they signed!

Either that, or you’ll see them disappear in a few days…