I think my case is a good example for you as reference, because my hardware is on the edge but still can upsample everyting to DSD512.

Jussi will recommend you i7 7700K for stero-channel and i7 6950X for mutlti-channel.

Then DSD512 can be played smoothly.

I will build a dedicated PC with powerful GPU and CPU in the future, at the moment, I’m just squeezing my old PC unitl its wasted.

No it’s not quiet. That’s why it’s in a closet in another room connected by Ethernet to a microRendu, which is silent.

The Holo Audio Spring had 4 resistor networks. Two handle PCM and are R2R. Two handle DSD in a similar fashion to Jussi’s SC-1. Within each group one network performs the processing and the second is used to correct linearity.

The surface mount PCB with the resistor networks is double sided, repeating on the underside: 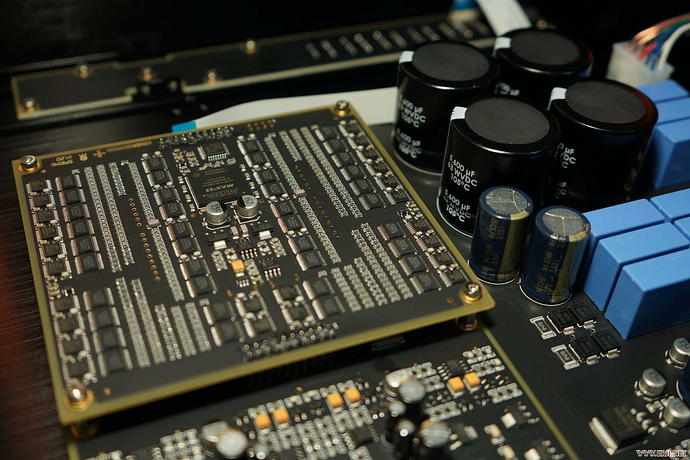 Well done, the picture you upload is valuable for Jussi to make further comment

Guess he is more active on CA

Wow! Now I’ve more reason to up grade my Zotac i5 fan-less Mini PC to a more powerful ones. I was thinking of this:

The loud ‘pop loud’ seemed to happen when Holo Spring is used in Linux OS, I read from Computer Audiophile, but Windows with the Holo Spring driver shouldn’t have any loud pop, probably some low level clicks when switch tracks.

If I turn off CUDA I get some pops with the i7 7700 alone. CUDA makes all the difference, so a case with a slot made sense for me.

As I said, some Rockna wavedream users I know feel no difference in terms of DSD512 compare to DSD64, 128,256, or even think PCM sound is better than DSD512.

I’m not sure about Rockna wavedream DAC, there’s no mention in the website that they can do direct DSD conversion in the R2R converter. Is there’s a possibility that Rockna convert DSD to PCM to the the R2R ladder DAC? If there’s the case, there will be little SQ difference between different DSD sampling rate. Again this is just speculation but it will best to ask Rockna directly.

What is CUDA? It is some kind of hardware accelerator?

(since it is mentioned by someone on some thread in China, the person sounds like an technician-ish guy connected to Rockna)

There are even some nasty commercial review regarding Rockna vs Holo spring dac on Chinese Hifi thread. (Better not discuss it further, becasue it’s quite sensitive)

That’s why I tell you this is a typical example of meaningless DSD512 on R2R dac. Because in practice, DSD512 brings no SQ improvement.

There is no DSD512 recording, so upsampling is the only way to get DSD512, but does no-SQ-improvment DSD512 is the purpose from HQplayer? I don’t think so.

CUDA offload, is a feature when your CPU is not powerful enough, by using the Nvidia graphic card’s CUDA floating point to ease the load from CPU.

Thanks @Wei_Xia1, looks like I need to build a custom designed PC with i7 and Nvidia GTX-780 graphic card to do DSD512. This is going to be tough. Any off selves ready made PCs that may contain the above components that I can purchase directly?

Sound gallries SGM is a beast audio PC for T+A DSD512, but for that price, I’m not going to pay for it even my wallet is heathy enough. It’s just my personal opinion or my personal attitude towards what kind of things I should splash out or not.

GTX 780 is not good enough I’m afraid, flagship serious double-precision graphic card like Titan is a good choice. But please note that HQplayer relys on CPU more than GPU, so a powerful CPU is crucial. (Jussi is a nice person, mentioned the setup lots of times since so many users ask him the same questions from time to time)

The Noise from the fan is also a factor to consider, CPU water cooling system or low-speed, low noise CPU cooling fan is the way to go.

Check the link of Jussi’s recommendation.

Ive heard many water cooling systems are made inching and not of great quality or leakproof. I would stick to passive or large area slow fan options.

the newer 1070 cards are just off the high end prices of the 1080 cards and should be adequate I was told. YMMV

You will also be needing a good smart fan power supply 550-600W+ and a fairly sizeable case to fit all of this in too…no SFF options I’m afraid.

I agree re T + A DAC8 DSD and higher rate DSD. Loving it!

Good to know, thanks.

You might consider opening a new thread for that

@David_Christie I’m curious what Dsd you are using and if its native files you are playing or upsaming ?

Ill kick this off… seeing as some are asking Streacom make some nice fanless cases…but your typical thermal range maxes out around 95W so that limits your CPU choices. Im currently using i5-6500 with FC8 case and pico 150 power supply. Asus H110 Mobo and 16GB ram and I can use Roon 1.3 DSP upsampling to DSD256 at 1.1X without any drops that I have heard - Core and USB ASIO R2R DAC on the same machine. http://www.streacom.com/products/fc8-evo-fanless-chassis/ […