Roon can and should do that.

And Mike said they are working on it. So presumably it will get sorted or improved. So what’s the big issue? Is this just an I WANT IT NOW! thread?

We’ll see. A few of us are skeptical that it will ever be fixed.

This issue of butchered and cropped photos first came up when the previous release came out. When was that? 1.5 or 2 years ago?

It was never fixed. Now it is back, just in a different form.

So, no, this is not about immediate gratification. This is about a glaring problem that has existed in one form or another for 15 to 24 months.

And why couldn’t they at least fix the problem of thousands of empty circles (with only initials) in the last release of bug fixes?

The fear of some of us is that will end up in the same category as the vertical mode for iPads, and Roon will promise to address it but it will take years.

If we are wrong about that, all that Roon management has to do is post here, and give us a time frame for when the butchered photos and empty circles with only initials will be fixed.

We’ll see. A few of us are skeptical that it will ever be fixed.

Improved I imagine, you still can’t beat a human when it comes to some of this stuff.

I have nothing against round photos, and I’m guessing that would place me among at least half of Roon users. However, I do have something against photos that are improperly cropped, whether round or square.

I agree, as I explained above. Either is fine with me, so long as it is cropped OK and not butchered.

The thousands of empty circles are also a serious problem, because if Roon adopts square photos, we would still be looking at thousands of empty squares with only initials. It is even more of a mystery as to why that is happening, as I explained above.

And why couldn’t they at least fix the problem of thousands of empty circles (with only initials) in the last release of bug fixes?

I may be wrong, but I think that the artist photos are supplied by the metadata providers, so this isn’t a bug - rather an omission on their part, and the quality of data isn’t down to Roon. Sure, they can complain about it, as can we, but it’s not their responsibility to provide an artist image for each and every artist.

It is even more of a mystery as to why that is happening, as I explained above.

I agree with the problem of empty circles (and round photos), not necessarily the solution.

I don’t think this is so easy to do automatically. I think you are saying the image for any Artist that has a known individual as the “lead” should be the picture for the group.

This shows the correct images for Pat Metheny Group and Pat Metheny Unity Group and missing one for the Trio. I do not think (had the two group ones been missing) that four of the same solo pictures of PM would look good.

I do think there should be a systematic way to report meta data issues and image issues. Maybe a right click menu choice, not something too visible. As we all know, Roon ingests a data feed but we need to be able to flag things that are not right.

I also think there should be MULTIPLE provided images per artist that can rotate (in Playing Now for example).

I may be wrong, but I think that the artist photos are supplied by the metadata providers, so this isn’t a bug - rather an omission on their part, and the quality of data isn’t down to Roon.

Many thanks for the explanation. If that is the case, then an entirely different design would work better, as in a list of similar artists typed out in a box, or on the side, etc.

That would be an improvement over looking at thousands of empty circles with initials.

P.S. – I’m referring to the many empty boxes that appear under many artists, under the category of similar artists or composers. They could be put in a box in a list.

The problem of butchered photos would remain, but it would also be minimized.

Hardly any of my fotos are from metadata providers. Those are usually low-res mugshots, if at all (most are missing, in fact)

Therefore my artist/composer fotos I added myself and Roon jerks them up in the “bubbling” process.

But World class design at most, isn’ it? 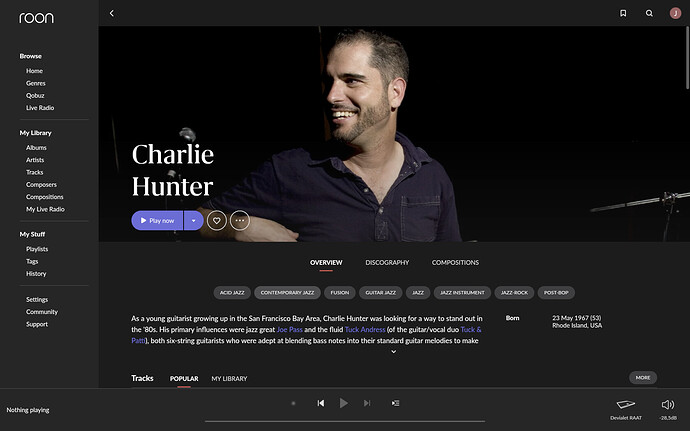 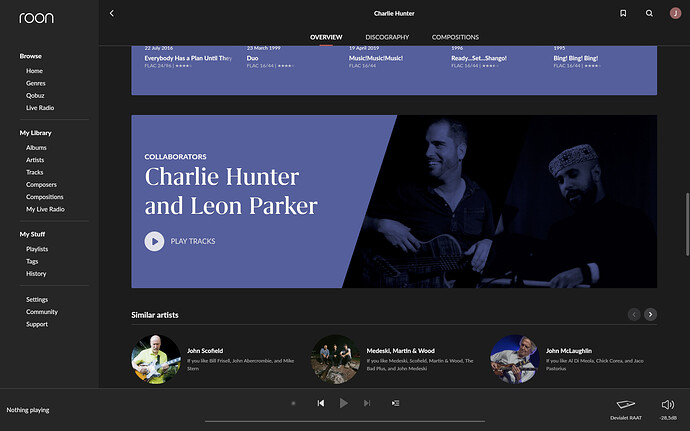 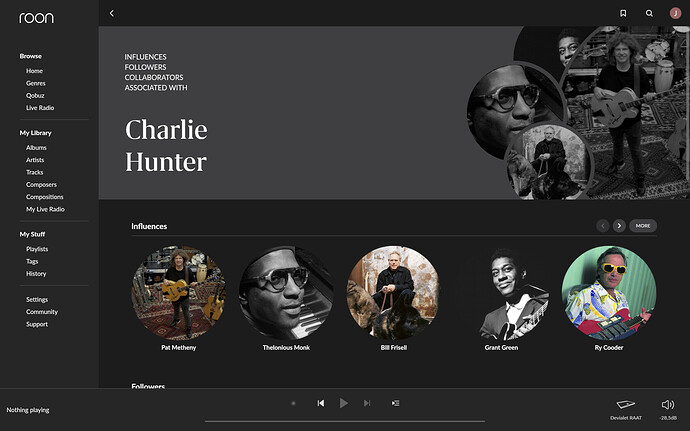 How about a lockdown project

Clamp on a pair of headphones , find something soothing to listen and go and find the best photo that suits your requirements. A touch of memory lane .

Some of the given ones are a bit Lurid ,m check out led Zeppelin

As any professional photographer will tell you, you just don‘t place the subject straight in the center of the frame for a portrait. It just looks dumb and amateurish. You put him/her a bit to the right, a bit the left, etc… It is called „the rule of thirds“. Since a few years with the spread of the 16:9 format, it has become quite popular to go a bit to extremes with that approach. See that Melnikov picture I posted.

The fundamental error is the poor cropping of the picture that ends up on the specific artist page. That’s when you want a good picture. It should convey information and emotion. When it’s cropped bad, you lose both. It just happens that the same picture used for the Artist page is also used for artist in circle. In some cases the photos for artist page are great. But many of them are either meh or they suck. THAT needs to get fixed.
The artist in circle has other purposes and they are served whether the picture is poorly cropped or not. It would be nice if they were cropped better. But its essential the photo on the artist page is done right. Aretha Franklin probably ticks a lot of the boxes for artist in circle, but this is just wrong.

yep looks way too close-up. wrong cropping is a sub-problem / further problem of the issue I described because here the focus is not on face but on eyebrowes 🥸

I, alec_eiffel, support this thread

Nobody complained about the artist page in 1.7, that is the bottom line.

Untrue. But unfortunatly they did only a paint job on the surface. The plumbing is still broken.

Not at all true. When 1.7 first was released, they did use circles for artists. The complaints and push back were strong enough that they restored squares in a subsequent minor release. (I assume it was due to feedback, but maybe other, behind the scenes, reason.) Why they want to try again, I cannot fathom.