I’m surprised that Roon has already done several bug fixes to version 1.8, but done nothing about the circles for the photos of artists. This was a problem one year ago in the previous version, but it is now much worse due to the use of circles for photos.

Square photos would make much more sense, and in many cases, the photos would not be so badly clipped. I have attached examples, and hope they post OK as I reduced the size for posting.

Seriously, when artists like Miles Davis, Art Pepper, Sonny Stitt, Joe Henderson, and Hank Mobley are clipped beyond recognition, it is time for Roon to address the problem.

Many of these circular photos are simply unidentifiable. Davis with his head cut in half, Pepper reduced to a moon-like sliver, and all you see of Stitt and Mobley are the saxophones with the artists completely missing. There are hundreds of other examples, if not thousands, across all of Roon.

Square photos would be a good start for fixing this problem. 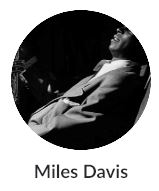 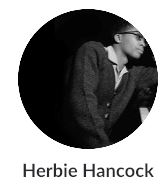 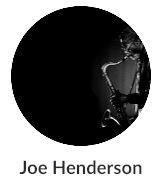 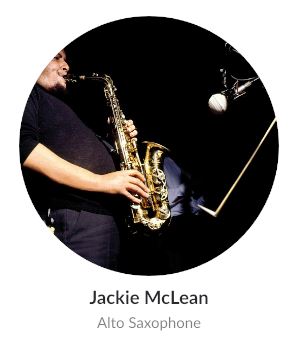 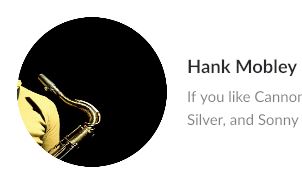 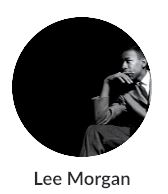 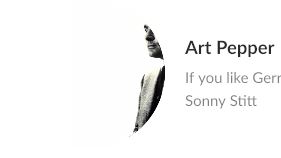 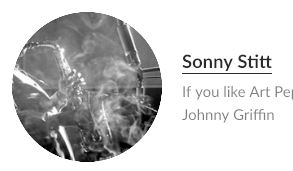 Not the answer you will particularly like, but FYI:

We have some improvements planned in this area, to ensure we get the face properly centered in various views. Not quite ready to say more, but we’re aware of the problem and have a plan. Stay tuned!

I’d prefer that Roon fixes this in their own algorithm. I have no desire to manually fix their photos. I appreciate the above posting that it is on their radar, which I wasn’t aware of, but you’d think it would have been a higher priority issue that would have been fixed by now.

I guess circles are more artsy and high tech. Square photos are far more functional though. Roon starts with square photos and tries to force them into circles.

This is the Roon version of forcing a square peg into a small hole.

Also you might not be aware that the UI on desktop remotes (not phones/tablets) can be altered to show whatever shape you prefer, as well as changing the fonts and colour scheme:

There are quite a few modded themes being posted, in various different threads, so I though it might be a good idea to start a new one where we can gather them together and share ideas. I’ve included my recent efforts below - a set of largely monochromatic themes with a muted accent colour. I’ve also included a Dropbox download link if anyone is interested in grabbing them. Be warned, modding the theme files is not a supported feature, so proceed at your peril. I would also suggest that you do…

Of course, not the ideal solution, and obviously tinker at your own risk (backup).

Seriously? Your solution is that the customers who paid for the product should have to manually fix the butchered and laughable photos in circles?

It is long past time for Roon to address this. There are hundreds, possibly thousands, of butchered photos spread across Roon, and all because the so-called art designers of Roon thought it would be cute and neat to force square photos into small circles. This design wouldn’t get a passing grade at a high school class of art design. The results speak for themselves.

I expect Roon to fix this, and not force their own customers to have to do it for them.

Restoring square photos would be a good start. Then developing algorithms that can utilize face recognition would be next on the list.

I’m bowing out now, I’m just a user like you, trying to help/inform other users.

This design wouldn’t get a passing grade at a high school class of art design. The results speak for themselves. 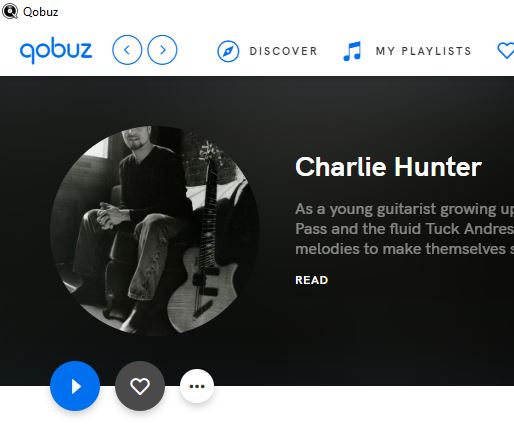 Perhaps not harsh enough if others have done it first and we can see how poor a result that has been but Roon decided to do it anyway.

Roon are far from alone in adopting them for artist pictures. As such, maybe your criticism is a bit harsh

I don’t believe that the management of Roon will defend themselves by making the same argument as both of you. If they did that, the Roon management would be saying the following:

“We adopted this lame design, that results in many butchered photos, because Spotify and Qobuz have already done it. Yes, we agree that the photos are butchered, and silly because in some cases they show a musical instrument but not the artist, but since our lame and incompetent competition have already adopted this practice, so will we. Please look at the examples of the butchered photos from Spotify and Qobuz that we have provided to defend our artistic policies.”

I don’t expect the management of Roon to respond with the above, or anything close to it.

It is equally silly that the Defenders of Roon At Any Cost adopt the same argument.

It should be noted that in one of the examples provided, if the original square photo had been used in the original format, the severely cropped photo would not have occurred.

Roon prides themselves on doing it better than everyone else. Otherwise why would we pay for their service? They claim to do it better and smarter than their competition. And on the whole, I believe that they do so, which is why I paid for lifetime service.

This is an egregious example of where they flunk their own standard. I would point out that in my original post, at the top of this thread, I asked why they haven’t already fixed this in the latest set of revisions. If they had done so, my post would not have been necessary.

It should also be noted that others objected to the use of circular photos as a bad design choice. I don’t know if I care whether photos are circular or square, as long as the design choice actually works.

This does not. This is Roon smashing a square peg (square photos) into a round hole.

Compare Album to Artist pages. Its a joy to scroll down the albums page. Scrolling the artist page is immediately annoying, never mind the partial images, it just does not feel right, and somehow not as legible as it should be. We will get use to it, but it is a big step backwards.

Scrolling the artist page is immediately annoying, never mind the partial images, it just does not feel right, and somehow not as legible as it should be. We will get use to it, but it is a big step backwards.

I strongly agree, as do many others, based on the comments about the empty circles that only have initials. I chose to only focus on the butchered photos, but the empty circles with only initials are also an egregious design flaw that should have been fixed by now.

There have been hundreds of critical posts (probably over a thousand) about the new design, so this might have already been addressed by the management of Roon. If not, maybe they can respond here.

There is simply no reason that we have empty circles (with only initials) in two categories:

(1) Empty circles with only initials on repeat references to the same artist. I have posted two examples related to Miles Davis and Benny Golson. In both cases, the algorithm fails to fill in the circles that have repeat references to the same artist. Why is that? It should be a simple matter to tell the algorithm to pick up the reference to the name and fill it in.

(2) Empty circles with only initials on many well known artists where photos are clearly available on the internet. I just went down the first two letters in the alphabet within jazz, and found missing photos in the jazz genre for Pepper Adams, Ahmad Jamal Trio, Al Cohn Quintet, Art Blakey Quartet, Ben Webster Quintet and Blue Mitchell Sextet, and the list goes on from there.

Why can’t the algorithm find photos for such famous artists, all of whom have photos all over the internet? It appears that because another word is added to the name, such as quintet or trio or sextet, it causes the algorithm to completely fail. This is nonsensical.

Roon management, you can do better. Please fix these glaring and egregious problems.

Not sure. I take my prime example. 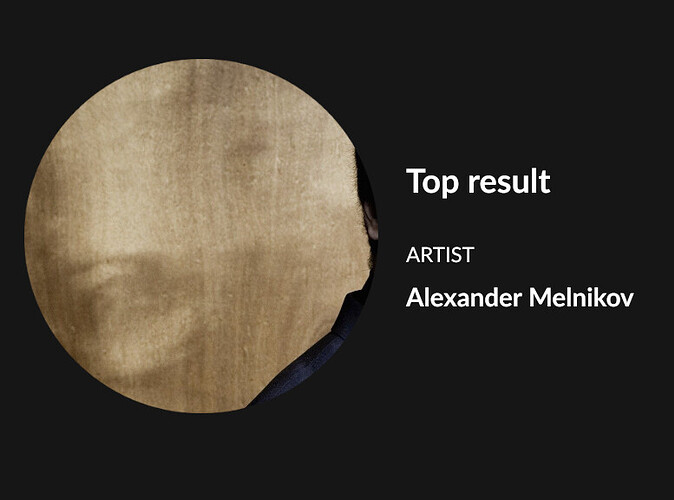 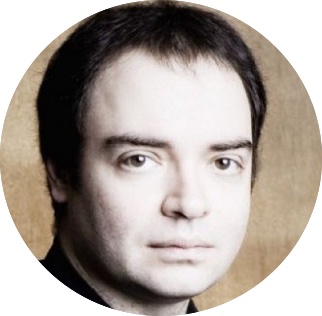 Charles Peterson is correct. If that was a square photo, the face would have been centered correctly. Your example is a very long rectangular photo, and the resulting cropped photo fails in the circle, and would likely fail in a square. I suspect that this is also why other photos, like Hank Mobley, fail with equally disastrous results.

With that said, if Roon used square photos the failure rate would be considerably reduced, even if some automatic crops would still fail, and that would be the case in the example you posted.

If you look at the cropping of many circular photos that at least manage to capture the face, they would look better as originally formatted, namely as squares.

The circular crop results in wierd results in many cases, even when the face is captured.

yes, but its no argument against bubble shapes. If Roon cant auto focus on face, lets get something where we can shuffle the foto until it looks right, like on social media profiles etc.

In one of the posts earlier in this thread, the argument was made that Roon has apparently provided the ability to do that. I simply have no desire to edit hundreds or thousands of photos. If Roon reverted back to square photos, the problem would be immediately and considerably reduced.

Then Roon can address the thousands of circles that only contain initials, as I explained above.

I have not seen that ability but I will look again

I am referring to a post earlier in this thread. I have no idea if that precise ability is provided. I have absolutely no desire to spend the time to fix this. Roon can and should do that.