Where are improvements to sound quality?

There are a lot of reasons to use Roon, and people use it for different reasons. But one thing everyone wants is best possible sound quality. However, as far as I can see (or hear), there haven’t been a lot of work in this area lately.

One way to partially solve this is to support VST plugins (especially now with Dirac requiring a VST host), but that seems to be a dead issue. A separate VST config program that has to be run locally with headless use in an endpoint would be enough The config app could even be a web app provided only the generic VST properties are shown, which would make it easier to integrate to ROCK and Nucleus.

And playing music locally from Roon sounds slightly worse than from Audirvana, which might (or not) have something to so with the rich GUI Roon has.

Finally, while the convolution engine seems fine, the PEQ could be improved upon. It does not sound as good as the best VST PEQ plugins out there like FabFilter Pro-Q 3 (which also has a very nice GUI).

Don’t get me wrong, the improvements to Roon lately has been nice, but I think some effort should be on improving sound quality, especially VST support and improved oversampling.

I noticed several folks reporting slightly improved sound quality in the 1.7 release. I didn’t really notice an improvement, but I was in the middle of new equipment break-in.

I turned off all processing in Roon (before I made the equipment upgrade), and I noticed an improvement in SQ. No upsampling, oversampling, normalization, room EQ… nothing. I’m not sure how to describe it, but I enjoy the sound better without the processing. 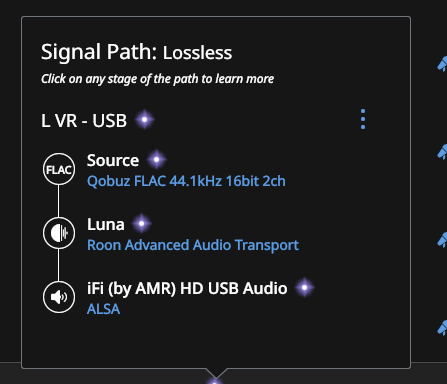 Frankly, some of the claims here are completely unsubstantiated.

First, even if Roon wanted to implement VST it would be problematic because VST plugins aren’t really designed to be run headless. How would you thus control the plugins via a Roon Remote?

There has yet to be any demonstrable improvement from oversampling. That said, if you do choose to use HQPlayer, it’s integrated with Roon. Probably a cleaner solution instead of keeping your CPU super busy is to use something like a Chord M Scaler which uses an FPGA.

I do agree the Parametric EQ could use some more customization. Not sure about the issues with sound quality.

Finally, Roon in most cases will output a bit perfect audio stream. I can verify this by comparing the PCM stream sent to a virtual DAC vs. the original waveform. Assuming Audirvana does the same, the only possible explanation for a difference is that you’re not volume matching perfectly when A/B testing.

Its a little more complicated than that, but I am not going to get dragged into yet another “bits are bits” discussion. And for VST I already said a config app would be needed, but due to how VST works with local GUI the control app cannot be Roon unless Roon is run on same host as endpoint.

Besides, this is a feature request for a software I pay for, answers like “buy this and that instead” is not very constructive.

If it is a Feature Request, then it should be in the appropriate section, if you want I’ll move it there.

You decide, but it was more meant to be a discussion about why Roon hasn’t seen much in the way of SQ improvements lately.

I’d like to say first thank you to you @Magnus for all your work helping me and others with convolution.

I believe I realized a modest bump in SQ from 1.3 to 1.5 or 1.6 and a touch more with streaming in 1.7. I understand there have been improvements to RAAT but the Roonies rarely comment on SQ rather leave it to the inmates to discuss and debate.

That said, it would be very cool to be able to experiment with VST plugins.

Just use this one https://www.menubus.audio/versions and you can use all the VST plugins you want. Works like a charm

Mac only and no longer being developed according to that link. Any Windows equivalents available?

meant to be a discussion about why Roon hasn’t seen much in the way of SQ improvements lately.

My guess is that no one who works at Roon feels that it’s necessary. My take is that it’s their project; we’re just along for the ride.

1.7 requies more processing power. Has anyone else noticed this? Has Roon acknowledged this?

I’m running Linux version, others could very well be different.

I don’t want the software to improve sound quality, I just want it to pass through the most pure signal to the DAC. IMO, the less software DSP, the better. That said, it should indeed have the best quality DSP possible (ie EQ or crossfeed etc), when the user enables that. I think Roon already does.

Thank you @Magnus for posting this topic and for the level headed way you presented your observations and suggestions.

I personally do not have the opportunity or time to experiment too much with different solutions, but I am glad that there are those of you who are better informed and possibly have better equipment and are able to share your experiences and thoughts on improving our music listening and enjoyment.

I would definitely greatly appreciate it if the audio quality continues to improve, and I would assume the everyone in the Rooniverse would not have any objection to that. The questions/debates will be:

It would of course be so much better for us if Roon was to share a very high level roadmap of areas they are working on in the near/mid term (e.g. in the next 12 months). Even if it was a bullet list like:

…but I realize that topic has been argued to death and we have no choice but to accept Roon’s closed approach.

In the meantime, I am enjoying what I have and continue to be enchanted by the music.

don’t want the software to improve sound quality, I just want it to pass through the most pure signal to the DAC. IMO, the less software DSP, the better. That said, it should indeed have the best quality DSP possible (ie EQ or crossfeed etc), when the user enables that. I think Roon already does.

But how do those people compare 1.6. and 1.7? After updating to 1.7 they no longer HAVE the old version (at least not on the same device)! Are they trying to “remember” what Roon “sounded” like BEFORE the update? Are they comparing the two releases on different Core Machines? Apples and pears…

And playing music locally from Roon sounds slightly worse than from Audirvana, which might (or not) have something to so with the rich GUI Roon has.

This can be avoided at least on the core with Headless RoonServer options on all platforms, but perhaps ROCK and Roon’s own Nucleus platforms will best perform headless.

Maybe other options like Fidelizer for Windows could also help.