Where can I sort playlist songs? 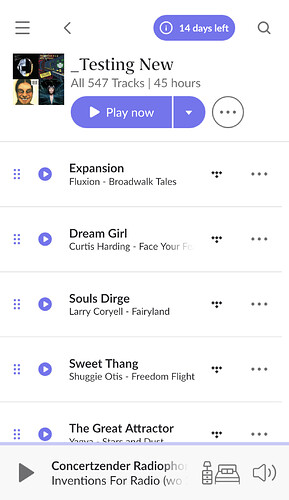 This is the “all new” 1.8 version. Much advertised. I’m trying it now just to see. Still the basic feature of playlist sorting by recently added songs seems to be missing. Or sorting by anything really. What am I missing?

Hello @NearlyNormal, unfortunately, because of a mobile’s restricted screen size, not all of Roon’s functionality can be provided on these devices.

The facility you are looking for exists on tablets and larger.

Which is why Spotify, Tidal, all have this simple functionality.

Whatever… disappointing app as always, even in the magical 1.8.

It’s understandable that there are restrictions because of the screen size. That doesn’t mean that quite basic and very important functionality has to be hidden completely. It just has to be presented differently.

Can you present it as a table with sorting and filtering like on an iPad? No. But the sorting code is already there. We’re only asking to have acess to it, even if it’s just like tidal (sort icon in the top and selecting the sort order from a menu).

Interfaces should be designed with the smallest devices in mind so the most important functionality gets prioritized. I’d argue that being able to sort playlists would be one of the top priorities for anyone using playlists.

I use playlists all the time and my Roon usage is 99.9% on my mobile phone. This means that it currently is an extremely frustrating experience since most of the time I want to play the most recently added tracks first. When you have hundreds of songs in the playlist this gets annoying really fast.

It only adds to the frustration knowing that it would be extremely easy to add, especially since it’s already available on other devices that run the same operating system. That means the supporting code is already there, it just needs to be added to the user interface.

Thank you for this patient note, it captures everything that’s needed and yet very frustrating in this basic expectation from a UI. Keeps me going back and forth on Roon.