Where do you place the NAS in your hifi setup?

I recently moved to QNAP TS-253D NAS driving my Roon core instead of my gaming PC. Now I’m wondering if it’s best to position the NAS as far away from rest of my hifi-system or as close as possible so I can directly connect it to the closest switch? Any advantages/disadvantages on these options? So in my case the NAS doesn’t only work as storage but also runs the Roon core.

Currently the NAS rests on the same AV-rack as rest of my system. I’ve isolated my gear on the rack but what worries me little is the switching PSU connecting to the same power strip as rest of my gear. I’ve read about about leakage currents and noise which can travel to rest of the system from SMPS. Do you find this as a problem? I have an option to move the NAS to a different room and access it over the network in my apartment. Would this be a better option? Thanks

I personally have my NAS in the entry area of my flat, away from the living room, since I can hear the hard drives if I watch/listen to silent movies/music. I use power LAN to connect the NAS with up to 650Mb/s. For music streaming the bandwith is not so important but the latency is, so I would look into that (i have 2,8 - 4ms average).

If cables can be run, this is ALWAYS the preferred way to build a network at home (at least for me).

I just rearranged all my power so only hifi came off one power feed and it did make a difference.

Might not makes any difference, I had about 13 things plugged in.

If you can do it easily move it and give it a try, mine is in the garage but I don’t use it for music as I only stream from Qobuz now.

Well I decided to give it a try. Moved the NAS to office where I have two ethernet wall sockets so I don’t even need extra switch for my PC and NAS. Now the data travels through my Asus AC86U router from office to living room. Works great and I can’t notice sound quality getting worse, maybe even slightly clearer now but might just be placebo.

probably, I never had influence on quality of Bits and Bytes…

I always keep my servers in the server area in the basement.

NAS is on a high level shelf in garage next to router and a rack box containing gigabit switch, the ROCK NUC core with the main music library on USB HDD and junction box for ethernet wiring throughout house.

My core is a tower PC full of drives, it lives in the study , doubling as my normal PC , well away from listening areas.

It’s not that noisy but …

The reason I moved to NAS was that I didn’t want to keep my midrange gaming PC (also in tower enclosure) always open while playing music.

I’ve built a small form factor PC that’s always on as a new RoonServer. It has some local files but mostly streams Qobuz.

Energy consumption is a tad higher than the NIC8i7BEH I’ve used before but I can live with that. It’s around ~25w in idle with an Intel i710700K and an RTX3080. It’s sitting directly on my desk and is completely inaudible since it’s only using SSDs.

Running the core on my Synology DS918+ worked not as well as I thought it would but it might have been other things causing problems I’ve had before.

Anyhow, I think it’s fine to use a NAS if it works well for you. Just keep it away from your main listening areas, hard disk noise is usually pretty intrusive. Also check if there’s a quiet setting for the fan configuration. The Synology ones have that

That’s some powerful server you have there. I guess you use it to something else than running Roon server also? Surprisingly low idle power consumption though.

QNAP has quiet fan option also, I have it on. Though now in the office it doesn’t matter that much. As I wrote earlier, I didn’t find HDD sound (5400rpm WD Red) problematic.

Good to hear! I wouldn’t overthink it then if it’s not bothering you. Your WD Reds seems to have a good noise profile. I also have my NAS sitting around the corner in my home office and the very low humming is actually very quiet, even with four WD Reds

The “server” is otherwise used as a personal gaming machine, it’s a pretty strong little fella and it’s running Roon like a champ

With the router and core and away from everything else. 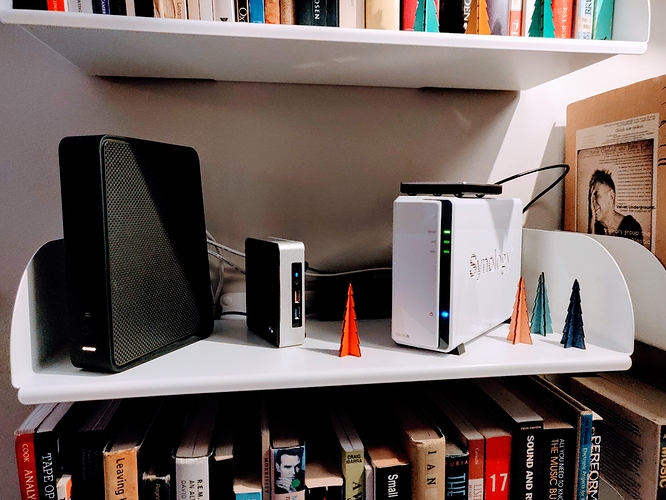