Who is René Baumann? 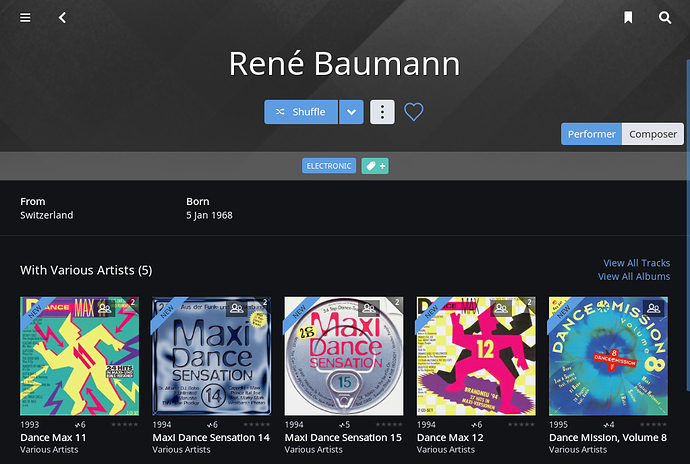 grafik.png1024×323 29.7 KB
Yes, I know who he is. But I never before saw him listed as performer by his real name instead of his artist (stage) name. I know that even in his home country, most people would have to look up the name in Google to make the connection to his artist name.
In Roon however, the use of his real name is consistently the case. Even a search for his artist name leads to René Baumann. But then … not even a biography or little explanatory text that connects the real name with the artist name.
How comes? Was there a lawsuit or something that prohibits the use of his artist name or is this just an unfortunate decision by one of the metadata providers?

It would be nice if in the future at least for the performer the artist (stage) name could be used (displayed). It would then also be consistent with the accompanying information on the back covers and in the booklets of the CD’s.

Peter René Baumann (born 5 January 1968), better known as DJ BoBo, is a Swiss recording artist, singer-songwriter, dancer and music producer. He has sold 14 million records worldwide and has released 12 studio albums as well as a few compilation albums which have included his previous hits in a reworked format. DJ BoBo has also released as many as 34 singles to date, some of which have charted high, not only in German speaking countries, but also in other European territories. As a dance music p...

Thanks for raising this issue.

This is a problem for us where a metadata provider credits an artist’s real name for composer and production credits and does not give us any information linking the two very different names to the same person. Some do it for accuracy (“it was like that in the CD booklet”) and some do it unaware that the two names represent the same person.

It gets really complicated for someone like Richard D. James. Better known as Aphex Twin, he has released material under all of the following pseudonyms / alter egos, including the full version of his real name:

Should we associate Richard D. James (composer/producer credits) with his (limited) release alter ego Richard David James, which is the closest name match, or with Aphex Twin, his most widely recognizable alias? What about Richard D. James composer credits on a GAK single, or on a Power-Pill track on a Various Artists compilation?

What should we do in the case of an artist whose new alter ego is dwarfed by the old one, but then subsequently transcends it? Or has multiple alter egos of equal standing?

Should we try and do something a bit more clever? Yes, and some of the enabling work has already been done. There is no magic bullet, but this is a current topic of discussion within the team and we’re in the process of figuring out a great solution here. We appreciate your patience!

And then there are the many different spellings for the same name – intentionally or accidentally, who knows? And not to mention the artists who have changed their real name – and since we live in modern times – some even their gender over time. I thought that’s why Roon uses external metadata providers that are specialized to sort this things right.

But what’s the point of artist names if they don’t show up in Roon? As I already stated, if you search for DJ BoBo you get the René Baumann results, so Roon knows about both names and that they are related but somehow decides to use the lesser known real name exclusively. That’s just strange.

On the other hand, at least for me, performances of Aphex Twin get credited as Aphex Twin and not as Richard D. James in Roon. O.k., it’s actually only one track so far

. And a search for Richard D. James or Richard David James returns nothing

What about a user who searches for Snoop Lion? Doesn’t he know about Snoop Dogg or is it intentional as he’s actually not interested in his other works as Snoop Dogg?

As I know who René Baumann is, and his works aren’t making up half of my library, I haven’t a problem to be patient. Please take your time to figure out a great solution.

Thank you for your answer and the insight about upcoming improvements @joel.

Many thanks to the whole team!