Why does my steamer sound better without roon

ok, so I have a roon nucleus. feeding the auralic aries, feeding the Gryphon Kalliope dac via kubala sosna realization usb. I have the hard drive plugged into roon with same usb. I have ran this setup with and without roon, so using the lightning ds app from an ipad and unplugging roon from the network and plugging the hard drive into the aries allowing it to manage the library and stream direct from tidal as well. There is a definite difference in the music and without the roon is better. now with it isn’t horrible or anything but I want to know why it matters. Do I have a setting wrong? is it something else or can we figure out.

One thing: I have one kubala fascination ethernet cable and in this case it stays plugged into the aries and the nucleus when in play to communicate via network is a regular ethernet cable. So what is roon doing with the signal if its not the streamer and is only the app or manager so to speak. How can it be a noticeable difference.

so in my setting and audio:
under connected to this pc:
system output not enabled
Realtek high def audio sst not enabled
kalliope asio 1.04 not enabled

under connected to core

living room which is the aries name not enabled

settings for the aries which is the only setting I have at this point:

Hi Neal, you’re not the first one to experience differences between Roon and Lightning DS playback through an Aries.

Which Aries is it you are using, the original Femto-clocked? Aries G1/G2? And, are they opted in for the Beta program? (Which firmware?)

The reason for these technical questions is that Auralic has made improvements regarding Roon playback in the latest firmwares.
I am using one Aries (Femto+LPSU) and one Aries G1 and today i can barely distinguish between Roon and Lightning DS playback.

One thing differs though, and that is the fact that i host my files on a remote machine, a NAS. This NAS is galvanically isolated from playback systems courtesy of a wireless bridge, which i have concluded makes quite a difference in quality.

I dont think your settings are wrong, the Aries should “Autodetect PCM capabilities” and everything else should be turned off/set to default.
Oh, deactivate any bluetooth/Airplay etc if you dont need those! 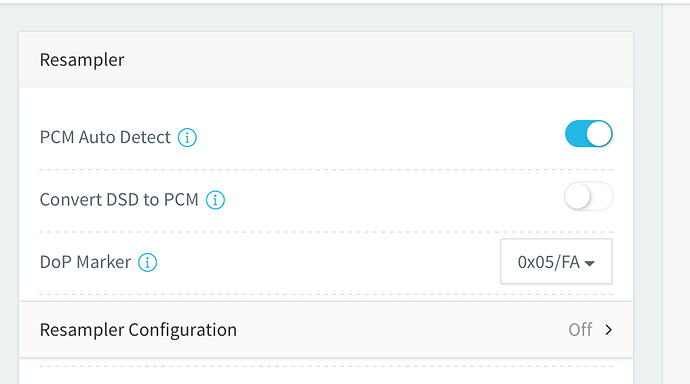 this is the original or discontinued aries I guess. I’m actually just borrowing it. I’m not sure about the beta or firmware. how would I tell? I need to return this one in the next few days or purchase it. I’m not even sure I’m getting the full use of the lightning ds app because it knows I’m not the owner of the device maybe. It said the old owner must approve, but its working for streaming and such and it will find stuff in my library. I just can’t figure out much more than that. Not as easy to learn as roon I guess. I was easily able to complete tons of play list on roon even as a newb…

I’ll check the settings. I think I’m in the market for either the aries g2, sonore rendu se optical, or bryston bdp-3. then the question is roon or not… I bought a lifetime membership to roon a couple of months ago. wonder if that is in any way refundable if I can’t get the sound wanted with roon in the setup.

Ok, so the little sticker with serial number says “Aries” and nothing more? In that case it is the original femto-clocked Aries.

You can see which firmware version you’re on going into the Lightning Devices settings under “Additional Operations” (or directly via a browser if you know it’s IP adress)
There you select Hardware Setup in the left panel, scroll down to the bottom.
If your device is in the Beta-program you’ll most likely see Version 6.1.1, if not its Version 5.8 i think?

You can try and get a flavour of Roons performance by connecting your Calliope directly to the Nucleus, you will gain some by separating server from endpoint, but the differences are slight.

I dont Think Roon membership is refundable, but it might be transferable. Seems a drastic move if you’ve already voted with your wallet in Roons favor by both the Nucleus and the membership?