Why isn't DR for each track displayed in album view?

Is the only way to view DR for each track in album via File Info? Why not show it in album view?

It is available under each track’s 3 dot menu. Click on the menu, select “View File Info” and it will give you both the LUFS volume leveling information and the LU Dynamic Range .

Available space in the track line seems to be very tight and space is at a premium, so that is probably why it is under the menu and not on the track line. Like View Lyrics.

I think there is plenty of space in the track row. In fact in general I think Roon UI does not effectively utilize space. There is just too much space everywhere.

@tboooe, our designers like space… lack of space feels cluttered and scary on first glance

Its absolutely brilliant that you have added proper Audio analysis metrics. Having the LUFS Integrated and TP figures available to be shown in other locations would be such a useful feature.

Perhaps a silly question but is DR info available when playing an album from Tidal?

is DR info available when playing an album from Tidal

No, but it’s something that we’d like to do in the future.

Can the DR stuff be switched off at all?
I mean I’m not sure if my tracks are being “volume levelled” or Replaygained and if they are would prefer them not to.
Still working out new features in 1.3…cant find the Replaygain OFF switch!

@Gaz_Jam The DR “stuff” is just audio analysis which is only used if you turn Volume Levelling on.

Volume Levelling is off by default and turned on in individual zones’ Zone Settings.

Hi Joel, my DR stuff is showing even with volume levelling off. Do you mean audio analysis needs to be off, for DR stuff to be off? cheers

While on the subject.
Does the R128 data get calculated on the fly when playing a library file?
At first local files seem to display (Legacy…) but if i check back a little later all the R128 data is displayed.

@dabassgoesboomboom The DR values are calculated during audio analysis. You can’t turn of the display of their values on the Album Detail screen, but you can for the albums on Artist Detail screens.

Just to re-iterate. The DR values themselves and their display are completely independent of the Volume Levelling settings.

@dabassgoesboomboom - in the Library Settings you can turn off (a) the background audio analysis of your tracks and (b) the on-demand audio analysis. If you have both turned off, then that means that you won’t be able to use volume levelling or crossfade features, but also you won’t get the pretty waveform displays either. 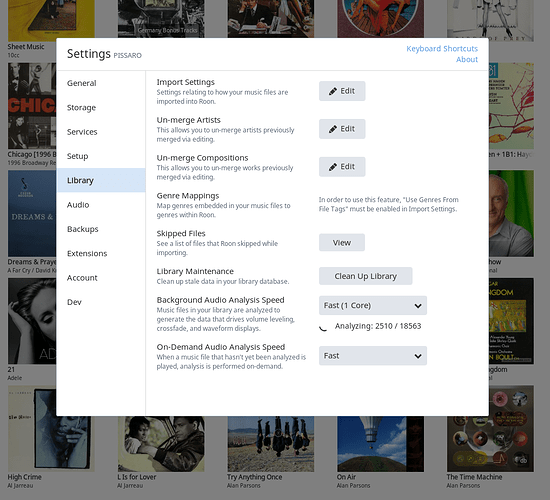 And that second setting (On-Demand Audio Analysis Speed) answers @Mikael_Ollars question - if that’s on, then when the track is played, analysis is done…

Alright, thanks @Geoff_Coupe!
I didn’t realize the library had to be reanalysed… But that also explains my slight concern over the unusually high CPU throttle on my server when “idling”

Seems the default setting is Throttle for both of these settings, can you elaborate what this means?

By default (i.e. throttled), Roon devotes roughly 30% of one CPU core to the task of background analysis, and uses 100% of one CPU core for on-demand analysis. While these defaults make the performance impact of audio analysis less visible, it also means that it can take a very long time.