Why no King Crimson?

There is an entry for Robert Fripp, but not for many of the bands he has been in, including King Crimson.

As a low priority query, any special reason why Roon has no entry for King Crimson ?

Must be because I have nothing in my local Iibrary and they’re not on Tidal. I shall have to remedy that with some cd purchases. I’ll remove the flags for the devs.

Yes, I think that must be it, I have identified entries for “Starless and Bible Black” and “Discipline” from CDs I’ve ripped from my (still not completely ripped, takes time) collection.

I’m a bit of a KC fan - have most of their output including box sets and also live albums (from DGM live). 131 albums in total (big box sets split into individual albums - one for each live gig). Roon recognises the studio albums and a few of the live ones and some compilations - about 35 in total.
The anniversary editions and the big box sets are not recognised.

If you can, worth catching the current KC on their Autumn tour (Europe).

I’ve got a full artist entry as well, along with most of the catalog in my library. Unfortunately Mr. Fripp has had some unpleasant experiences with record labels and, as far as I know, this has left him, shall we say, hesitant to put KC’s music on streaming services, so no Crim in Tidal, Spotify, or any other streaming service. Too bad, as it limits exposure to a new generation of listeners, in my opinion. 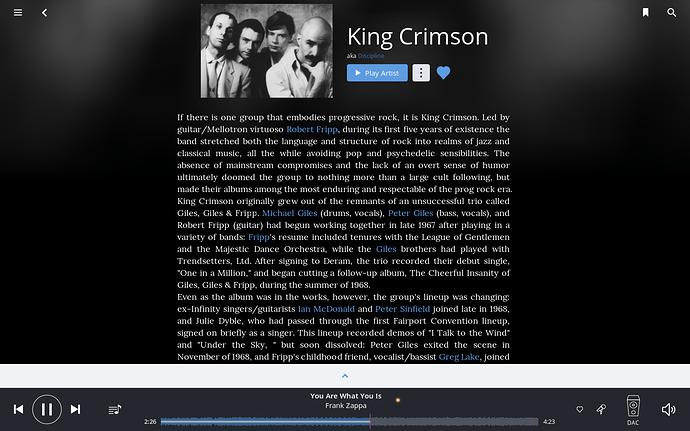