I don’t think the phantoms are technically capable of being Roon ready.

There are multiple revisions of the Phantoms. While I can’t speak to all of them, the Golds are more than powerful enough. In fact, they are more powerful than many Roon Ready devices out there.

They could of course come out with a Roon Ready Dialog.

Agreed, this should be a no-brainer.

Well, I stand corrected by the Master.

Would it be possible for you guys to do a similar thing to what you did with the Expert AIR implementation where you come up with a Roon ‘Dialog’ over WIFI?

It will be interesting to see how the Dialog will fit into the future. I think I can safely say that the plan is for Spark to be replaced by the new Devialet App. The talk around the Reactor is that it will support stereo playback without the need for a Dialog. Will the larger phantom have the same capability? Will the Dialog be a useless brick once the migration to the Devialet App is complete, or will they perpetuate Dialog as a way to increase the stability of the network connection.

Making it Roon Ready would be awesome.

Following up again on the “audio file is loading slowly issue.” With my upgraded 140 Pro, it seems to be getting a bit worse. I just had a case where almost nothing from Qobuz was playing on first attempt. Even a local album in FLAC 44.1 kHz format had to be started 3 times before it was playing without error message.

Maybe unrelated, but also in audio setup the Devialet still shows as uncertified and it has a generic symbol in the “now playing” bar. @support

They were just listed as Roon Ready on the Roon website. Hopefully the firmware will update tonight.

Maybe unrelated, but also in audio setup the Devialet still shows as uncertified and it has a generic symbol in the “now playing” bar.

@support While patiently waiting for the Devialet RAAT line art to magically appear (passed 48 hours), it occurs to me I don’t have any device specific device line art. Why not? What’s wrong here? [59]

When I skip a track in Tidal or Qobuz the first seconds are missing! I use a Devialet 250 Pro Core Infinity with LAN. Are there any other users who have this issue?

I noticed something like this on a few tracks yesterday, probably before I set a 50ms delay to allow for format changes. Will check again this weekend.

If you had searched a bit instead of starting a new thread you might have found this.

Which contains posts from people with similair missing of a few seconds of sound.

Please lets get all of us trying to get this fixed…

This seems to be getting lost in the noise of the slow loading problem.

Not the same thing.

Worth start a new thread?

Abandoned the RoonReady Devialet and reverted back to using the Allo digiOne.

More stable, Tidal doesn’t flash up network errors all the time, and group sync delay works. Plus I don’t get a playback delay on the kitchen zone waiting for the Devialet to power on.

For me the RoonReady thing works flawlessly. Actually I didn’t expect any change compared to the Air implementation, but this RAAT thing seems way more responsive. Really happy with it.

Here is the response to my push end of March:
Thank you for reaching out to us. My name is Mao from Devialet Customer Care. I apologise for the delay in getting back to you.

In regards to your first inquiry, it is indeed that the Phantoms are not compatible with Roon yet, however, you can still play files via Air-play. You will need to enable the AirPlay mode on Spark. Then enable the access to Airplay devices in the Roon Audio settings and you will be able to control the volume on Spark.

However, we do not have any updates/confirmed dates for Roon to be compatible with our Phantoms at this stage, therefore we are not able to provide you with further information.

Did anyone else get a user survey for Phantom owners from Devialet asking about how You might prioritize things on a development roadmap. Roon RAAT was one of the options listed. I’m not sure how many others got the survey (I assume anyone who registered their product should get it), but hopefully we all put RAAT at the top of the list and then mentioned it explicitly in every optional text box. I know I did.

Phantoms via Roon Airplay works, but sound quality not as good as Spark, Upnp.

Am a new owner. When was survey sent?

I also confirm no survey in my account of registered speakers and dialog@vaguedetails. @snoopy8, the reason the thread suggests pushing devialet on RAAT protocol is just that. the Spark app and using UPNP to play high-resolution files is not near as convenient or the experience of using Roon. When you use Roon right now without RAAT, you are limited to using Airplay in -between the two and Airplay is limited to CD quality resolution. it is because the high resolution files sound better (at least in my hearing, I heard 96k sound better, I could not hear a substantive change on my phantoms after that), that we all want RAAT in the phantoms so we can use Roon like we use it with Meridian or RAAT gear (ie bluesound) and are not limited to CD quality resolution. I received a follow up to my question which asked if I had anything further. I’ll ask if I get the survey.

Given that the Experts received RAAT not long ago, I am hoping that the Phantoms are not that far away. But then, it took a long, long time for the Experts to get there. …

I find Roon via Airplay to Phantoms is not as good the same music via Upnp. Even 16/44.1 is not as good with Roon Airplay, wth a diminished sound stage compared with Upnp.

I got the email on February 27th. Looked like this: 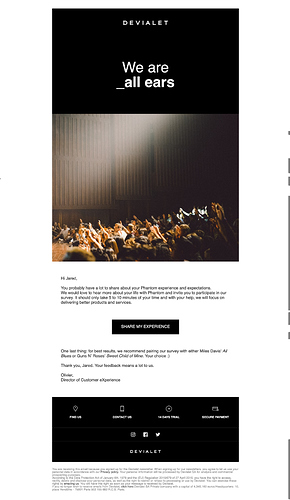 I just tried to click the link again to share some of the questions and it says:

This survey is now closed. We are now processing feedbacks and working on the next steps.

I guess I was part of a random sample. Seems odd they wouldn’t try to gather user voice from the broadest group possible, especially given that I would bet many users wouldn’t bother filling out the survey.