After seeing several reports of Windows 11 misbehavior, I decided to pull together a Windows 11 rig to run as a Core or client. Since, I didn’t have a new machine, or rather a new machine I wanted to run Win 11 on, I decided to give an older PC a work out since I have 3 i7 or better boxes lying around gathering dust.

After downloading the Win 11 ISO; I made a install USB with the Microsoft Official Win 11 image with no TRM and no Secure Boot requirements.

Plugged it up and went through the pretty lengthy install (it was slow). Setup Windows with local login only. Installed my non-Edge browser of choice and Roon. Copied about 1000 tracks to it. Added Tidal login.

Disliked the interface, since I have only run Windows with the taskbar on top. Downloaded Start11 and moved the taskbar to the top and setup the Start Menu to function like Win 7.

The PC runs quick and smooth really. And Roon runs fine even though it is on a HDD. (But, I didn’t think it wouldn’t given that I have gotten Roon running years ago on a 6700 Core 2 duo NAS with 20k tracks and no noticeable Core slowness.)

The problem with new versions of Windows is invariably the drivers required to make devices work with it. Unfortunately, even the onboard Ethernet chips are not always supported or can be very tricky to get working reliably. I have had to resort to USB Ethernet dongles for a couple of old machines (Vista or WIN 7 originally) to get them working reliably with WIN10 for example.

I only have one laptop eligible for upgrade from WIN 10 but as it is my Ableton Live machine I am adopting an ‘ain’t broke so don’t fix it’ approach.

I haven’t read anything about WIN 11 really, so what are the advantages of it supposed to be?

Given Microsoft’s stance on trying to bundle Windows 11 with new hardware sale’s and putting up warnings for older machines it seems a bit anti consumer. There is no reason that it isn’t supported on Gen 7 processors that is not commercial in nature (but it is their decision to make)

Windows 11 really is mostly a pretty skin on 10, with no real major differences besides annoying power user’s by taking features away. I have 2 machines running on it and I am using Start 11 along with some of their (Stardock software) other power software tools and it makes it quite nice. I still have a number of machines running windows 10 and they will probably not be updated.

I’ve got three devices running Windows 11 and four older devices still on Windows 10 (that will be remaining there until EOL of Windows 10 in June 2023).

I agree with @Michael_Harris that, for most people, Windows 11 is just a re-designed look and feel of the user interface. The cheese has definitely been moved, and some features used by power users are gone (and some are being put back by Microsoft in newer builds of Windows 11).

If you use touch or pen input, then there are definite improvements over Windows 10 in the new design. There are changes under the covers too, but most people probably won’t notice them.

Personally, I like Windows 11, it looks good and performs well for me; YMMV…

Geoff I have a touchscreen foldable Dell Latitude and that does work nicely with Windows 11. There are some nice new looking features in the multi desktop and multi monitor handling as well that I like. The two computer’s I migrated take advantage of one or both of these features so it’s a good upgrade for me.
I was hoping for Android app support to replace be old Google Pixelbook, but sadly that is lacking at the moment (outside of the US). 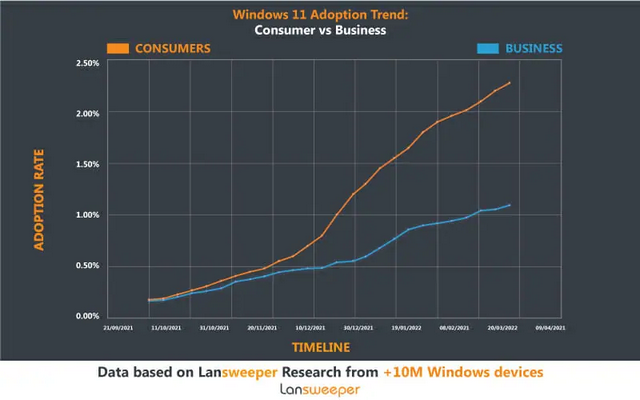 Market share at XP level, is the euphoria over?

[German]If you follow the press coverage, Windows 11 is a tremendous success - almost 20 % of the desktop market should already run with this operating system. But there are doubts - an analysis by Lansweeper suggests that Windows 11 will run on...

This is really someone who knows a lot about it and wants to keep the Internet world more secure and performant.

Uwe I followed that story last week, and from memory the figures were taken in 2020, so there are some questions over it’s validity. Windows 11 was not fit for purpose until the Jan/Feb 2022 update in my mind.

But I can say we only have a few user’s running Windows 11 out of 300+ PCs and laptops, so maybe it’s not a million miles away (as it was a business software company).

I’m not put off by Windows 11 either. Trial and error is always possible, but I don’t see any real progress since Windows 7.

I jumped into the Windows 8 and Windows Phone world full of enthusiasm and fell on my face.

No blood licking and with Windows 10 so slowly experienced that it got better, but it all takes way too long.

Now I always compare everything with Manjaro, LibreOffice & Co and Microsoft is no longer a pioneer in development.

I jumped into the Windows 8 and Windows Phone world full of enthusiasm and fell on my face.

I remember installing windows 8 and thinking W-T-F have you done. Back to Windows 7 I went.

I was hoping for Android app support to replace be old Google Pixelbook, but sadly that is lacking at the moment (outside of the US).

There’s a halfway house at the moment in the shape of the Your Phone app, which displays apps running on Android phones (or at least, my Android phone, a Surface Duo 2) in Windows 11.

Full Android support in an emulator would be better, I agree - I would be able to read my Kindle books at my desktop again. I miss that Windows 8 app…

Yes that is available in beta for us user’s at the moment, but general feedback is that the emulator is horribly broken and only works with the Amazon app store so that might actually work for you. That and the Comixology app would be the main usage case for me I think.

The my phone app only works with Samsung phones and Surface phone.
I have disabled it on mine as pretty useless with my OnePlus 9 pro

I have definitely an issue with running Roon Remote on a W11 computer.

Dis hope that the issue would solve in time, however, having my new W11 computer for 5 months and very systematical checking options and attempts to re-install Roon Remote, my conclusion is that Roon Remote does not run properly on W11.

Windows explorer sees and can access the streamer containing the Core Streamer&Player, so the network connection is fine. My older PC has no issues to run Roon Remote, nor has any of my android devices an issue. The issue only shows when trying to run Roon Remote on my new W11 computer.

Something is under the radar. But what is it?

Unless you raise a Support request and provide details of your issue together with your hardware and network setup, then Roon Labs cannot pull logs and diagnose the issue. As you say, there are Roon users, myself included, who have Roon remote running on Windows 11 systems without any problems.

I have been using Windows 11 for 2 months now and I find that the ergonomics have progressed and are more user-oriented.

I also thought that the evolution from Windows 10 to 11 was only mainly a cosmetic evolution, since no malfunction appeared before a problem (see the topic I recently opened in the Support section).

As Tony @Anthony_B pointed out there may be a compatibility issue with drivers that haven’t been updated.

Geoff @Geoff_Coupe , I would have liked so much that following my request in the Support section, Roon Labs asked for all my log files and could diagnose the issue.
I hope they will be able to analyze it and thus avoid this type of misadventure for other users, if necessary (some lines of the log file which seemed to be the problem having been published by Andreas @Andreas_Philipp1).

I’ll see if Support is in a position to get those logs and untangle this mess.

Thank you Geoff @Geoff_Coupe for all these explanations and insights.

I just got the Merging Technologies hotline this morning and they allowed me to reinstall the Merging Audio Device (Merging RAVENNA/AES67 Vitual Audio Device Installer - 3.2.0 build 50895).
Many thanks to them!
This driver works correctly again on my PC, even if officially this one is not compatible with Windows 11.
On the other hand, software like Pyramix or Pro Tools does not yet work on Windows 11.

So I came back to the same starting point of the beginning of last week.

You are right, although I find the members of the forum very sympathetic and undoubtedly competent on computer subjects in general, I will wait for Roon Support team to come back to me.

Geof, I’ll also duplicate this answer in the Support thread.