On the Roon downloads page it says “Roon Bridge for Linux runs on x86_64 and armv7hf and armv8 platforms.” without including the x86_32 version in that statement.

Below there is a downloadable .sh version available for 32 bit but no installers are listed in the “Easy Installer” options.

So far I am having no luck with the .sh script or the .tar on a 32 bit Intel x86 machine. I have been trying SSH remote as well as the terminal on the local Ubuntu install.

If someone could expand the details of this post with steps to enter in terminal I would appreciate it!
https://community.roonlabs.com/t/build-269-includes-x86-32-bit-linux-roon-bridge/32336

There is a Roon Bridge X86 32bit Linux Easy Install script. What happens when you run it ? You’ll need to install the dependencies.

Based on the ARCH variable in the script I would guess the commands to run the x86 easy installer script are:

Edit: I think that the -O in the curl command is meant to be a -0 (numeric, not alphabetical).

-0, --http1.0
(HTTP) Tells curl to use HTTP version 1.0 instead of using its internally preferred HTTP version.
This option overrides –http1.1 and –http2.

Edit: Nope, I’m wrong, it is alphabetical O, see below.

Let’s flag @danny to check that syntax. A KB edit may be in order.

Depending on where and how I enter the commands I get various inconsistent responses.

Sometimes it reports my system is not compatible or:

This OS is set allow administrator full permissions with my login.

I have tried placing the script in different places- root, Desktop, Opt, etc.

Using Lubuntu with Putty, WinSCP and the terminal in the local desktop.

Let’s also flag @support and see if they can help.

Run it as root

You’ll need something along the lines of …

I think that the -O in the curl command is meant to be a -0 (numeric, not alphabetical).

I think if you omit it, things will still work out, but it guarantees the remaining steps are using the correct filename.

Yes, it is an ‘O’. Unfortunately, the monospace font makes it look like a zero … O.

Thank you to everyone that has contributed their help!

The commands Martin_Webster posted are working fine. Unfortunately I am getting an error regarding system compatibility.

Error: This package is intended for x86 platforms. It is not compatible with your machine. Exiting.

This platform is x86 Intel and runs other distros like Vortexbox and the 32 bit version of Lubuntu I am testing this on now. 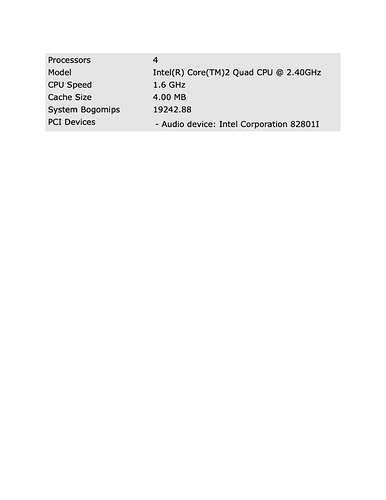 What’s the output from lscpu? 20k Bogomips doesn’t sound like a 32 bit CPU!

I think there might be an error in the 32bit script. It checks for a 64bit processor (same as the 64bit script) and exits when it can’t find one. Comparing the two they do the same _64 ARCH search, but it says ARCH=x86 in one and ARCH=x64 in the other. Is this meant as a 32bit install on a x86_64 architecture or is the script fauty? Maybe @danny or @brian can help clear this up?

Reading the KB it says here: https://kb.roonlabs.com/LinuxInstall “Roon Bridge for Linux runs on x86_64 and armv7hf and armv8 platforms” so it seems you are out of luck on a 32bit Intel processor unfortunately. Sorry for the ‘false alarm’.

This brings the issue back to my first post. There was an announcement rolling out a 32 bit version and it is listed on the downloads page.

Can support clarify if it is defective?

I believe the KB text wasn’t updated when the 32 bit version was added to the downloads page and that @ogs first above post about the 64 bit check being unchanged is likely to be the problem. Someone more proficient in Linux than I am will confirm.

Thanks for letting us know…we recently changed the scripts for an unrelated reason–it’s possible that something broke. It is being looked into.

I am encouraged that we are making progress.

There are stacks of 32 bit machines here that will make nice endpoints.

Is this the best place to watch for news?

Yes. Roon staff will report back into this thread. Thanks for your patience and to the other users who have contributed.

I am encouraged that we are making progress.

I re-read your first post. You say that also the tar archive failed to install. Did you retry this after you had the dependencies sorted?

I have been pulled away from this temporarily. I will certainly give that a try soon. Thanks again for your support!