Hello,
I have a zidoo neo alpa that can output native MCH DSD via secondary HDMI. It works very well with the built-in music software. The zidoo is roon ready & tested. If I want to play my DSD MCH via Roon, unfortunately only stereo comes up, from 5.1 to 2.0. In the Roon - zidoo settings I can’t set anything to 5.1. The signal path says 5.1 to 2.0 and analog output, it is not possible to change the signal path so that 5.1 can be output via hdmi. Why does this work with the Zidoo
Media player and not with Roon???

Have you contacted Zidoo?

Roon endpoints report back capabilities including channels supported. If the Neo Alpha is only reporting back 2 channels then there you go… no MC. Maybe this can be moved to support by @moderators and Roon Labs can confirm what exactly was certified via the Roon Ready program?

I’d also like to know if a multi-channel something is required to support the multi-channel part within the Roon Ready program or if that something can get by with 2-channel only. This would be a big bummer of an assumption and probably should be called out on the Partner pages.

Zidoo have not made its Roon functionality multichannel (yet). I’m not sure what is required to make this happen but they aren’t the only ones with multichannel AV capability that only do Roon in stereo. I suspect the best answer will come from Zidoo themselves as to what technical obstacles need to be overcome. I’ve got a Z10 Pro, multichannel music capability would complete it for me.

I think the Roon team either doesn’t want to or can’t program it. They always argued that there is no new firmware on the Oppo!! it is not possible to implement. But now that a product was roon ready! and also roon tested! even are only 2 channels possible, the thought is pretty close that Roon has no interest in Native Multichannel, although the devices themselves support it with their own software!!, without first spending huge sums of money on hardware that Roon then likes!! maybe it doesn’t even work properly with the insanely expensive hardware…
I am now really very disappointed with Roon, although I have 2 lifetime licenses, it’s just a better management software. Because the possibilities that Oppo or ZidooNeo Alpha offer, they don’t want to or can’t implement them!! I think that’s typical for a so-called premium product of today - a lot is promised and only delivered is standard…
I will sell my lifetime licenses, I wanted to listen to music in the best possible quality and not only read it :-((((

What nativeDSD MCH hardware is there? Which is also affordable and works for normal users of a high-quality AVR?
With an HDMI cable and not many, many cables and lots and lots of money.
I look forward to every recommendation from you.
Like I said Oppo and Zidoo just can’t do it with Roon??So
after some consideration

then it seems to me that the software is the fault??

It’s funny, it’s always the others’ fault.
As I have already said, with the software from the manufacturer it is absolutely problem-free! And it definitely sounds better!! than converted to PCM via Nucleus+…If you subtract 1 from 2, you’re left with 1!! or??
Apparently there are no native DSD MCH devices with HDMI output, unfortunately that is not the case (Oppo & Zidoo Neo Alpha). But these devices are not supported by Roon. With the Oppo I can still understand it (missing firmware updates, although I also wonder why they have to update something that works perfectly ??). But with Zidoo, is it a new device?
It’s quite simple, you have no interest or are able to make it possible for normal HiFi listeners to get good quality…

The same could be said about ATMOS and Roon.

I think the Roon team either doesn’t want to or can’t program it. 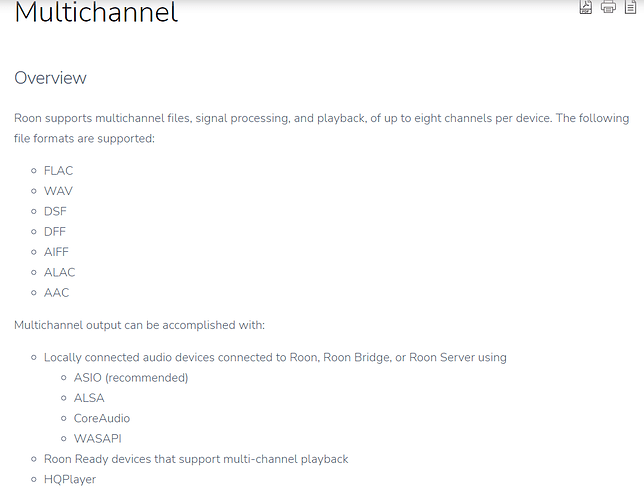 To read all of Roon’s knowledgebase article, click here.

And yes, the manufacturers are to implement RAAT it in their firmware - have you asked Zidoo about their missing Roon Ready multi-channel DSD capability, yet?

I think the challenge is to find any software to do what you want to do. If you can then Roon software could be part of the issue. The only software that I think might stand a chance is Plex being a hybrid music/film platform. If Plex works then perhaps Roon could be doing more.

Apparently there are no native DSD MCH devices with HDMI output

You’re stripping away a lot of complexities that are not entirely technical.

You have to remember that the only commercial format that supports DSD is SACD. SACD is still licensed by Sony. That licensing restricts how the DSD bitstream can be used. There are only a couple of players that even support digital out of the DSD bitstream from a SACD transport. One of them is Sony and only into a Sony AVR in that configuration. So, first you need to find a device that does not support SACD so as not to violate sending DSD out of the box which violates the SACD license.

Then, you want DSD over HDMI. The clocks for HDMI are kind of a mess. They are generated and follow the video signal. So, now you’ve got to find an audio thing that includes all the video hardware just to generate the clocks. Well, if they are going to build that they will probably just call it a Blu-Ray player and if they are putting a laser in it they will license SACD and we’re back to a licensing issue.

Roon has their own network streaming technology called Roon Advanced Audio Transport (RAAT). It already supports multichannel audio and it even lets you remap channels before the stream hits the network. That’s all Roon needs to do. So, this isn’t a Roon issue. Their part is done… they support the bitstream the device needs to decode the multichannel audio.

I’ve been looking for an “easy” solution for years. There is no easy or cheap solution here. The Zidoo Neo Alpha looks close… Have you asked why they don’t present multi-channel to Roon? They would need to fix this not Roon. Roon already supports it but it’s the Zidoo telling Roon that the device is only 2-channel.

Also, what’s on the other end of that HDMI cable that supports DSD?

Hello again,
At the other end is a Denon AVR 7200WA. I also asked the question in the Zidoo Forum. The answer was clear, since the device outputs native DSD MCH, the problem is in the internal configuration of Roon for the Neo Alpha. It is logical. If the hardware detection for Roon an roon ready device shows (I am not a programmer, but my mind tells me, that the software recognizes the hardware and not the other way round !!!) so that it also offers 5.1 with the Neo Alpha and not just stereo. But I think that will fail as with the Oppo. That’s really a pity. That would be a really great feature and would certainly make more subscribers or buyers possible for ROON. That is the future, I know the stereo league says something else, let’s imagine, the cinemas would still only offer films in stereo today? How sad that would be. I have e.g. many old quad shots from the 70s Santana, Moody Blues, Pink Floyd etc., if you have heard that and how much better you can hear the individual instruments !! Then stereo is like black and white films - very nice but a bit one-dimensionally over time. Quad did not fail at the time because it was bad quality, but only because of format disputes and the costs, but we should have this time behind us and think of the quality of music.

It is up to the hardware companies building Roons integration to work with all formats. Roons APi is fully capable of detecting and playing back 5.1 multichannel on equipment if they build it into their implementation properly. Sounds to me like the rushed it through without proper thought for the process.

There’s a new’ish topping dac with 8 channels that has a roon driver, it’s not exotic at 600 dollars.
Can be done.

Thank you for the tip, but for me to much cable…