Seems a flippant question I know and it’s also one where I almost hesitant to ask because I feel like I’m probably being dumb / missing something obvious!

But under artists where I have multiple album versions, I don’t see a Versions tab and I just see the albums represented separately on the page as they were previously. What am I missing?

PS thanks for the new release and the accompanying notes - exciting things to come it seems! Keep up the great work!

I think there is some bugginess in duplicates and versions:

I have here an album twice in my library. The files are identical, in fact one is an export of the other. The only differences are 1. one set of files has metadata and 2. one folder has a PDF in it too. Tracks are otherwise identical: there are no other editions of this (marvellous) album. Roon doesn’t automatically dedupe them. Even after reidentifying both they remain separate. And both albums have no “versions” tab so Roon seems entirely unaware there are two. As I recall 1.4 they would hav…

Is your Control device upgraded to 1.5 ?

But under artists where I have multiple album versions, I don’t see a Versions tab and I just see the albums represented separately on the page as they were previously. What am I missing?

I don’t think you’re missing anything - the new Versions tab is on the album page; use the Album browser, and when an album is selected to display the album detail, you’ll see a Versions tab alongside the existing Tracks and Credits tabs (if there is more than the one version available, that is)…

Thanks - had a look, but can’t see it there either unfortunately

So, just to be sure, you are not seeing something like this? 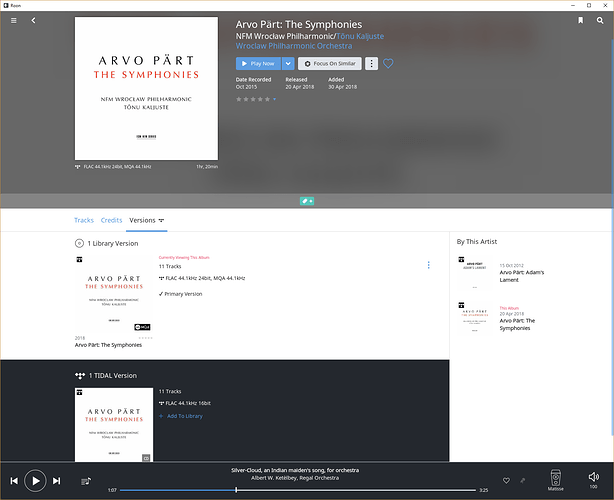 For example, I have two versions of several Marillion albums, but I do not see this tab on any of them (and the album/artist browsers continue to show multiple individual thumbnails for them etc.

Hi @Damian_Boys — Thanks for for the information on the behavior you’ve observed. The report is very much appreciated!

Just to confirm, you’re seeing this behavior for every instance in which you have multiple versions of an album, correct?

For the albums with multiple versions that you have, do these contain the same number of tracks?

I’m not seeing the version tab either. I have N+1 versions of The Who’s Tommy and Who’s Next, and on the artist page I see all of them listed individually, with no “Versions” tab on any of them when I click on them.

First thing is to check if your Remotes/Controls are running 1.5. If so then reboot everything.

If that doesn’t fix things then there may be some reason Roon isn’t identifying these versions as the same album. Do they have different numbers of Tracks ? Bonus Tracks can mean Roon treats them as different Albums. If so, you can tell Roon to group Albums as alternate versions in the Album Editor.

Thanks Andy. I’m only running on desktop, so everything is up to date.

I did notice that another album has a Versions tab (a classical one). Could it be because I already told Roon that these Who albums were not duplicates when they were identified that way originally? I wanted to see them separately so I could choose the correct one to play.

Also I don’t see any way to group albums in the Album Editor. What is the name of the button and tab? That entire interface is very opaque.

Hrm, I guess they do also all have different tracks (bonus, etc). If that’s enough to make them different then that’s probably what’s going on, but I swear previously they were identified as duplicates and I explicitly separated them.

I’m still curious how the album editor would work to group them.

Select the Albums you want to group and then click Edit in the top right. You should then get a Group Alternate Versions option as below: 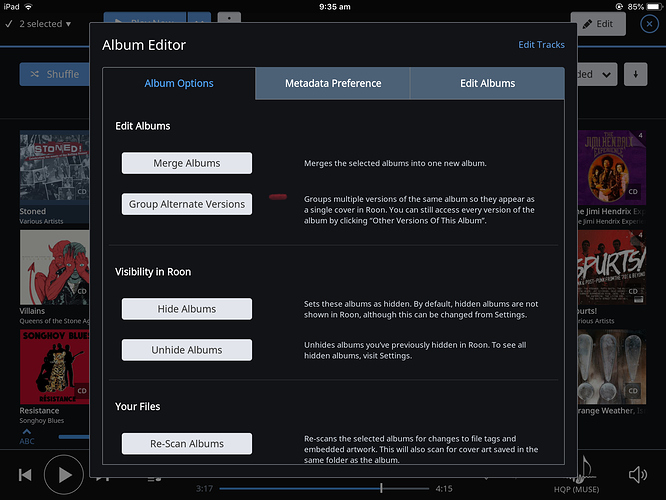 Wow thanks! I never would have figured that out in a million years

Yes - every instance at present.
Yes - same number of tracks (some of them have an additional disc also, if that makes a difference).

Two things to note:
For each one - the files are in slightly different places. All files are ripped to a USB HD attached to my Naim Uniti Star. If I rip via the Uniti Star - the files go in a ‘music’ folder, if I rip via my iMac, they go in a ‘downloads’ folder. I did this as I noticed if i ripped both versions on the Uniti - it just overwrote the previous version with the new version.

If I follow the details andybob put below (group alternate versions), then I DO get the versions tab! However, I still get 2 separate thumbnails in the album/artist browser views.

Hey @Damian_Boys — Thanks for the new information. It is very helpful and appreciated!

Yes - same number of tracks (some of them have an additional disc also, if that makes a difference).

Can you please expand a bit more on the above part of your post? Are these multi-disc album’s with the same number of tracks and discs, or do the different versions of the album have a different number of tracks?

Regarding what you mentioned about ripping files from different locations:

Re: Are these the exact same files ripped in two locations, or two different versions, each ripped a different way?

Two different versions, each ripped to a slightly different location (because the artist/album/title/track names are the same, so if I used my UnitiStar to rip them - it overwrites one with the other). 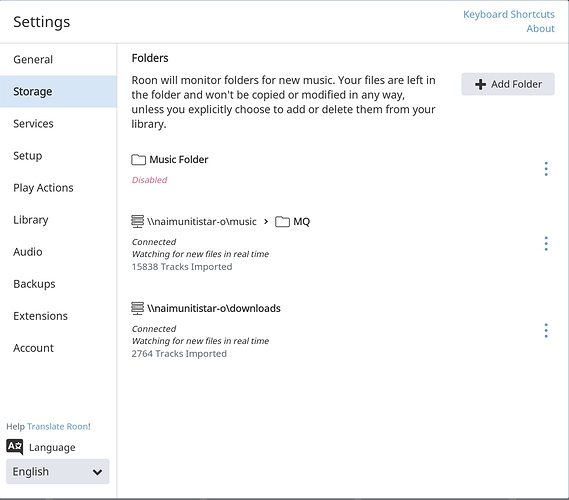 Hey @Damian_Boys — Thanks for the response, the new information helps.

When automatically grouping albums, Roon is looking at various data, including album length. In the example you provided, Roon does not automatically group them because they are two different lengths, Version A having only 1 disc with 11 tracks, and Version B having 2 discs with a total of 23 tracks.

It is possible to manually group these albums together. You can select each version of the album by right-clicking, click edit, and select the option to Group Alternate Versions. This will allow you to manually group albums when Roon doesn’t automatically do so. Hope this helps!